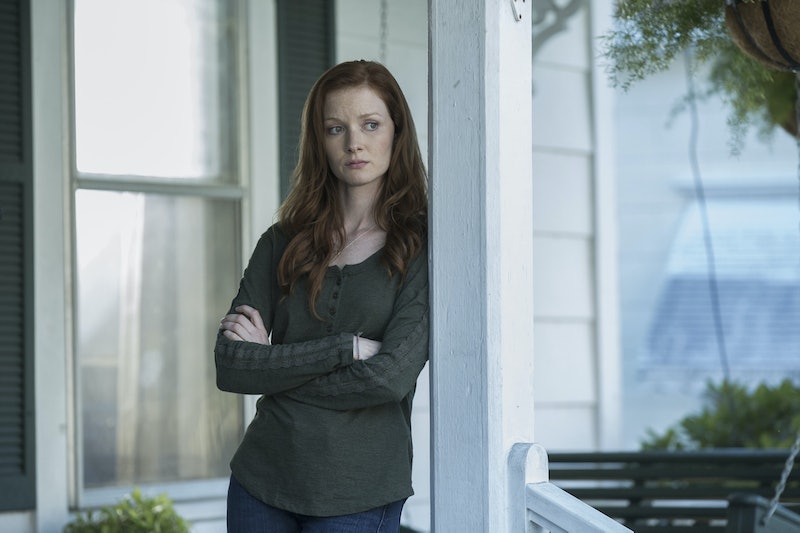 It's safe to say that cinematic nude scenes are two things: awkward (for those in them) and overused. Outcast ’s leading lady Wrenn Schmidt has been in the acting game for a while now, and after performing in her first-ever nude scene for Friday’s episode "Close to Home," she’ll be the first to suggest the former is true. When I spoke with the actor just days before the episode’s premiere, she admitted she had yet to tell her parents about her peculiar day at the office. Like many other actors, Schmidt won’t breeze by just how uncomfortable bearing her body for the sake of great storytelling is. And while she realizes her decision grew from commitment to her art, it seems she’s still coming to terms with the physical and emotional repercussions of stripping down for the world, while weighing in on why she thinks females have an unfair disadvantage in dealing with this issue more than men do.

Schmidt admits she’s avoided nudity thus far in her career because according to her, “it’s very rare that nudity actually adds something to the story.” Plus, there’s the whole getting naked thing. “On a personal level, I was totally flipping out inside,” she says. As if she wasn’t morally conflicted enough, she had her loved ones to think about. She says her parents, a father who’s a biology professor and mother who was a metabolic dietician, have enough of a difficult time understanding her career in Hollywood, never mind getting nude in front of co-workers.

“It’s gonna be a weird conversation to have with my parents,” she says. “That’s gonna be a tricky conversation.” While they’ve been incredibly supportive, Schmidt says, “It’s not really in their day-to-day, they think very differently about work and jobs. They’re like, ‘Do you have a real job?’”

It’s not like Schmidt was so easily convinced, either. Her internal conflict was put at ease once she discussed the reasoning with the director and suddenly, she “actually felt really strongly about the nudity.” Her character Megan is another victim who falls to demonic possession in the HBO thriller (and her acting is unreal). “We talked about the scene being almost like a really grotesque rebirth,” she explains. “I think any responsible actress is like, ‘We’re not showing this, we’re not showing that,’ but once I made that commitment based on the fact that it added something to the story, I was really excited about the opportunities within the scene. That’s the artistic standpoint.”

Once she made her decision and committed to it, the scene still presented many challenges. First was attempting to be comfortable in front of her co-workers, which she says varies for everyone. “For me, that first shot that we did that day was not just jumping into a cold pool, it was jumping into an ice bath,” she says. Fighting the discomfort and holding onto the integrity of her character was no easy feat. “You don’t want your personal experience of discomfort to impact the character’s experience even though you’re having a wildly different experience,” she says.

And once she overcame that mental hurdle, there were physical ones. “We shot most of that scene in a bathroom in one day, it was about getting the stamina of how cold it was in the studio, consistently being wet, sticky from fake blood, putting things on your nipples and then ripping them off. It’s one of the most unglamourous aspects of the job,” she explains. Thus, sexy or not, Schmidt says nude scenes are “always very uncomfortable no matter what.”

On a bigger scale, Schmidt is just one of the many actors who have shown breasts, thighs and butt on screen. And although the Boardwalk Empire alum doesn’t go fully full-frontal, she recognizes how there’s sadly still a double standard regarding frontal nudity of men and women on screen. Take Boardwalk, for example, which had an extremely uneven bush-to-penis ratio. Or Fifty Shades of Grey . While men do bear all on screen from time to time, there’s denying what we see more of.

Now that Schmidt has been somewhat involved with this behind-the-scenes process, I can help but ask: What is the deal here?

“It’s still something that’s fairly taboo in our culture,” she says. “I feel like this is tricky territory — there’s a double standard between men and women because there are just different expectations about what an audience wants to see.” She elaborates on how dated expectations of what’s appealing to the male verses the female sex still prevail on screen:

With guys, it’s like muscles and action and being tough, I mean, I’m talking really broad strokes here. With women, it’s playing kind of all the different aspects of what males find attractive, whether that’s being sexy or alluring, at the same time you’re vulnerable. People think that nudity is important or satisfying some component of sexiness or being raw and gritty. Unfortunately for actresses, it’s expected more often than it is of guys.

Still, Schmidt looks back at making her commitment with careful consideration and integrity, and it pays off, as the scene not only displays just how talented she is, but it truly makes the entire episode.