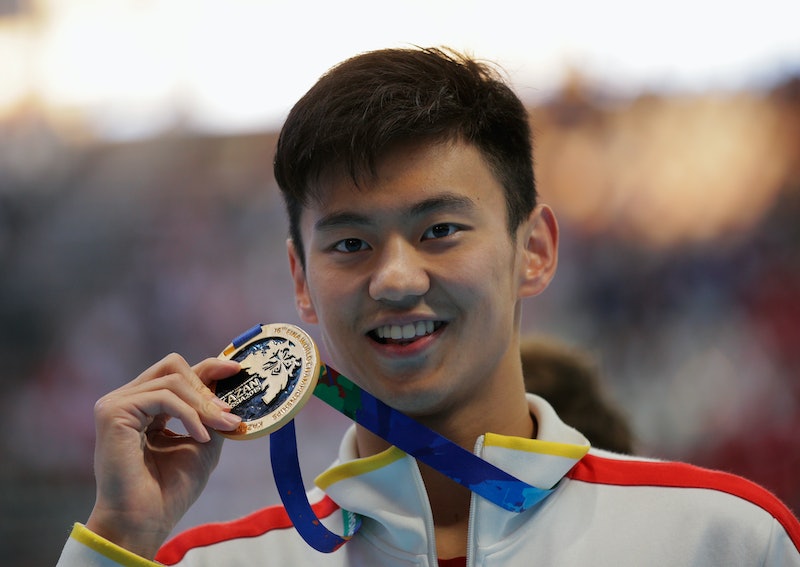 As Olympic athletes arrive in Rio de Janeiro for the summer games, the internet has been buzzing about a particular competitor. Twenty-three-year-old Chinese swimmer Ning Zetao is causing quite a stir because, well, of his looks. Like Michael Phelps and Ryan Lochte before him, Zetao is one of the athletes at the Olympics who might not only win gold but also your heart.

Zetao was featured on the August 2016 cover of Elle Men China. The country is so taken with the handsome guy that he's earned the nickname "Baozi," which means "steamed bun," and has even used it himself. Despite rumors that he wouldn't be able to participate due to too many commercial engagements (as we know, the Olympics are very strict about advertising), he is currently training with his team in Rio.

Zetao is a very talented swimmer (obviously, he made it to the Olympics), and there's a lot you might not actually know about him. With all of the attention he's garnered on social media leading up to the Games, many are curious to learn more about him. Here's what you should know about Zetao before watching him compete against the swimmers from around the world during the 2016 Rio Olympics:

He's A Lieutenant In The Chinese Navy

That's right, Zetao has the drive and determination of not just an athlete, but also a member of the Navy.

This Is His First Olympics

He's a newbie, and that is always something interesting to watch at the Games. He'll be competing in the 100- and 50-meter freestyle races that take place on Aug. 9 and 11, respectively.

He Already Made History

Last year, Zetao became the first Asian man to win a medal at the 100-meter freestyle race during Russia's FINA World Championships with a time of 47.84 seconds. Impressive.

He Was Once Banned For Doping

In 2011, Ning tested positive for clenbuterol, and it got him kicked out of the pool for a year. He and other athletes who also were found with clenbuterol in their systems claimed that it came from eating meat (from livestock that were fed the chemical). But since his ban, he's made a great comeback and is set to compete.

Maybe he'll follow in Ryan Lochte's footsteps and get his own reality show after the Games. There's certainly a viewership ready and willing to watch.