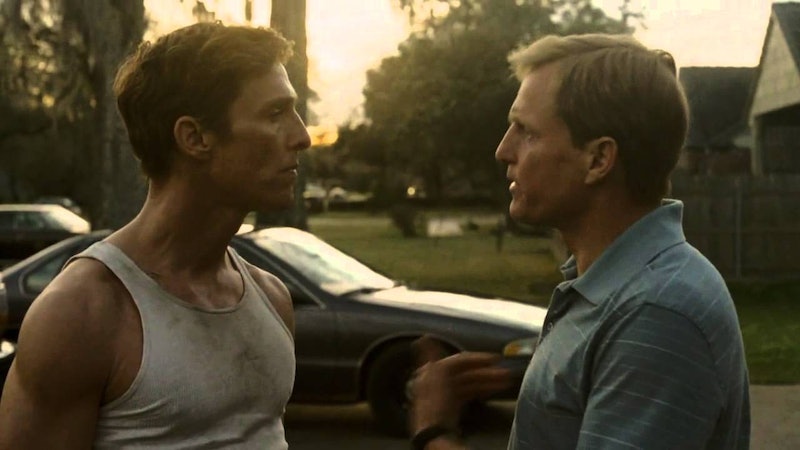 The finale of HBO's eight episode crime drama series True Detective aired Sunday night to overwhelming anticipation and technical glitches. And for a series that delivered the network its highest-rated debut since 2010 and has been regarded as the "best show on television," Sunday night's last episode, "Form and Void," seemed to be a hard pill to swallow. For some, the episode provided an undesired, but necessary closure for the show's two troubled protagonists. For many others, the finale failed to carry out the numerous conspiracy theories circulating the Internet for a climactic conclusion.

If you've been a loyal follower of the series, but did not see the finale episode, you still know just about as much as anyone who did. The Spaghetti Monster, Childress, is the man the camera zoomed in on mowing the grass at the end of Episode 7. In fact, thanks to the blatant camera direction, it was all too clear. He's the killer, he's guilty, there's no puzzle or questions about it.

Once the final episode was over, complaints instantly emerged about where the episode severely lacked. For those who listened to writer Nic Pizzolatto's suggestions that the finale would not consist of a mindblowing spectacle, their minds were at ease when the episode turned out to be a logical wrap-up. For those who did not heed Pizzolatto's advice, they were in for a rude awakening. Here are the main criticisms unhappy viewers expressed:

Sitting through the finale episode, some hoped there would be more to the story than what we already learned. But, after an hour of Rust and Marty catching up to what we already knew from Episode 7 and a bloody brawl in a cavern with a knife and an axe, all those hoping for a twist eventually realized there would be no punch line. Aside from the bloody gore, an unsettling romantic relationship between half-siblings, and the detectives surprise survival after being hacked alive, there was nothing new on the table. Looks like we all should have listened to Pizzolatto and took his words at face value.

A finale episode, especially to an eight episode series, is crucial. If everything isn't tied up into a neat red bow, faithful viewers suffer a void. For True Detective, there were a series of loose ends that were never explained, specifically regarding Marty's daughter and her erratic behavior. After it was revealed that his daughter played strangely with dolls as a child and had sex with older men as a teenager, viewers were lead to believe that she was somehow involved in the case or would be a victim in the end. In hindsight, those plot points can be explained as paranoia from Marty as he dug deeper into the case and eventually became engulfed by it.

Additionally, viewers spent the entire season watching Rust and Marty being investigated by two policemen, yet we never see a conclusion or substantial reason behind their work. In retrospect, they are just a vehicle for the show's narration, but nevertheless, it seems like a waste of character work for the two cops.

The rest of the cast disappeared

Throughout the series, we've met many characters: the entire Hart family, Marty's lover, Lisa Tragnetti, Rust's date, Laurie Perkins etc. Yet the finale episode mainly focused on Rust and Marty. Aside from a glimpse of the entire Hart family in the hospital, we never get to learn what happens to his daughters or why Maggie decides to come back to him after years of philandering with other women. While the finale does provide substantial closure to both Marty and Rust's story lines—Marty gets his family back and Rust finds optimism after his near-death experience—that's where the buck stops. All of the characters we've gotten to know over the last two months were left in the dust and we're a little bitter about it.

Overall, your experience with the show is highly based on your original intention for watching. If you watched the show hoping to unpack a cryptic conclusion at the season's end, you'll never find it. If you watched for artistic dimension and depth of character, you will be satisfied—just make sure you decide what you're looking for before Season 2 premieres.