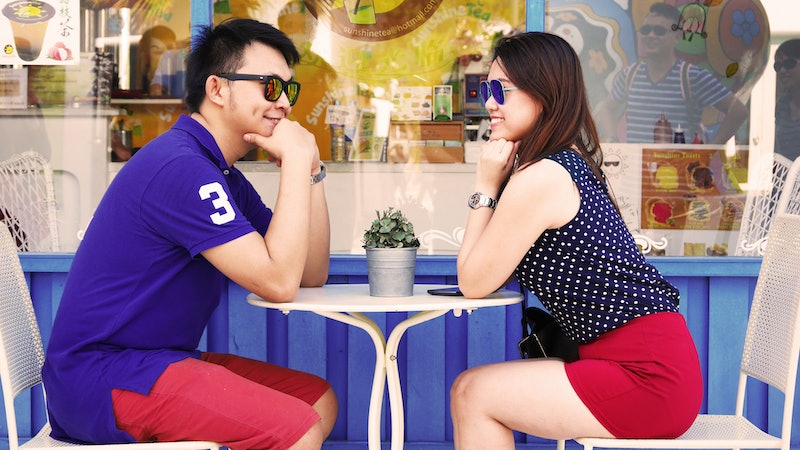 Above everything else, relationships are supposed to be truthful and honest. So the moment you suspect your partner is lying to you, it can shake the whole thing to the core. It doesn't matter if you pick up on little fibs, or sense a major coverup, dishonesty almost always spells disaster for a relationship.

Once lies are introduced to the mix — for whatever reason —all sorts of problems start to occur. "It leads to suspicion, interrogation, questioning, blame on the part of the partner who has been lied to ... and at times a sense of helplessness and hopelessness for the partner who broke the trust," says NYC-based marriage and couples therapist, Irina Firstein, LCSW, in an interview with Bustle. "It creates a negative cycle of predictable and repeated accusations/defensiveness which erodes at the core fabric of trust, mutual respect, and love."

It's a bad situation, for sure. But it is possible to save yourselves the drama, and even save the relationship. Of course you can only hope your partner will come clean and put an end to their lying ways. But if not, it may be necessary for you to approach them and clear the air. Check out the signs below that your partner is being dishonest. If you spot them, call your partner out ASAP — it may end up being a relationship-saving relief for you both.

Intuition is a pretty reliable thing. It tells you not to walk down certain shady streets. It steers you away from particularly lonely parking lots. And it's also what makes you feel "off" when dishonesty is afoot. "If you are a trusting person ... and all of a sudden you have this sickening feeling in your gut that something is going on, chances are, it is," Firstein says.

When your SO has something to hide, they'll likely evade your more prying questions. "If this is not how your partner typically behaves, it can be a signal that something is up," said Terri Orbuch, Ph.D., on Psychology Today. "It may feel like pulling teeth to have a conversation, and when you ask direct questions, your partner may avoid answering, or just repeat, 'I don't know.'"

3. Their Body Language Doesn't Sync Up

When someone is lying, it can be pretty easy to spot. The biggest sign? A total mismatch between body language and what's being said. "The words sound convincing, but everything else about their body language sends a very different message," Orbuch said. Think along the lines of nervous ticks, or tense actions even though they say they're relaxed.

4. They Cover Their Mouth

Most liars feel at least a little bit guilty about their fibbing ways, and it can cause them to want to hide. They may put their hand over their mouth, or rub their eyes, according to Laurie Moison on HuffingtonPost.com. They may even turn away when dropping a particularly heavy lie, all in an attempt to appease their pain.

5. You Notice They're Being Vague

Someone with nothing to hide will be open and honest about their day. So if your partner is being vague or secretive, it could be a sign they are up to no good, according to Firstein. Perhaps you ask "what are you up to tonight?" and they respond with "I'm out." Cold, short responses like this are never a good sign.

6. Or, They Are Overly Detailed

A lying liar can also go too far in the other direction, to the point where their stories are overly detailed. "Ask most people what they were doing last week and they’ll have to pause and think about it," noted Arianne Cohen and Lindsy Van Gelder, in an interview with Julia Chung on Real Simple. A liar may prepare their answers ahead of time, and then overload you with details in an entirely unnatural way.

As your partner responds to questions, you might notice their voice going up in pitch. They might even make a few grammatical mistakes as they clamor to twist the truth, according to Orbuch. This will also be the moment when their body language doesn't match up with their story, so keep an eye out for that, too.

8. The Phone Becomes A Huge Issue

Phones can become a major player in dishonesty. You might notice your partner hiding theirs when you walk into the room, or texting away earlier in the morning or later at night than usual, according to Firstein. Such sketchiness will likely set off that intuition, and it won't feel good.

9. Their Stories Are Inconsistent

Not that you should grill your partner under a dangling lightbulb or anything, but do take notice of inconstant story lines. If they are being dishonest, their stories will likely be riddled with holes or things that don't add up, according to Heather Hatfield on WebMD.com. All signs they are a lying liar.

If your partner changes up their routine, there's no need to immediately assume the worst. But sometimes a basic change in day-to-day activities can be a bad sign, according to Firstein. It could be they are making time to do sneaky things behind your back, so it's definitely worth noting.

11. They Beg You To Trust Them

A partner who has something to hide might unconsciously ask you to trust them. Their stories will be peppered with words like "honestly, or "trust me," according to Moison. It may seem innocent, but it's likely just guilt seeping through as they try desperately to convince you things are a-OK.

Unfortunately, if your partner is going to such lengths to appear honest, or is acting super strange in other ways, it's much more likely things are not a-OK. If you suspect that to be the case, set aside some time to talk with your partner. If they can spill the beans, there's still a chance for a healthier relationship.