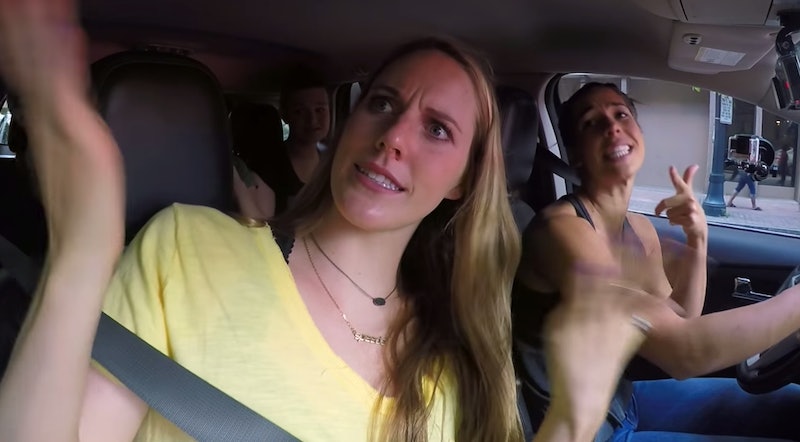 What better way to start your trip to the 2016 Summer Olympics in Rio de Janeiro, Brazil than jamming in the car to some sweet tunes with your fellow teammates? That's exactly what happened when the U.S. Olympic swim team did carpool karaoke. Let's just say James Corden would be proud, especially when watching swimmer Missy Franklin's carpool karaoke skills. Don't get me wrong, the other swimmers, including Michael Phelps, Nathan Adrian, Maya DiRado, and Allison Schmitt are just as entertaining, but Franklin absolutely steals the spotlight.

Their song choices range from One Direction's "What Makes You Beautiful" to the Friends theme song to Carly Rae Jepsen's "Call Me Maybe" to Zac Brown Band's "Chicken Fried," which just goes to show you that the U.S. swim team has an eclectic taste in music with some choices being good and some not so good. The winning song choices are most definitely Fifth Harmony's "BO$$" and Miley Cyrus' "Party in the USA." You can't really head to the Olympics without busting out some Miley Cyrus, right? What makes for a better anthem?

Franklin did both songs justice and proves she needs her own carpool karaoke segment with Corden. Here's hoping The Late Late Show host invites her to join him, stat. With that, let's check out just how amazing Franklin is at karaoke. Trust me, after watching her in action, you're going to want her to accompany you every time you drive.

She Starts Off Strong

Her Nae Nae is on point.

Her Hand Movements Are Everything

Shout it out, Missy.

She Embraces The Lyrics

She Is Loving Every Minute

This is how every car ride should go down.

She Is A Helluva Dancer

Yeah, swimming isn't her only talent.

She Is Also A Fabulous Actor

"Look to my right and I see the Hollywood sign."

She Can't Help But Become One With The Song

There's just too much pressure and she's nervous — just kidding.

She Is A True Carpool Karaoke Star

My apologies to anyone who will now have "Party in the USA" stuck in their head for the remainder of the day.