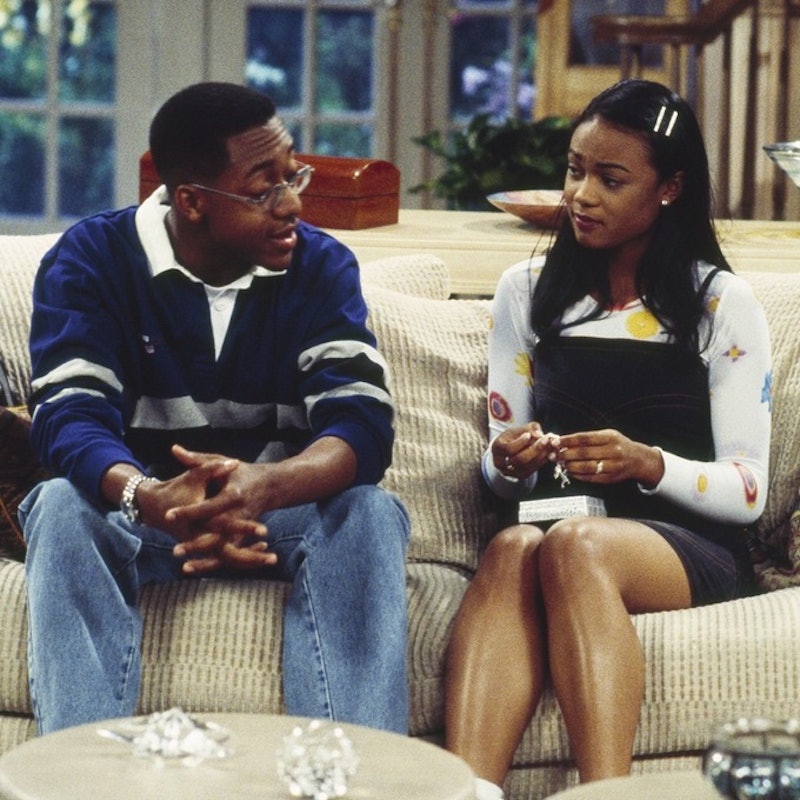 There's a reason why people are still talking about The Fresh Prince Of Bel-Air over 25 years after the pilot episode first aired. Not only could the show be funny enough to have you rolling around your living room in hysterics, but it could also be outstandingly real and heartfelt. I'm sure I'm not the only one who remembers those emotional episodes of the Fresh Prince Of Bel-Air with a fresh, glistening tear in their eye. Many of those episodes tended to revolve around Will, Carlton, or the overall family dynamic, but there's one particular episode that no-one appreciates enough: the Fresh Prince episode where Ashley considers having sex for the first time.

Not only does the episode focus on the, frankly, underrated daughter of the Banks family, but it also deals with sex in an incredibly real, progressive, and even empowering manner for women. The episode (titled, "Not With My Cousin You Don't") begins with Ashley enjoying a cuddly, casual date with her boyfriend Derek in the Banks house. It's clear that they're very much in love, and their dynamics together show that they're in a healthy relationship, full of mutual respect.

After making out for a little bit (and being interrupted by Will, who takes a polaroid of them both, because why not), Derek gifts Ashley with an adorable bracelet that references their first kiss. Then, he bravely propositions the idea that they "make love" for the first time. Ashley, caught completely off guard and clearly a little stunned, responds by shrieking, "together?"

What makes the episode so great is how Ashley is given complete agency over her storyline. Though there's a brief subplot where Will overhears her talking to her friends about having sex for the first time and takes it upon himself to try and control the situation (classic Will), for the most part, the topic is explored through Ashley's perspective only.

The episode carefully avoids the standard tropes of other family sitcoms — which have a tendency to use such a plotline to deliver messages about the dangers of sex — to instead focus on the idea that this is Ashley's choice. The character is celebrated for her intelligence in the episode, and it's made clear that she has the right to ultimately decide what is right for her and for her body. That's gleefully progressive.

The key moment in the episode that highlights this fact is an incredibly moving conversation between Ashley and her sister, Hilary. Seeking some advice about whether or not she's ready to have sex yet and what the implications of her decision may ultimately have on her life, Hilary delivers a stunning speech which, frankly, should be given to all young women during sex education.

Hilary talks about her first love, a guy whom she fondly remembers as having a "buff" body (good on you, Hilary), before going into detail about the first time they ever had sex together.

I can just tell you that for me, Lawrence and I really loved each other, and we both felt that we were able to make a responsible decision. We decided that the time was right.

When Ashley asks her whether she had any regrets, Hilary reminds her that he was buff ("hello!"), before reminding her sister that she's more than capable and responsible enough to decide what's right for herself, on her own:

Only you know if you're ready or not. Ashley, for as long as I can remember, you have been independent, responsible, and smart. I know you're aware of all the issues, and whatever decision you do make, I'm always here for you.

Don't mind me, I'm just sitting here crying while I write this. The conversation isn't just vital for how it reminds young women of their agency, their intelligence, and their right to decide what's right for their own bodies, but also for how it provides a beautiful shared moment between two women. It highlights the power and importance of female relationships, and how crucial those support systems are to women, particularly at such a major time in their development.

It's a genuinely touching moment, and one that any woman who had a best friend, sister, cousin, mom, auntie, or grandmother around to offer such positive platitudes to them can relate to. These conversations are important and The Fresh Prince Of Bel-Air should be applauded for celebrating that fact, and for also dealing with the topic in a refreshingly real and positive manner.

The episode ends with Ashley ultimately deciding that the timing isn't right for her and her boyfriend to have sex, as they're in a long-term relationship and he's due to leave again soon. The decision is a sensible one for their situation, but it's also refreshing for how Derek accepts her choice, and also agrees. There are no arguments over the fact, no negotiations over it, and no belittling comments concerning it. It just is. They love and respect each other enough to wait.

Watching this episode as a teenager imbued me, and I'm sure many other young women, with the idea that sex doesn't have to be an embarrassing topic to talk about or a terrifying and complex one to consider. At the end of the day, sex can be as simple as trusting in your own instincts and intelligence and sharing the decision to be intimate with a partner who loves and respects you. The Fresh Prince Of Bel-Air was one of only a few shows in the '90s that managed to deliver this message properly, and as such the episode deserves a greater appreciation than it currently receives.

More like this
David Schwimmer Doesn't Remember This Classic 'Friends' Episode
By Sam Ramsden
'Derry Girls' Sister Michael Isn’t As Fictional As You Might Think
By Olivia-Anne Cleary
The 'Hocus Pocus' Sequel Finally Has A Release Date & It Makes Total Sense
By Shannon Barbour and Radhika Menon
Hayden Panettiere Will Return For 'Scream 6': "We F*cking Won, Scream Fam"
By Jack Irvin and Jake Viswanath
Get Even More From Bustle — Sign Up For The Newsletter