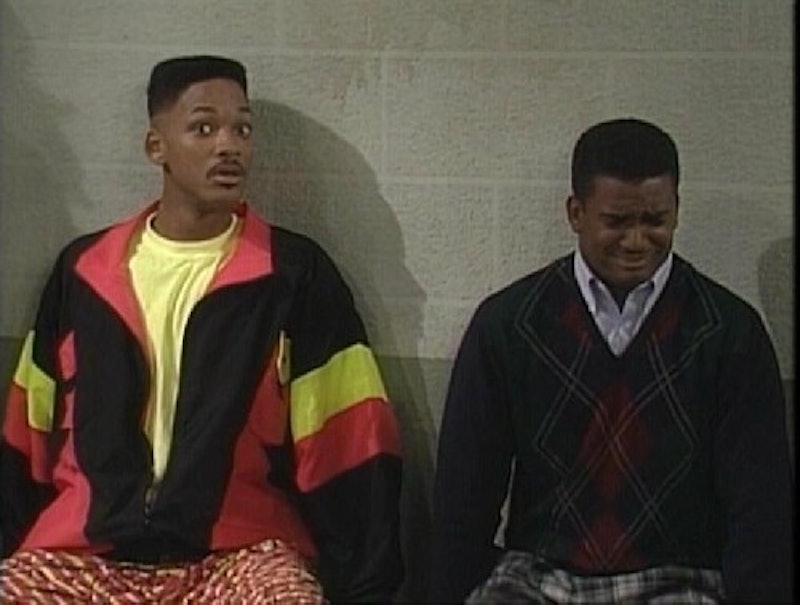 I've seen every episode of The Fresh Prince of Bel-Air several times over. I know all of the jokes, dances, and songs and yet, the show still makes me laugh until the point of crying. It's very difficult for comedy to be so timeless that it's relevant two and a half decades later. Perhaps that is why the Fresh Prince is so magical. Like many of our other favorite sitcoms, Fresh Prince is the show to turn on when you need some comedic relief. That said, Fresh Prince had serious episodes as well, because it wasn't all games and laughter. The show remains iconic because of the real world lessons that it interjected throughout the series. During the pilot episode, Uncle Phil reminds Will that he isn't in Bel-Air for a vacation; he was sent to live with the Banks to grow and learn as an individual.

In the course of six years, Fresh Prince dealt with some very heavy issues, and Will's journey to adulthood didn't always accompany a song and dance. As an African-American male, he faced real adversity and obstacles that he had to overcome. The show wasn't afraid to address these issues, even if it meant reducing both its audience and cast members to tears. The show was multifaceted, and, as much as we turn to it for a good laugh, we can also turn to it when we need to cry. Here are seven Fresh Prince episodes to watch if you need to shed a few tears.

During the pilot episode of Fresh Prince, Will arrives in Bel-Air and begins stirring things up in the Banks household. He immediately labels his family as bougie and out-of-touch, and he believes that they are embarrassed by his presence. After ruining a dinner party, Uncle Phil lets Will know about the unimaginable adversity he, too, faced. From that moment on, The Fresh Prince would set itself apart from other sitcoms of the era.

In the sixth episode of the series, Carlton and Will are targeted by the police and pulled over for stealing a car. Coming from West Philly, Will has experienced, and understands, police discrimination — especially when it comes to black people operating expensive vehicles. While Uncle Phil and Aunt Viv are just as outraged as Will, Carlton is confused; he still has faith in the system. Will tells him, "I hope you like that system, because you're gonna be seeing a whole lot of it during your lifetime." This episode is iconic because it foreshadows what's to come.

In episode 19 of Season 3, Will is overwhelmed by the demands of his studies, work, and his role on the basketball team. When he has trouble staying awake, a classmate offers him Speed. Though Will never takes the pills, Carlton ingests them after mistaking them for vitamins. Carlton has an adverse reaction the illegal drugs and he lands in the hospital. Distraught over causing Carlton's near death experience, Will comes clean to his family. This episode really shows how Will and Carlton have bonded, as Will comes to terms with almost having lost his cousin.

4. "Home Is Where the Heart Attack Is"

The Fresh Prince was known for poking fun at Uncle Phil's hearty appetite. However, during the fourth season of the series, Uncle Phil has a heart attack. His health is no laughing matter, and the entire family, except Carlton, rushes to his side. After finding Carlton back home at the mansion, Will confronts him about not going to visit his father in the hospital. Though Carlton is adamant about not seeing his father in a vulnerable state, Will tells him he's lucky to have his father in his life.

The fourth season of Fresh Prince has probably the saddest and most tear-worthy moment of the entire series. In the twenty-fourth episode, Will is reunited with his absentee father Lou after 14 years. After giving his father a second chance, Will and Lou spend the entire episode trying to rebuild their relationship. Though Will and Lou plan a trip together, Lou bails on him at the last minute. Will breaks down to Uncle Phil in what is probably the greatest scene of the entire series.

In the fifth season of the series, Will and Carlton are held up at gun point, and Will is shot. Carlton is furious, and he feels that the justice system has completely failed them. Carlton's anger drives him to consider buying a gun. While laying in a hospital bed, Will convinces Carlton that a gun is not the solution to their problem. This episode shows just how far Will and Carlton's relationship has progressed. They are not simply cousins; they are also best friends.

In the series finale of Fresh Prince, the Banks' family and Will move out of the Bel-Air mansion to continue their lives elsewhere. Will reflects on his accomplishments, and lack thereof, since first arriving in California. When he turns off the lights for the last time, we all know it is the end of an era.