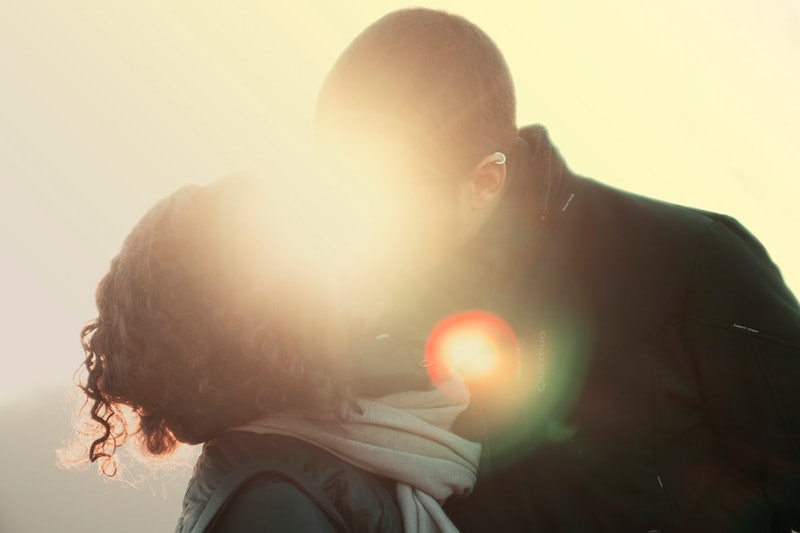 Call me old fashioned, but I think the best way to find out if your partner will or won't want to take things to the next level is to ask them. I know, it's kind of crazy, right? But still, we live in a world, and a dating culture, where sometimes we have to speculate. Where sometimes our actions and our words don't speak the same language. And where we have the ability to get rejected on a dozen different communication platforms. Ouch.

Still, we are believers in love and romance. When I worked with couples as a Domestic Violence Victim Advocate and Planned Parenthood Certified Responsible Sexuality Educator, I fielded so many questions like "how do I know they like me?" or "how do I know if it's serious?" I even got "how do I know if it's a date" which really made me feel old, because apparently people just hang out now, and don't actually date. But anyway, when my "perfect world" wish for direct and honest communication happens, this won't be a problem. But for now, let me see what I can do to help you figure out if your partner won't take things to the next level. No sense in wasting your time, right?

Someone who isn't interested in a next-level romance will try to avoid weaving you into their family so that they never have to un-weave you. One of the ways this can happen is by keeping their love life and the rest of their life totally separate. That means no introducing you to their family, friends, or co-workers. It's less complicated that way.

2. They've Flat Out Told You

A lot of times, people communicate their intentions very clearly, but their partners don't want to hear it. If your partner says things like "I don't do relationships" or "I'm not the marrying type" or "I don't like labels, it is what it is" then they're telling you that what you have is all they're interested in. Don't expect to change them.

3. They Mostly Just Want To Hook Up

If you never go on dates, never have deep conversations, never get into really emotional territory, and never really hang out much outside of the bedroom, you're probably a hook up or a friend with benefits. If they always find a way to get out of concrete plans, or turn them into sex, that might be your answer.

4. They Never Talk About The Future

People in relationships talk about the future. It might be as simple as making plans a month in advance, or as complex as "what would we name our children?" But it happens. If your partner never talks about the future, never plans with you, never dreams with you, and never includes you, then you might not be a part of their future.

5. They Have Big Plans That Never Seem To Include You

Are they always talking about their goals, like where they want to live, where they're going to school, what career they're after — but those goals have no room in them for another person? If your partner says "Yeah, next year when I move to New York..." and doesn't ever consider you going with them, then their goals also don't include you.

6. They're Still Talking About Their Exes

Exes. Ugh. If you casually mention your exes in conversation every once in awhile, that's totally normal. But if your partner seems stuck on their ex, they're not ready to move on to the next level with you, no matter what else they've said or done. They're likely dragging their feet with you because part of their heart is somewhere else.

When someone's not in a relationship mindset, they live their life in a very self-centered way. That means they don't compromise, they don't do things they don't want to do, and they have no problem saying "OK, I'll catch you later then" when something comes up that you hope they'll want to attend with you but that they're not interested in.

8. They Don't Stick Around For The Hard Stuff

A partner who doesn't want to take your relationship to the next level will dip when things get real. They're not going to go with you to your grandpa's funeral. They're going to leave when things get tense or uncomfortable in your relationship so they won't fight with you. They're not invested in your family drama. They don't want to know if you have a sudden money problem. They're just around for the good parts.

9. They Always Dodge The Questions

If you ever say "what are we?" or "where is this relationship going?" and you just get a lot of double talk, excuses, or avoidance, then your partner probably hasn't, or doesn't want to, consider a future with you. If they refuse to get real and acknowledge that you need some clear communication about your future, then there's your answer.

Public displays of affection aren't for everyone, but even the couples who don't make out in the street can still hold hands, casually touch each other in a loving way, and give each other loving glances. You can tell they're together. But if your partner never acts like a couple in public, it could be because you're only a hook up, and they don't want to get busted.

If your partner doesn't remember your birthday, never texts you first, never makes plans, and doesn't put that much effort into your relationship, it's probably not a priority to them. If you're doing all the work, then you're probably the only one interested in getting to the next level.

You need to be clear with your partner, voice your expectations, and ask for some kind of feedback, otherwise you're better off just moving on instead of spinning your wheels.