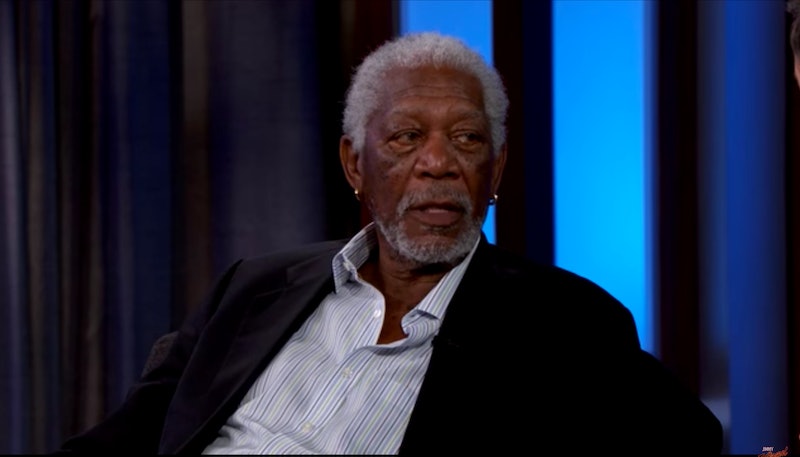 Do you ever get the feeling that you might be in The Truman Show? Your other half keeps plugging products in the middle of your conversations, none of your friends will let you talk to that mysterious stranger, and you can't for the life of you get beyond the boundaries of your town? Nope, you're not going nuts. Your life is probably just being narrated by Morgan Freeman. Freeman narrated a stranger's life on Jimmy Kimmel Live! during an appearance on Thursday August 4, because the host somehow knew that we would all love to have The Man With The Voice invest one random Hollywood-based stranger's life with meaning via his cinematic level narration.

The cameras fix on one hapless dude on the street who thinks he's just minding his business. But he's not. He's the focus for thousands of eyes around the globe as he does basic daily-activity type stuff: walking down a street, eating something while walking. You know, your basic hurried lunchtime style-activity. Freeman narrows in like a hunter on his prey: "When I first saw the bald man, shirt buttoned all the way to the top, I didn't think too much of him. But then he took a bite of something. There he was chewing something."

Chewing and crossing, we've all been there. Which means, theoretically, that any one of us could be next. So if you thought that The Truman Show was lost in the mists of time, never to return from the halcyon days of 1998, you were wrong. Almost two decades later, Freeman's delicious skill at narration means no one of us is safe from having our most mundane experiences — b*tching about our boyfriend to our mother on the phone at the bus stop; wandering around New York trying to catch 'em all; walking to one corner and then realizing thanks to Google Maps you're heading in the wrong direction and doing an embarrassing 180, hoping and praying no one was watching you — captured on camera.

Oh, Morgan Freeman. With great power comes great responsibility. Please use your dark arts of narration only for good. I'd hate to be caught out like that passerby was. This isn't even the first time the actor has played this trick for Jimmy Kimmel. This happened on March 3:

"Perfect selfie Paul, that's what we called him... looking for that perfect selfie." If there is a benevolent power above, please preserve us from being caught on live camera being totally ourselves. Don't let our carefully curated Internet presence be destroyed for the sake of one minute of laughs on Jimmy Kimmel Live! So whatever you do, don't do anything embarrassing, ever. Freeman could be watching — and narrating.