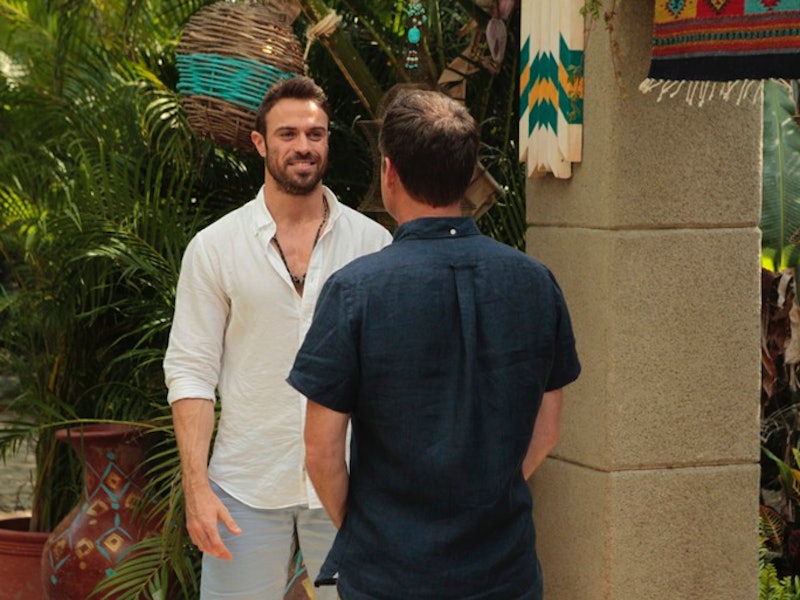 I'll admit that there were times I found Chad Johnson's antics on The Bachelorette to be somewhat amusing. His love of milk and deli meat products certainly kept things interesting from week to week. However, having now seen Chad on Bachelor in Paradise Season 3, it's clear he's starting to take this villainous persona one step too far. Between his threats of violence and the amount of offensive and hurtful remarks that spewed out of his mouth at any given moment, it's no wonder why he was voted off the island, in a manner of speaking. And while next Tuesday's promo indicates that he'll return (hopefully just briefly), I think it's clear that Chad shouldn't be in future seasons of Bachelor in Paradise .

Look, this show is all about lowering your inhibitions and having some fun, but for Chad, that seemed to mean losing control and, apparently, respect for others. He may bring a heightened sense of drama for viewers, but I don't think it's really worth the trouble. Chad isn't acting like just a bad boy — he's acting violent and that's something we, as fans, really don't need to see or encourage. The hosts of Bustle's Bachelor Nation podcast, Will You Accept This Podcast? also have some thoughts on Chad's unacceptable behavior, whether Lace has really changed, and more, which you can check out below.

Chad clearly has a difficult time interacting with others. At first I wasn't sure if it was just JoJo's particular batch of guys that Chad just couldn't gel with. But after the BiP premiere, it became obvious that this was not the case. Chad is his own worst enemy and sabotaged any relationships he could've had on this show right from the start. I mean, the way he spoke to Lace and Sarah was unacceptable, and despite his constant laughter, I found none of it to be humorous.

Now, to his credit, Chad has since issued an apology for his behavior, specifically his comments to Sarah, and while that's certainly a step in the right direction, I still don't think it excuses anything or makes it OK for him to come back on the show in Season 4, 5, or beyond. The damage has been done and I think it'd be best for everyone (including Chad) if he stayed off camera for a while.

More like this
Kylie Jenner Roasts Kendall For Her Cucumber Cutting Skills On TikTok
By Jake Viswanath
Twitter Has Very Mixed Feelings About The New 'American Idol' Winner
By Jake Viswanath
What’s New On Netflix: 'Stranger Things' & 'Somebody Feed Phil' Return
By Arya Roshanian
Kourtney Kardashian & Travis Barker’s Italian Wedding Photos Are Finally Here
By Grace Wehniainen
Get Even More From Bustle — Sign Up For The Newsletter