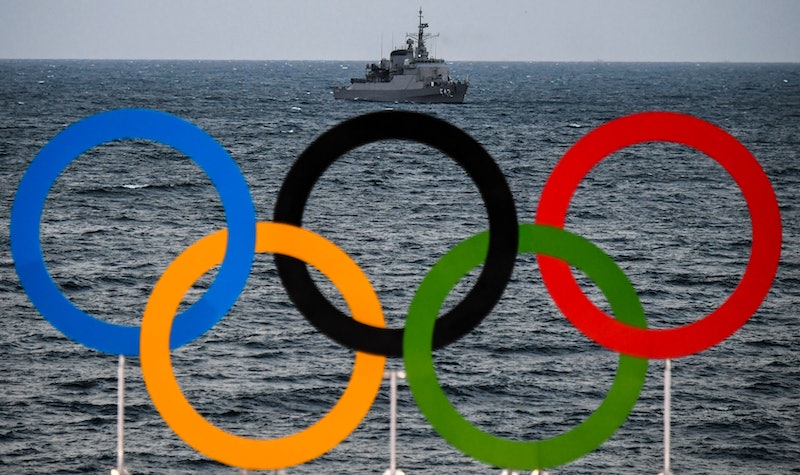 If you don't have cable, watching the Olympics becomes something of an Olympic sport in and of itself. In previous years, your options were limited either to taking up residence at a sports bar or catching what you can at a friend's house, but this year, things have changed. In addition to streaming events online, there are ways to follow the Olympics on Snapchat — you know, in case you needed a reminder that the ephemeral app is taking over the world.

Considering how young many Olympians are — the U.S. women's gymnastics team includes three teenagers — it's no surprise that a number of athletes have been documenting the events leading up to the games on Snapchat. They've posted airplane singalongs, made fun of each other's sartorial choices, and even dyed their hair light blue for an audience of thousands. (Never change, Ryan Lochte.) These backstage glimpses are enough to make anyone excited for the games, but Snapchat is going through official channels as well. In an unprecedented deal earlier this year, NBC announced they would share highlights of the Olympics on Snapchat, marking the first time the company has agreed to distribute video of the games through another platform.

It's not quite the same as watching the games themselves, but if even your BFF is getting tired of your presence on their couch, it's close enough. Here are four ways to celebrate the Olympics through Snapchat.

The most important part of NBC's official Snapchat action is a Discover channel dedicated to the 2016 Olympics. Appropriately titled "Rio Olympics," the channel combines short clips of the games with behind-the-scenes footage and information. (Like all Discover stories, you swipe up to read more.) So far, it's included short articles, introductions to different teams, and appearances by the First Family.

Snapchat has rolled out Live Stories for major events in the past, and the Rio Olympics are no different. Unlike the Discover channel, Rio 2016 Live is nothing but video; the footage is curated from NBC, Olympic athletes, and locals who are attending the games. You can find Rio's Live Story underneath your recent updates, above the rest of the stories you follow.

Like I pointed out above, plenty of athletes are on Snapchat: gymnast Gabby Douglas, tennis player Serena Williams, diver Sam Dorman, and more. (You can find a list of the most entertaining athletes to follow on Snapchat here.) It's also worth noting that many teams, including the women's gymnastics team, have their own accounts as well.

OK, this doesn't really help you watch the Olympics, but it'll definitely help you get into the spirit of things. In honor of the games, Snapchat has created a number of new lenses, filters, and stickers to make it feel like you're part of the Olympics, even if you're on the other side of the world.

More like this
Why Can’t I Go Live On Instagram?
By Emma Carey
How To Add Music To An Instagram Post
By Emma Carey
8 TikTok Pasta Recipes To Try Out At Home
By Emma Garza
How To Use The Crying Filter On Snapchat, TikTok, Instagram & More
By Emma Carey
Get Even More From Bustle — Sign Up For The Newsletter