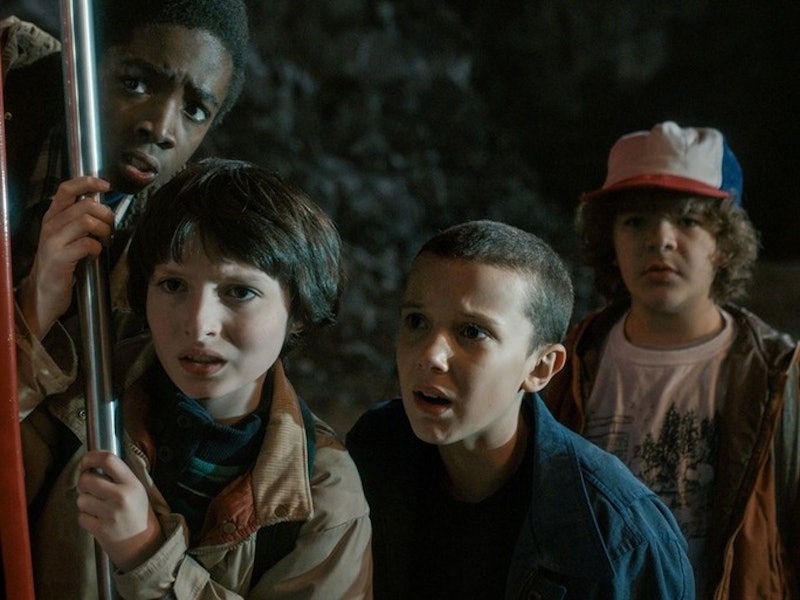 If you're not watching Stranger Things, what are you doing? If you are, you know that it's one of the greatest shows of the year, a spooky, thrilling mystery that evokes Stephen King, Steven Spielberg, and the movies of the 1980s following innocent kids that are trying to figure out a mystery à la E.T. and The Goonies. While Winona Ryder shines as Joyce Byers in the Netflix series that has been met with crazy critical acclaim, it's really the band of kids that make the show as wonderful as it is: Lucas, Mike, Dustin, Will, and of course Eleven (El). And in real life, the young Stranger Things actors who play best friends on the show are just as close, which is delightful.

Stranger Things is about friendship first and aliens second (or maybe they're tied), and Finn Wolfhard (Will Byers), Gaten Mazzarato (Dustin), Millie Brown (Eleven), Caleb McLaughlin (Lucas), and Noah Schnapp (Mike) formed a bond on set that comes through in the Netflix show. From their photos from behind the scenes, it's no wonder that their friendships were so believable and heartwarming in every single episode. Check out these adorable photos of the best friends behind the scenes of Stranger Things, to tide you over until we find out about Season 2.

This Heartwarming Montage From Eleven

She obviously learned how to evoke nostalgia from her time on the show.

I Want To Hug All These Babies!

:') Go on, get to adventuring. And eat a good breakfast.

The world of Stranger Things only has walkie talkies and radio equipment. It probably would have been easier to find Will Byers with a smartphone, but much less suspenseful. I'm grateful this cast has them to 'gram, though!

Not how many times Mazzarato says the word love in this caption, it's not even enough.

I Want To Be A Part Of This Family

I make a great Eggo waffle.

I can't handle how small that tie is.

Two Families In One

In which Mazzarato introduces his Stranger Things family to his real life family.

Lunch Is So Exciting

I agree with this level of stoked for lunch.

To when an adorable friendship was born.

The Family That Eats Together...

They Love To Eat

Also, one of the only pictures where Mazzarato isn't mega-thrilled. Maybe he is really ready for some snacks.

That's not on Netflix.

This Group Hug Wrecks Me

Excuse me, while I'm off sobbing until we find out the fate of Season 2.

More like this
One Of The UK’s Most Streamed Songs In 2022 Is A Surprise Hit
By Sam Ramsden
Here Are All 703 Outfits Rachel Wore On Friends
By Kat George
These 'Criminal Minds' Throwback Photos Show The Cast’s 17-Year Evolution
By Grace Wehniainen
The First Trailer For 'That '90s Show' Includes So Many Nods To The Original Series
By Jack Irvin, Alyssa Lapid and Grace Wehniainen
Get Even More From Bustle — Sign Up For The Newsletter