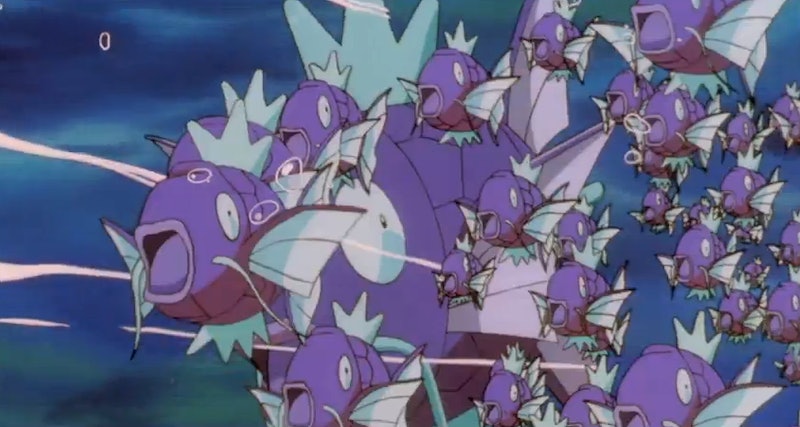 Ah, Magikarp. It feels like the huge flopping mess of the Pokémon franchise, but everyone knows that there's hidden power in those tiny aquatic disaster. Yes, it's common knowledge that Magikarp evolves in Gyarados, an enviable addition to anyone's "Pokemon Go" Pokedex... but one not so easily acquired. You know that, to catch 'em all, you usually have to catch a lot of the same critters in a row. With that, it must be scary to ask how many candies it takes to evolve Magikarp. Much like in the original Pokémon game, the task is an uphill battle of Weedle versus Mewtwo proportions.

This is the deal, fam: you need 400 Magikarp candies to get a Gyarados. Yeah. That means you'd have to go out and catch at least 100 of those floppy suckers in order to evolve it to the sea dragon. This may be the only time in history where a trainer would be palpably excited to come across a Magikarp. Likewise, it may about be a blessing to hatch a Magikarp (they're typically found in two km eggs) as typically come with multiple candies. However, it's hard to be so patient (or how to get lucky with a ton of Magikarp eggs).

Of course, only certain Pokémon are native to the area, and maybe you don't live in a Magikarp-rich town. If such is the case, maybe you can swing by the nearest river or lake, where water types are expected to spawn. Likewise, rain storms always bring Magikarps out... of course you'd have to be game for Pokémon hunting with your umbrella. OK, by now you probably feel exhausted just by examining your possibilities. There has to be a way to side-step evolving Magikarp and getting a Gyarados naturally, right?

Look, it can be done, but it's unlikely. Unlike it's weaker baby form, Gyarados cannot, I repeat, cannot be hatched from an egg, not even the prestigious 10 km ones. They can, however, be found in the wild. Like I said, certain types of Pokémon stick to certain areas, and since Gyarados is a water Pokémon, it's been sighted at beach areas. But, before you pack up your towel and sunscreen, let me be clear: your chances of finding the sea monster is still slim at best.

The truth is, there really isn't any easy way to get a Gyarados... the whole premise of the Magikarp-to-Gyarados evolution shows that even the lamest fish in the sea can grow up to be a horrible monster capable of mass destruction. Dark. But, sincerely, it's all about working hard to push yourself, making that journey. If you just keep at it, I'm sure you'll get your Gyarados, and that extra effort will be worth the wait.