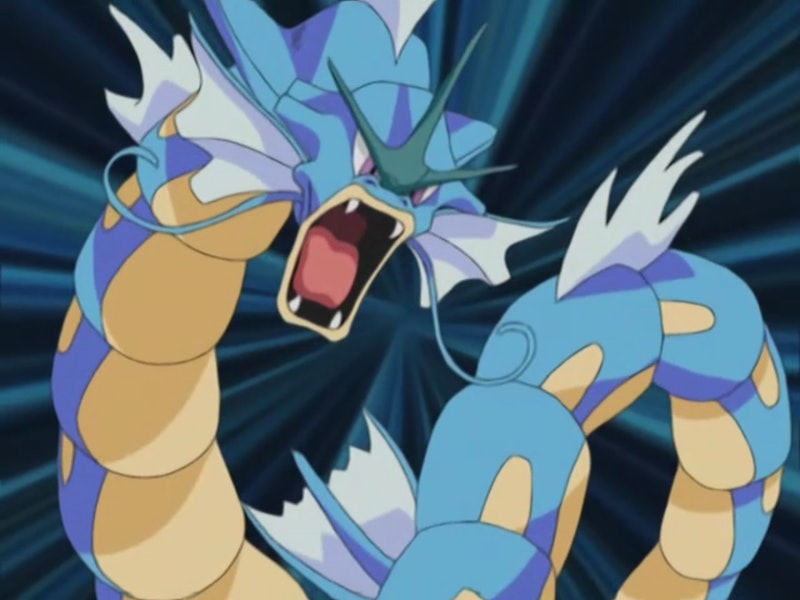 It looks like my year is going to revolve around trying to get my Pokedex to respect me and my Pokemon. With so many to catch, it's honestly mind-melting that someone has already caught all 142 Pokemon available in the United States. I'm still trying to figure out if you can catch Gyarados in "Pokemon Go," or if I'm going to have to go on elaborate PokeHunt after work this week. Someday I hope to be a Pokemon Master, but for now I'm content with answering one "Pokemon Go" question at a time.

Gyarados is a badass Pokemon to have on your roster. My favorite thing about it is that it's an evolved version of Magikarp, a Pokemon now notoriously used for Karping — aka, rubbing a win into a Gym Leader's face after demolishing their reign by putting a low level Magikarp in to defend it. And while a lot of people might throw these little guys out onto the street without a second thought, others have found that evolving them into Gyarados has an incredible result. This powerful Pokemon is not only a great addition to the Pokedex, it's a powerful rare creature that doesn't come about every day. So if you don't have the patience to catch 100 Magikarp and then evolve it, is there a way to catch one in the wild?

Turns out that just like wild Charizards, Gyarados can be caught in the wild. You just really have to work for it! In the video below, a player employed several tactics to get the end result. First, using the tracking system within the game the player narrowed down the search area in question. Walking around, he/she deployed an incense bomb to attract Pokemon towards their location. Skip to the four minute mark to watch this in action:

Obviously other Pokemon came out of the woodwork due to the attractive smells of the incense, but after a few false alarms, the elusive Gyarados appeared. This means you too can have one in your Pokeballs devoted to catching this dope-ass Pokemon. People on Twitter have been seeking and catching them all around.

If you are just starting out in the game, you might have better luck with low level wild Gyarados, or ones that are sleeping, since these guys are usually pretty tough to beat if you are level 10 and below. If you are the kind of player that likes to take things slow and steady then your best bet is to situate yourself near a Magikarp breeding ground and go to town (for you reference, here are some excellent "Pokemon Go" maps to find where they're at near you). After you grab a hundred of these little fellas, you can evolve your top prized Magikarp into a powerful Gyarados. If luck has it, you might even get a chance to see an elusive Red Gyarados ... keep your fingers crossed!