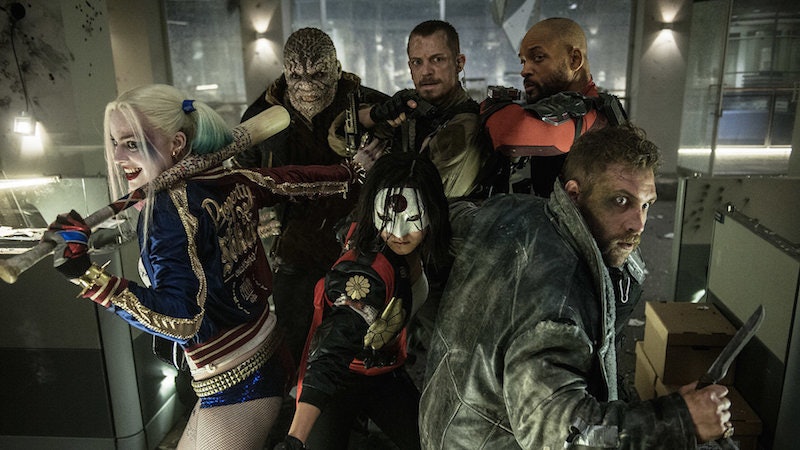 If you watch movies the way that I watch movies, then you've probably already noticed that the Suicide Squad has the most diverse cast of any superhero movie that's exploded onto the scene since Christopher Nolan's The Dark Knight trilogy. We have Will Smith as Deadshot, Karen Fukuhara as Katana, Adam Beach as Slipknot, Viola Davis as Amanda Waller, Jay Hernandez as Diablo, and Adewale Akinnuoye-Agbaje as Killer Croc — all of whom, at six, outnumber the white actors in the main cast, even if you count Jared Leto's Joker as one of them. Having people of color overly represented in a cast as opposed to being outnumbered sometimes two to one is unusual, and the Suicide Squad should be celebrated for that alone. However, the movie is also a good example of the fact that representation doesn't matter as much as how you use it.

Of all of the characters of color I've just named, only Deadshot and Diablo can reasonably be said to have any sort of depth or development. Spoilers ahead. But the former stands alone when you consider the fact that the latter dies at the end of the film. And that's not the only issue. Slipknot, played by a Native Canadian actor, becomes the first member of the team to die, a sacrificial lamb to show that Waller isn't kidding about the exploding chips in their heads. The fact that he was goaded into trying the escape that led to his death by the white Captain Boomerang (Jai Courtney), who takes Slipknot's death as the warning he needs to avoid the same fate, left a bad taste in my mouth.

Katana received all of her development in the flashback that introduced her; she's a moral warrior whose husband's soul is in her sword. That's about as much as is shared with viewers. I thought she would get more conversations, and more depth, when she actually joined the rest of the team in walking off the mission once they found out the real objective — despite being the only one of them who volunteered to be there. But, not only did she hardly speak during the entire sequence when the villains bonded in the bar, but she rejoined the mission when everyone else did without any personal reason as to why. I guess she had nothing better to than go where the plot asked her to go. Even her actress, Fukuhara, wants more development for her character in the next film, which she shared in a 2016 interview with Comicbook.com,

"I'd like to explore where she's from, what kind of training she comes from — if she gets a stand-alone movie that would be awesome! There's so much story from the point of her husband's death to her story leading up to Suicide Squad — that's something that I'd love to show on the screen."

Killer Croc would ordinarily not count in my estimation of the diversity of the cast because, despite being played by a black actor, he's wearing so much makeup for his reptilian appearance that you would never know if you had never seen a picture of Akinnuoye-Agbaje. But the film turns him into a caricature to make sure the audience doesn't miss his inherent blackness. Killer Croc refers to Harley Quinn as "shawty," and, when asked if he wanted any reimbursement for a mission well done, his only request was... to have BET in his room. Next to Deadshot's request to see his daughter and Harley's request for an espresso machine, the fact that Killer Croc wanted television wouldn't have been at all egregious if he hadn't specified that it was BET he wanted. Not even television. Just BET.

In addition, the only main villain of the film to actually die was played by Alain Chanoine; originally a black businessman just trying to navigate the subway, he was possessed by the spirit of Enchantress' brother, Incubus. But while June Moone, played by the white Cara Delevingne, was saved from her demon at the end of the film and ultimately survived, Incubus and the nameless black businessman he inhabited were blown up at the climax, and no one lost a wink of sleep over it.

I'll issue a strike for the fact that, despite recruiting and leading the team, Amanda Waller receives no character development or emotional depth at all — especially when compared to her second-in-command, the white Rick Flag. Another strike for the fact that the only black soldier in the captured Team Bravo visibly became the first to die when Incubus turned him into a mindless soldier in his army. And a third strike for the fact that Diablo's death leaves us with four characters of color in the main cast, now outnumbered by the five white characters who all survived the film. Suddenly, it seems like the Suicide Squad's diverse cast seems revolutionary only in theory.

However, there is a silver lining to all of this. The whole issue with representation is that, when you only have one character of color in an entire work, the burden falls on them to represent their entire minority group. As a black woman, I would be placed in a catch-22 where I would want to identify with the only character who looked like me, but, if they were poorly written, I would be out of options. Suicide Squad gives me Deadshot, Waller, and, technically, Killer Croc and Incubus; the film gives me options if I want to see myself in a character that looks like me, instead of having to see myself only in white characters by default, who act how I'd like to act if I were a crazy villain. (Hi, Harley Quinn.) If I'm disappointed by the portrayal of one character, I can look to another and another in the hopes of finding someone I do like, who looks like me.

More like this
'Gentleman Jack’s Cast & Crew Are Keen On Season 3, Too
By Frances Stewart
Everything To Know About Marvel’s 'Thor: Love And Thunder'
By Grace Wehniainen
The 'Hocus Pocus' Sequel Finally Has A Release Date & It Makes Total Sense
By Shannon Barbour and Radhika Menon
What Does Doctor Strange’s Third Eye Mean?
By Arya Roshanian
Get Even More From Bustle — Sign Up For The Newsletter