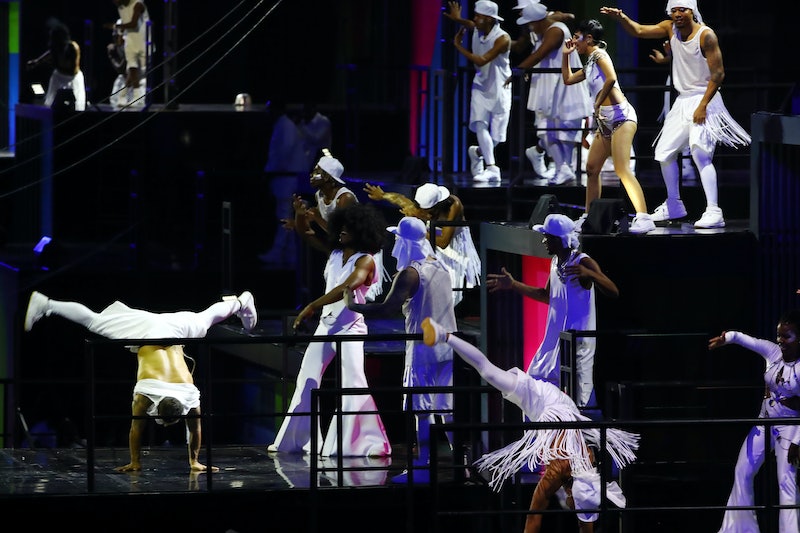 The 2016 Olympics are off to an exciting start, with an opening ceremony featuring Gisele Bundchen, impressive effects, and music from many singers and bands. And while many American viewers might not know who the rappers are from the Rio opening ceremony, after watching their performance, you'll definitely want to keep an eye out for their music and get to know their work.

The rappers at the Rio opening ceremony are Karol Conka and MC Soffia, and they both provide some great entertainment during the start of the Olympics. Karol Conka is a seriously famous Brazilian rapper who's released one album and several singles, and she's so popular in Brazil that some compare her to Beyonce, especially because of how many strides she's made for women in rap. MC Soffia, real name Soffia Correia, meanwhile, is just 12 years old, but she's already taking the world by storm. At the opening ceremony, she performed a hip-hop song she wrote herself, according to The Daily Mail, and she's gained popularity around Brazil due to her songs about racism and sexism. She told The Daily Mail that she was "feeling really anxious, and just a little calm" before performing in Rio, but that she was also excited to take the stage. Said Soffia, "I know that when my moment comes I'm going to be really, really, really nervous. But I think everything will be OK."

As anyone who's watching Soffia and Conka at the Olympics can see, their performances are certainly turning out just fine. Make sure to check out the work of both rappers, and you'll see right away why they made perfect choices for the Rio opening ceremony.

More like this
Jake Daniels Just Became The UK’s First Active Football Player To Come Out As Gay Since 1990
By Sam Ramsden
What Is Jeanie Buss' Net Worth? The Lakers President Is Uber Rich
By Hugh McIntyre
Taylor Swift Knew Hayley Kiyoko & Becca Tilley Were Dating 4 Years Ago
By Grace Wehniainen
Mick Jagger Calls Harry Styles A "Superficial Resemblance" To His Younger Self
By Jake Viswanath
Get Even More From Bustle — Sign Up For The Newsletter