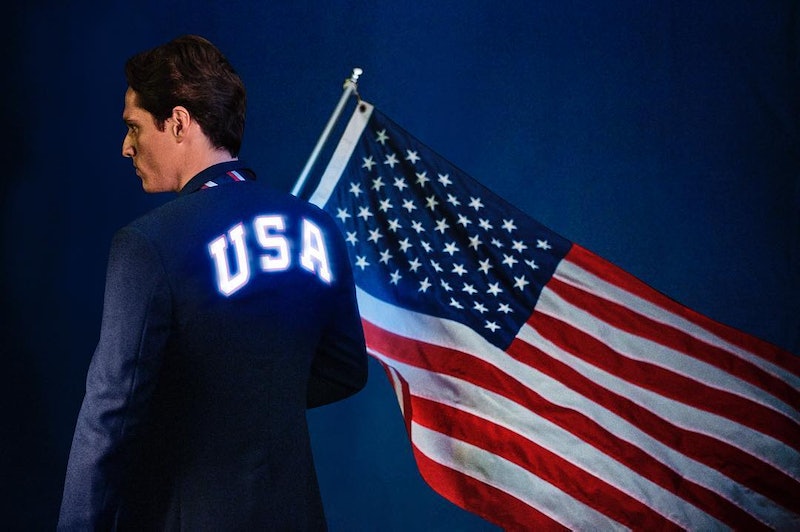 The 2016 Rio Olympics kick off today, August 5th, and while we're all totally stoked for the games to actually begin, there's something else that deserves a little bit of our attention first, because the Team USA Rio opening ceremony uniforms are the most eye-catching they've ever been. Seriously, wait until you see this.

We got a look at the all-American closing ceremony uniforms, designed by Ralph Lauren, a while back, but they've managed to keep the opening ceremony uniforms under wraps for far longer. But as you can imagine, it was totally worth the wait, because these uniforms are seriously great.

The Team USA opening ceremony uniforms were also designed by Ralph Lauren, and at first inspection, they seem like that classic, preppy vibe we have come to expect from the designer, but this year, there's a little something something extra. The team is wearing a navy blue blazer with a striped shirt and white pants, which is a little more chic and polished than the casual closing ceremony uniforms, but the best part is totally the flag bearer's uniform. Every blazer has "USA" on the back, but the flag bearer's lights up. Talk about catching everyones attention there.

So nothing too out of the ordinary there — classic, chic, and polished. But wait until you see the back:

Totally ground-breaking, and a seriously influential way to kick off the games. So not only is Team USA going to kill it in their events, but they have the style game on lock.

The tennis team in formation.

Heart-eyed emojis all around.

Get that gold, girls.

All set to dominate!

You're never too old to play dress up.

Even though they won't be attending the ceremony, they're still rocking the uniforms.

A million cool points for the silly faces.

Even her nail polish is repping 'merica!

All set to slay.

Could she be any cuter?!

Fact: The uniforms look even better with a Snapchat filter.

So excited and they can't hide it.

She's as stoked about this jacket as we are.

The more I see this shirt, the more I want to own it.

Ready for the ceremony!

Watch out, world. They're comin' for ya!

These are some seriously good looking dudes right here.