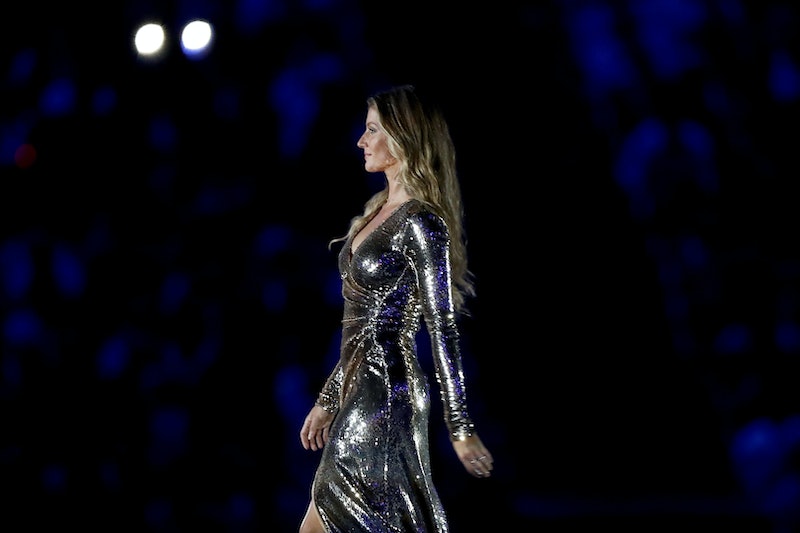 And there, just like that, Gisele Bündchen's much-hyped 2016 Olympics Opening Ceremony performance has come and gone. But, wait — where was the actual performance? That might be the question some viewers are asking themselves after seeing Bündchen's appearance during the ceremony, which, literally, consisted of her walking down the stage as if it were an extra-long runway. I know Bündchen told PEOPLE prior to the event that she would be walking down "for sure the longest runway I have ever walked in my life and by far with the most amount of people watching," but I didn't think she meant literally! Of course, if you've been following pre-Olympics coverage, you might have heard the rumors that the model's participation was supposed to include much more — so, what happened to Bündchen's Opening Ceremony performance?

Well, turns out, that was cut — and possibly for very good reason. According to The Washington Post, the skit was allegedly supposed to consist of Bündchen, "seemingly [being] robbed by a black kid from the slums." It's worth noting that the director, filmmaker Fernando Meirelles, released a statement to WaPo denying this, saying:

Meirelles... described the controversy as a “tremendous misunderstanding."

“Imagine us doing a scene like that in the opening,” he wrote in an email to The Washington Post. “I’m not that clueless.”

What actually happened, he said, was that they tested out a scene in which a food vendor on the beach rushes up to take a selfie with Gisele. Security guards don’t like it and give chase, but Gisele intervenes to protect him.

“It was a gag that was not funny so we cut it,” he said. "There was nothing that looked like a robbery in the scene except two security guards chasing after a vendor. They are three professional clowns."

The result was Bündchen's participation being her simply walking down the stage like a runway, which, I guess if you think about it, is kind of fitting considering that's what she does for a living. And either way, she looked stunning as ever.

More like this
Jake Daniels Just Became The UK’s First Active Football Player To Come Out As Gay Since 1990
By Sam Ramsden
What Is Jeanie Buss' Net Worth? The Lakers President Is Uber Rich
By Hugh McIntyre
Kaley Cuoco & Tom Pelphrey Just Made Their First Public Appearance As A Couple
By Hugh McIntyre
How Reality TV Stars Conquered Your Bookshelves
By Anna Peele
Get Even More From Bustle — Sign Up For The Newsletter