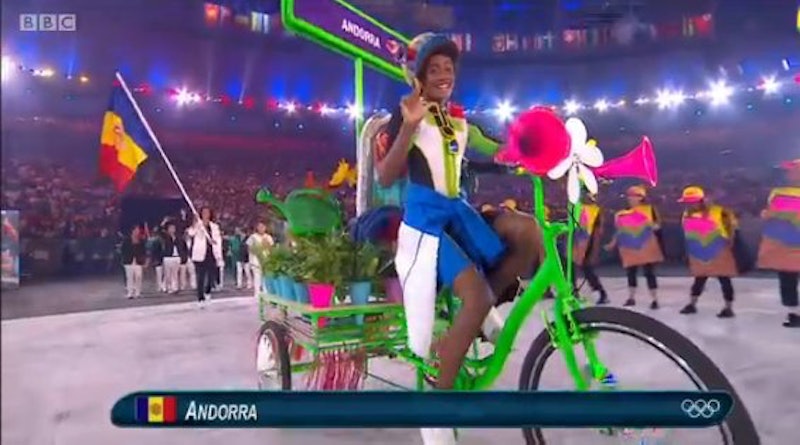 I know what you're here for, you know what you're here for, we are all united in one strong feeling during the Rio Olympics opening ceremony. Where can we get those plant bikes? As the countries' teams make their way through the parade, you may have noticed that at least one of them is on a bike that has a plant attached to it. You'd think people would want to know why — or at least stop making jokes about Willy Wonka and Dr. Seuss long enough to ask — but most people want to know where exactly these bikes will be for sale. Will the Rio Olympics' plant bikes be on eBay on Saturday? I mean, it's not like the countries will need them anymore, right? How soon can you get your hands on one of these bikes?

As far as I can tell, the bikes actually appear to be tricycles. And, as far as I can tell, the bikes also don't appear to be for sale yet. Of course, you could simply buy yourself a tricycle, like this one from Walmart for $279, and then attach a household plant to it yourself. You know, DIY your own Olympics bike just in time for the summer. But your bike would just be a cheap imitation of these amazing bikes that no one can get over.

Listen, internet. I understand your pain. I, too, wish I wasn't in my room, and was instead wheeling around the neighborhood on a brightly colored tricycle with a flower on the front and horns that look like flowers and an entire caboose that looks like I'm dragging pieces of the rainforest around with me. I mean, I don't have the lower leg strength for that kind of thing, but I want it to happen because all of these people in the parade make it look so cool. But it looks like, if you actually want to buy one of these bikes, you're either going to need to get creative or hope that Brazil decides to do us all a solid and start selling them at reasonable prices as soon as the opening ceremony is over.

Although I doubt it, because I would never sell a custom-made bike like that for a reasonable price.