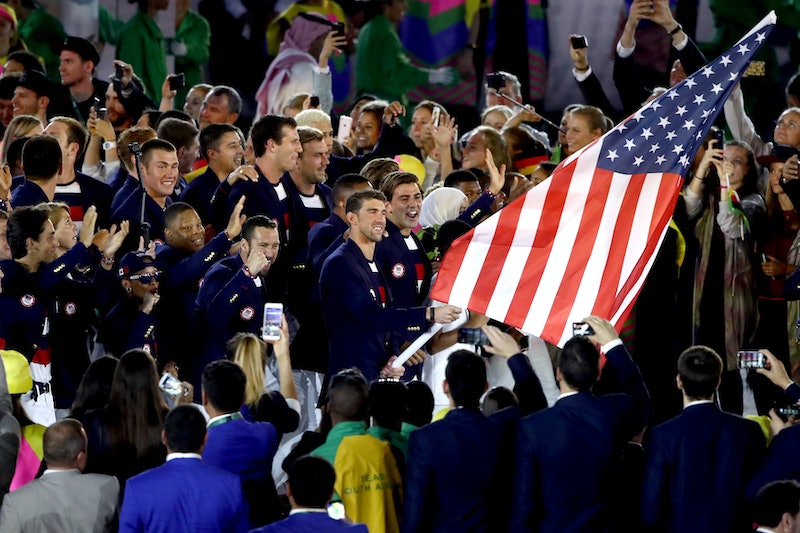 Is there anything more contagious than the various forms of national pride on display at the 2016 Summer Olympics in Rio? I think not, folks. And what could be more infectious than the Parade of Nations, a literal parade of Olympic magic? Undeniably, it is all of the spirit radiating from the individual athletes. Each Olympic competitor has spent years training for this moment. I can't fathom the amount of blood, sweat, and tears that have gone into making it not only to Rio, but to this incredibly vibrant and spirited opening ceremony. Luckily for us, many athletes have spent the last few months documenting their Olympic prep fun for us on social media. By the looks of the opening ceremony Olympic athlete selfies, they're having an absolute blast.

Maybe I'm biased but, from the looks of Instagram, some of the most exuberant athletes are those repping the grand old U. S. of A., baby. (No, seriously, I'm biased.) But, they're not the only ones getting in on all the fun, and for that I am deeply grateful. From Michael Phelps to Rickie Fowler and everyone in between, the U.S. and international athletes are not only making a statement in the opening ceremony, but also in their top-notch Olympic selfie game.

The diving wunderkind has never looked more ready for Rio than in this team selfie.

Douglas is one of the best gymnasts around. After accruing a bevy of medals in the 2012 Summer Olympics, getting her own Lifetime movie, and being turned into an empowering Barbie doll, Douglas looks so ready for Rio.

Williams has had a ridiculously great year of tennis under her belt already. Will she keep the hot streak alive in Rio? Here she is, via her Snapchat, whooping it up at the opening ceremony with German tennis player Angelique Kerber.

There's not enough room for all the amazing tennis champs coming to the Summer Games. Nadal joins Caroline Wozniacki on the opening ceremony field, celebrating their time as tennis stars and flag bearers for their home countries.

Muhammad is making headlines not only for her amazing athletic prowess, but for also making history by being the first US Olympic Athlete to wear a hijab while competing. Muhammad is set to change the way we view our athletes — for the better — and I can't wait to cheer her on.

The Olympic kayaker was able to sneak an actual selfie during the live coverage of the opening ceremony. Look at the wonder on her face!

Mirza is a ferociously talented tennis player, once praised by Serena Williams as being "a great doubles player and knows how to win Grand Slams. She was a wonderful singles player too. She can be successful with any partner."

It looks like the Olympic trio were able to snag a quick selfie after madness of the games died down a little. There's too much excitement to handle in just one photo.

The basketball powerhouse and Olympic badminton competitor took a moment to snap a sweet selfie before all the fun in Rio began.

All these selfies really make me wish that I could hang among these stars, but I guess I'll have to settle for cheering them on from the side lines. Oh, well.