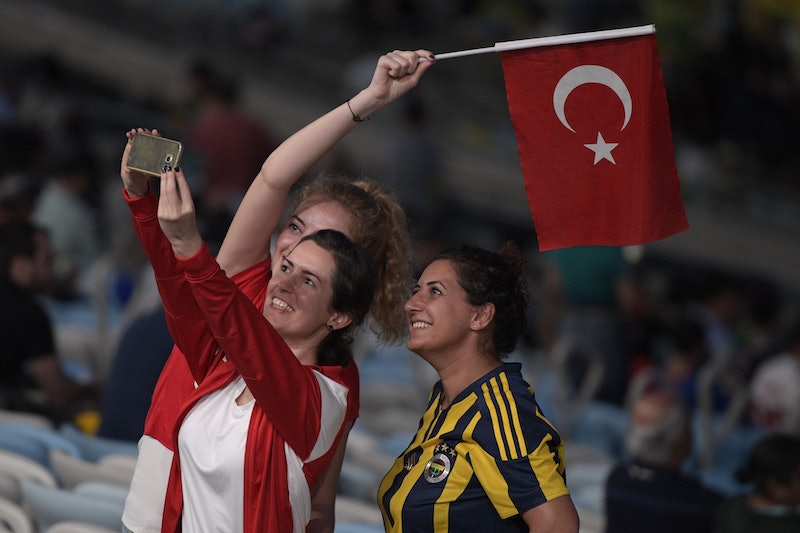 Like all Olympics, the 2016 Rio Games began with a Parade of Nations, a massive introduction of every participating country's teams featuring music, flags, and eye-catching outfits. Yet this year, something new was added to the mix that made the 2016 opening ceremony more interesting than most: selfies. Lots of them. The Rio-set event featured a huge amount of people not only capturing photos of themselves, but taking videos of the athletes and of the crowds around them. And while this was a fun sight to see, it also brought up a troubling point about how much technology has changed the ways we participate in events, as shown by the sad tweet about Rio below.

Written by Arianna Huffington as she seemingly watched the opening ceremony, the tweet calls out the way we view entertainment in 2016 — namely, by taking selfies and videos, and then having other people take photos of us doing just that. The use of technology in our everyday lives isn't inherently bad, of course, but the fact that our viewing of events, and the overall way we live our lives, has changed so drastically in just a few short years is cause for concern. If we're watching an event through a screen, with a camera glued to our hand, are we truly experiencing it? With technology playing such a massive role in all of our lives and affecting how we attend and watch events, are we no longer being truly present in our own lives?

Huffington's tweet may have a jokey feel to it, but it raises an important point. The issues that come with the rise of smartphones and selfie culture don't come with any easy answers or solutions, but that doesn't mean we shouldn't step back and think about our technology-induced choices every once in awhile. We should all be aware of how much of our lives is influenced by technology, and how many of our experiences may be altered because of things like smartphones, in order to make smart decisions about how much we want our tech to influence our lives. After all, while it's certainly fun to watch all those athletes and audience members take out their phones at the Olympics, that doesn't mean that that behavior comes without any harm. Though, it may be somewhat comforting to know that these world class athletes have the same social media additions that we do.