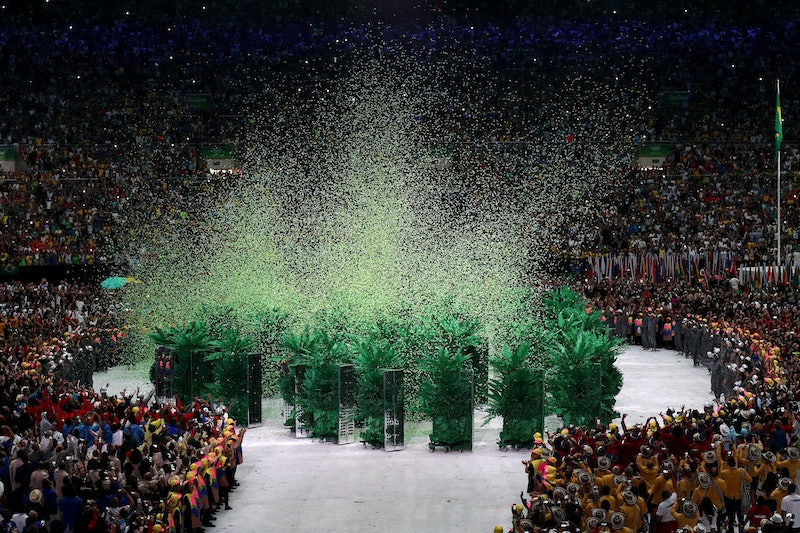 They were, by far, the hit of the 2016 Rio opening ceremony. Forget the athletes. Forget the amazing display of Brazilian culture. The most exciting part of the entire event were the big metal boxes that looked like cheese graters being escorted by small children with every single country that walked in the Parade of Nations at the 2016 opening ceremony. What they really were was a bit confusing, but it eventually became clear that these cheese graters are really big planters, carrying the seeds that each of the athletes will plant to at the end of the games in order to form an entire forest. But when a video of the dancing metal boxes at the Rio opening ceremony showed them opening up and exploding into Olympic rings, this symbol of growth and global consciousness became very very strange.

I'm not going to say what everyone else was saying when the seed boxes lined up in concentric circles and seemed to grow plants from the their tops. But let's just say it looked a lot like what kids used to doodle in the margins of their notebooks of high school. Other kids, of course, because the only weeds I knew anything about back then were the kind that you pull from flower beds.

Still, the video is kind of glorious. It was a surprising moment that came right in the middle of the Parade of Nations. Just as the audience was getting used to the faces of unbelievably talented athletes parading across our screen, the ceremony decides to switch it up with a bunch of metal boxes forming the Olympic rings.

I don't think any of were expecting that, but maybe they did that on purpose. For effect. No matter. I totally dug it. It made me want to pull out my old science notebooks and... umm... refresh my memory on... photosynthesis?

More like this
Jake Daniels Just Became The UK’s First Active Football Player To Come Out As Gay Since 1990
By Sam Ramsden
What Is Jeanie Buss' Net Worth? The Lakers President Is Uber Rich
By Hugh McIntyre
Laura Dern Said “Cultural Awareness” Made Her Rethink This 'Jurassic Park' Fact
By Grace Wehniainen
A Royal EastEnders Cameo & All The Other Platinum Jubilee Telly To Have On Your Radar
By Rachel Mantock
Get Even More From Bustle — Sign Up For The Newsletter