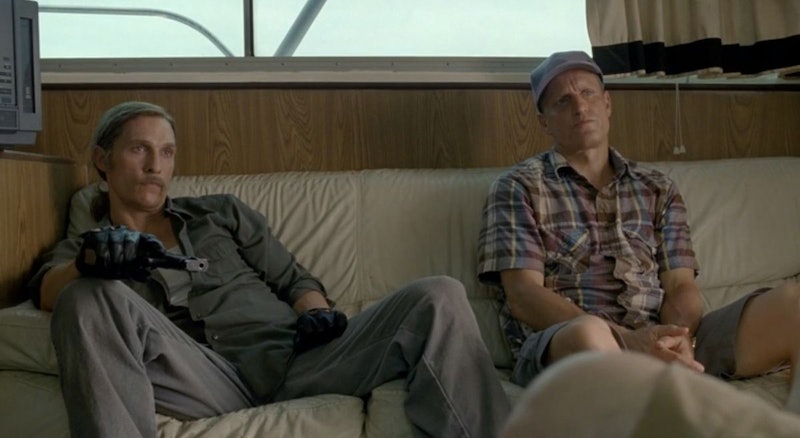 For this viewer, HBO's True Detective unfolds like a short novel. It's got the pacing of fiction, an obsession with symbolism that rivals Moby Dick, and something of the classic shape of Freytag's Pyramid. So I wasn't at all surprised to learn that its author, Nic Pizzolatto, started out as fiction writer. The writer has an MFA from the University of Arkansas, stories in the Atlantic and Ploughshares, and published both a novel and a book of short stories before turning to the art of the script.

And because I've been watching the series with an eye toward its novelistic elements, I found the True Detective finale extremely satisfying, despite the backlash circulating the Web. Sure, the Yellow King didn't rise from the dust and blast Rust and Marty into oblivion with his creepily long fingers, nor was justice served up neatly on a platter in the way Law & Order episodes have trained us to expect. Though many were disappointed with Sunday's season finale, I was moved — as though I'd just closed the cover on a short but taut book. Pizzolatto often pits the strengths of his creative writing background against the flashier, faster world of TV writing — and comes out on top.

There were five elements in Sunday's finale that particularly reminded me of a novelist's work, all of which enriched the show, but may have been infuriating to those craving the sort of wham-bam ending we've come to expect from anticipated TV finales. I believe, however, that it's important to look at what the writer is trying to do within the rules of the world he or she has created. So let's put on our reading glasses.

1. The finale is all falling action and no climax.

Cue a tiny, sad violin. There was no big reveal in the last episode! No Yellow King showed up, spattered in gore. No conspiracy theories were proven true. There were plenty of frightening moments, but nothing that truly shocked. No new information was revealed, other than the killer's name. (We already knew his identity.) In short, the conclusion was pure falling action — the climax took place at the end of episode 7.

In Freytag's Pyramid, the classic structure used to measure plot, the climax of a story is not the bloody shootout. It's simply the turning point in the plot, when things shift around and information is revealed and characters change direction. Sure, the True Detective finale has a minor turning point, which occurs when Cohle and Hart match the green paint job to the killer, Errol Childress. But let's be honest: that was one of the weaker moments of the series. (He got green paint… on his ears? Both of them?) The real climax — at least for the readers — was the ending of episode 7, when Eroll Childress turns into the light and we see his scarred face.

That is when things turn around — for us. That is the moment we put a face on something worthy of our fear.

So if the climax happens at the end of episode 7, episode 8 is all falling action and dénouement. Falling action, according to Freytag's Pyramid, is the unraveling between the protagonist and the antagonist, the agonizing period where we're not sure who will win and who will loose. Welcome to the Carcosa sequence. After the bloody fight, we get the emotional dénouement in the hospital. TV shows usually like to include the climax in the finale (see: Breaking Bad, when Walter White decides to return home one last time, cueing the falling action) — but True Detective has the arc of a novel, so the pyramid is stretched out more.

Pizzolatto has always favored gorgeous, slow, panoramic shots of Louisiana's near-surreal landscape, but the finale had even more of those than usual (including a shot of the abandoned meth lab where Cohle and Hart killed Reggie Ledoux). Not every detective show would give this much screen time to landscape when there's a Green Spaghetti Monster to uncover, but here, the shots served the same purpose as scenic passages in a novel: breaking up the action, but at the same time, maintaining tension. Just look at the scenic descriptions in The Great Gatsby right before Gatsby gets shot:

He looked up at an unfamiliar sky through frightening leaves and shivered…a new world, material without being real, where poor ghosts, breathing dreams like air, drifted fortuitously about…like that ashen, fantastic figure gliding toward him through the amorphous trees.

Compare this passage to the screenshot above, where Cohle is wandering through Carcosa, but the action breaks for a moment to give us a glimpse of the "unfamiliar sky."

Some people think that True Detective was littered with red herrings, but let's look at those herrings in more gracious terms: as non-literal foreshadowing. Pizzolatto is clearly obsessed with repeated imagery, and the finale showed us that all those symbols and shadows weren't necessarily proof of anything. They were simply atmospheric. That is, Audrey drawing creepily sexual pictures does not = Audrey getting molested by the Yellow King. And while that may not be literal enough for the conspiracy theorists, it's certainly literary.

4. Character development was prioritized over action.

Okay, so there was that agonizingly long chase through Carcosa, and the whole Rust-getting-lifted-off-the-ground-with-a-knife-in-his-stomach thing. Obviously action was given its airtime.

But the bloodbath in Carcosa wasn't the end of the show at all. The show culminated in almost 15 minutes of serious emotional development for both protagonists, which is a classic requirement of fiction: the hero cannot emerge unchanged! This is not to say that TV forgoes character development, of course. But popular finales do tend to prioritize action (again: Breaking Bad, ending on a bloody note), and lesser TV dramas like to get the characterization out of the way early so they can move on to spooks and special effects (like my personal favorite show, Pretty Little Liars, in which Spencer is presented as and never ceases to be the Type A academic stressball).

A note on character development: I read Errol's creepy British accent as a brilliant bit of characterization done in double-time. Pizzolatto only had one episode to really establish Errol's character, so he had to develop him fast and ruthlessly. It was easy to make him creepy: throw in a few broken dolls, a decomposing dad, a half-sister, and stir. But to be believable as such an atrocious, obsessive villain, Errol also had to come across as smart. I interpreted his easy adoption of a British accent as a sign of savant-like intelligence. Later, he adopts the drooling speech of his half-sister; even later, the grandiose language of religion ("little priest… take off your mask"). Like a short story writer, Pizzolatto didn't have much time to work with his character, so he needed a quick, evocative personality trait that would imply much more than it said.

5. The finale was comfortable with loose ends.

True Detective has never been one to shy away from bigger questions about good and evil, but a clean ending usually has to pick one side or the other. Unlike the ending of a Law & Order episode, in which the mystery is solved and the killer locked up, True Detective leaves us grappling with the sickening realization that its crime was only partially solved. Good limps on, but evil still lurks in the swamps. Pizzolatto's willingness to leave us hanging reminds me not of a TV finale's obsessive love of tying up loose ends, but a novelist's willingness to remain in the murkiness between light and dark a little while longer.