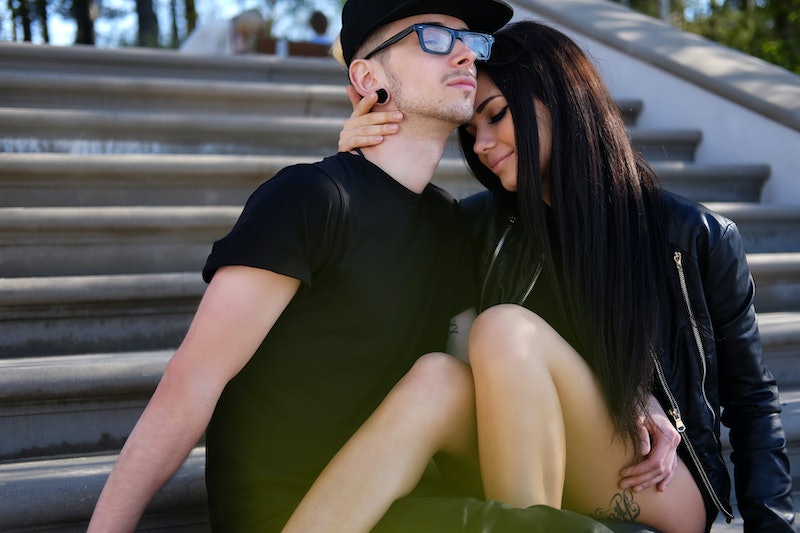 When it comes to the things that predict your relationship's success, you can probably already guess the big ones. A relationship will last when the people in it have a lot in common, communicate well, and respect each other, for example. But there are a few other correlates you might not expect, and while they're not the end-all, be-all, they do tell us some interesting things about what helps keep a relationship going.

The number-one factor that predicts a relationship's success is your ability to be yourself around your partner, Barbara Neitlich, LCSW, author of Stop Dating Like a Teenager, tells Bustle. And that includes your best self and your worst self. "It's easy to love and get along with someone when they are happy and successful," she says. "However, the relationship is often challenged when one person is struggling. If you can be your total self, regardless of the situation, and that person loves and honors you, then you can bet that there is an excellent chance that this relationship will last."

If you've found that kind of connection, you probably don't need to pay too much attention to these other factors. The ability to be whoever you are at any given moment really trumps everything else. But just for the fun of it, here are a few other things you might not realize could predict happiness, longevity, and passion within your relationship.

A recent study in the Journals of Gerontology found that couples' drinking habits could predict how happy their marriages were — but it wasn't about what these habits were as much as whether or not they were the same. If they both drank, there weren't any issues, and if they both abstained, that wasn't a problem either. The issue arose when their habits were different, and women especially were unhappy when their habits differed from their partners'. So, if you want to know if your next date has potential, you might want to observe whether they ask you to a cafe or a bar.

2. How You Split Household Duties

There was a theory going around a while back that couples with more traditional gender roles had hotter sex lives, but more recent research published in The Journal of Marriage and Family suggests it's actually the opposite: Couples who split chores more evenly have more sex. So, if you're looking to spice up your sex life, you may want to offer to help do the dishes.

3. How Much You Laugh Together (Literally)

It may seem obvious that laughing together is a sign that you get along well, but what's more surprising is that the timing of your laughter indicates how happy your relationship is. A study in Personal Relationships found that couples who laughed at the same time while they were telling a story were more likely to be satisfied with their relationships.

4. How Much Your Engagement Ring Costs

If you think a lavish engagement ring will solidify your marriage, think again: It actually works the opposite way. A study from Emory University found that people who spend over $20,000 on an engagement ring are 3.5 times more likely to get a divorce than those who spend under $10,000. This certainly doesn't mean your relationship is doomed if you or your partner splurged on a ring, but if the money was spent out of a need to overcompensate for something else that was lacking, that could be a problem.

While we all have our personal boundaries for how much we do and don't share on social media, one study in Cyberpsychology, Behavior, and Social Networking may be informative to those who are on the fence about becoming Facebook-official. People who changed their relationship statuses and posted photos of their significant others were more likely to be in a relationship six months after they were initially surveyed.

So, there you have it: Some pretty random things might provide a clue into the longevity of your relationship. But it should be noted that this doesn't necessarily mean doing these things will make your relationship stronger. They could also just be signs that the relationship is strong already. And there are plenty of other ways to know that.

So if you're not Facebook-official, bought an expensive engagement ring, and laugh at different stuff, don't sweat it. As many of us say about astrology on our OKCupid profiles, this stuff's mostly just fun to think about.