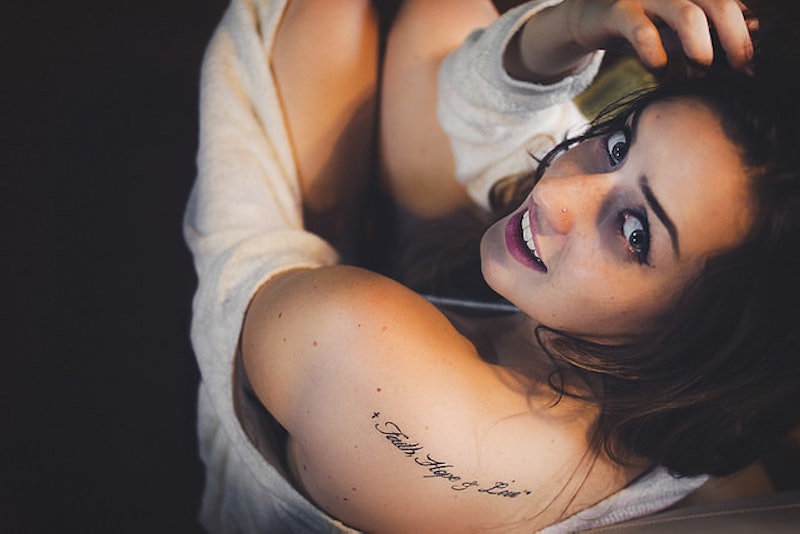 I came by it honestly: I started learning about astrology in the womb, and though I can't say I learned the best sex position for Taurses — my sign — at that time (thank god), I was born to a mother who puts a lot of stock in the zodiac. I've gone back and forth on my stance on such things, ultimately settling on the OkCupid approach to horoscopy: "It's fun to think about."

And it's fun to put into action. New app Align matches people according to signs, not swipes, and my girlfriends and I have definitely been known to read about horoscopes in relation to sex and love late into the night. If you're dating someone new, it's always fun to read about your potential love connection in relation to their zodiac sign. You can even use the stars to make sense of past relationships. Or use the heavens to make job decisions. I mean, you can take this as far as you want it to go.

One thing is for sure: Tauruses are awesome. To take that idea a step further, I tapped astrologist Mecca of My Life Created to reveal everything a Taurus needs to know when it comes to sex. Also a writer, filmmaker and transformation coach, Mecca founded her astro-coaching practice in the hope of assisting people in creating the lives they desire by helping them "better tap into their own natural-born gifts." She knows all about sex and love when it comes to the zodiac, and she's not shy about sharing her awareness: Tauruses should embrace kink, erotic massage, and Scorpios, among many other things, she says.

1. You Love To Get Sensual

"Taurus is an earth sign and ruled by Venus, which makes the sign have an affinity for very sensual pleasures," Mecca says. She stresses the importance of engaging all five senses in bed. Also: Don't rush into anything. Tauruses "tend to engage in sex that's slow to build up and includes lots of touching, kissing, etc.," she says. Light a candle, spritz on some perfume, put a spray of lilies by the bed — or just go au natural: "Scent is a big turn-on," Mecca says. "Pheromones drive any Taurus gal or man wild. It has to do with Taurus being so physical. There's something very earthy and intimate about the scent of a lover."

2. Whatever Sex Position You Choose, Bring The Kink

A blindfold or a whip never hurt any Tauruses — in bed. Since these sensuous bulls are tuned in to their senses, try eliminating one or turning the volume up on another for an instant turn-on. A blindfold snipes sight, and a whip raises the ante on one of the most powerful sensations: touch. "Since Taurus needs to have all senses engaged, try blindfolding them, then treating them to a thoughtful massage with a fragrant massage candle," Mecca suggests. "Not only will they enjoy the scent, but they'll melt under the warm, slippery wax. If they (or you) are ready to kick it up a notch, try incorporating a little flogging action after massage. Opt for a natural fabric ([try] suede or leather) flogger with strips short in length for some nice whip appeal."

3. Hook Up With A Scorpio

For hot sex, try a roll in the hay with the sign on the reverse side of the zodiac wheel: Scorpio. "The best sexual mate for Taurus is Scorpio, their opposite sign and the sex gods/goddesses of the zodiac," Mecca says. "Scorpios are water signs, and also have a fixed quality like Taurus, which means they're able to match a Taurus' need for depth, intimacy and long-term loving. Plus Scorpios have the ability to sense and intuit what a partner needs sexually, which, of course, makes a Taurus feel pampered and cherished."

She offers one caveat to Tauruses when it comes to giving new experiences a spin: "Taurus [is] a fixed earth sign (read: stuck in their ways), [and] they could use help in trying new positions/experimenting and not falling back on the same old, same old." A Scorpio might be just the ticket to teaching an ol' Taurus some new tricks.

5. Sleep With Yourself — Or Not

The Taurus-Taurus love connection is oft touted as the holy grail of romantic matches, but two bulls can get a little dicey in bed, Mecca says. "Tauruses are compatible with other Tauruses, but it would be like essentially dating/sleeping with yourself — the good and bad parts," she says. "A Taurus-Taurus relationship reminds me of Chris Brown and his ex Karrueche Tran." (LOL!) "Hot but deadly at the same time, because they're both stubborn and possessive as hell. Hell hath no fury like a Taurus temper!"

If a Scorpio (or Taurus) is nowhere in sight, never fret, Mecca says. "Other signs that tend to get along with Taurus (if we're going by sun signs alone) would be earth signs like Virgo or Capricorn, or water signs like Pisces and Cancer. Earth signs can relate to the Taurus need for physical/material comforts, while water signs bring a healthy dose of sensitivity and depth to a Taurus' sometimes steely ways."

But a double-Taurus relationship can be amazing. Called "the love connection of a lifetime," Taurus love can make for "a very sensuous and stable relationship," according to astrologists on Astrology.com. This is perfect, because sensuality and stability receive top marks among Tauruses, along with "fidelity, sharing good food and other creature comforts," say astrologists. Expect to be spoiled by your counterpart, they add: "Taurus can respect their sweetheart’s desire for life’s little luxuries, because they have that need themselves."

These astrologists echo Mecca's sentiment, but with a different spin: "All Tauruses have to learn to agree to disagree, and especially two Tauruses together; they need to recognize that their relationship is too good to jeopardize with minor arguments." Maybe that's because "no one else really gets them."