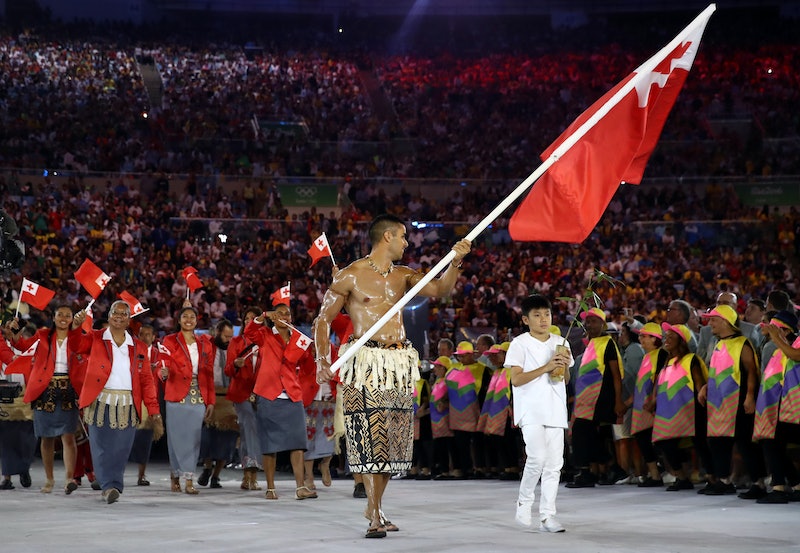 There are just some sights that you can't un-see, and there are just some moments that you'll never forget. Thus was the case when the oiled-up Tonga flag bearer came strutting through during the Rio opening ceremony's Parade of Nations, and our lives changed forever. But, honestly, it was hard to figure out who was most attention-grabbing in the moment seen 'round the internet: the flag bearer or the kid with the Tonga flag-bearer who looked so embarrassed to be there. I mean, seriously, I thought I had a strong side-eye game until this kid showed up and put my side-eye game to shame. The way he looked askance at the flag-bearer, and then wouldn't look in that direction again, was just too adorably charming for words.

I mean, I am not complaining. Nothing that involves oiled-up men on my screen is necessarily a bad thing for me. It's a great way of subverting the male gaze, anyway. But as fascinating as that flag-bearer was, he became even more fascinating thanks to the perfect reaction face of his young companion. It was a lot like a silent stand-up act, where two diametrically opposed comedians are playing off each other so expertly that you're laughing before you've even consciously decided to do so. I mean, who can argue with a shot like this?

Maybe the kid wasn't embarrassed. Maybe he was just, like, super jealous, and hoping against hope that he gets to look that buff one day in the future. Maybe he was looking at everything he wanted to be when he grew up, and turned away to think, "Maybe a little less baby oil, though." We may never know — unless someone shows the kid this clip and asks him, I guess.

But the fact of the matter is that we all had a laugh over the amazing moment, and, in that way, Tonga definitely didn't get buried among the many, many, many, many nations that we saw parade through the stadium on Friday night. And isn't that the real victory here?

More like this
Twitter Is In Utter Meltdown After 'Derry Girls’ “Poignant” Finale
By Sam Ramsden
The WAGatha Christie WhatsApp Messages Have Been Released — & They're Wild
By Sam Ramsden
Prince Harry Spoke Out About Archie & Lilibet’s Futures And What Worries Him The Most
By Sam Ramsden
Are Tom Daley & Louis Theroux Bound For 'Strictly'?
By El Hunt
Get Even More From Bustle — Sign Up For The Newsletter