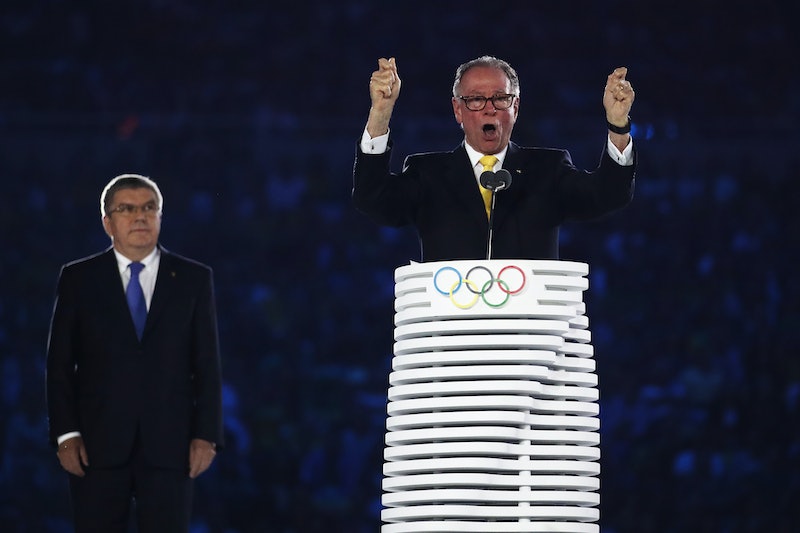 Friday night's Olympics opening ceremony was full of special moments. There was Gisele Bundchen walking across the stage like she owned it. There was Vanderlei Cordeiro de Lima lighting the Olympic cauldron. And then there was another special moment that was definitely unplanned, and that's Carlos Nuzman's Freudian slip during his speech introducing the International Olympic Committee President Thomas Bach. Specifically, Nuzman said Bach "always believed in the sex" before quickly correcting his wording to "success," which is what he meant. Unfortunately for him, the world caught on to Nuzman's slip-up. As one Sports Illustrated journalist suggested on Twitter, "That's why they hand out so many condoms in the Village."

Given the fact that the IOC is providing 450,000 condoms to the Olympic Village this year, which equates to 42 per athlete, maybe it's no surprise after all that Nuzman was thinking about sex during his speech. I mean, with all the condoms, I can see why it would be hard not to. But there's a time and a place for everything, and unfortunately, Nuzman slipped up on his wording at a crucial moment during the ceremony and in front of a few million people. No biggie. He will prevail.

Apparently, the 450,000 condoms provided to the Olympic Village aren't even all of them. There are 9 million total condoms that are being distributed throughout the entire city to promote safe sex over the course of the Olympics. And according to gold medalist and Team USA soccer player Hope Solo, those condoms are necessary because, as she told ESPN, "There's a lot of sex going on." Well, I guess that might be why Bach "always believed in the sex."

But in all seriousness, Nuzman is the president of the Brazilian Olympic Committee and has been the head of Rio's organizing committee since 2012. He is a former Olympian and competed in the 1964 summer games in Tokyo as part of Brazil's volleyball team. And on the opening night of the 2016 Rio Games, Nuzman delivered some inspiring words, noting, "The best place in the world is here and now."

Friday night marked the start of the 2016 Olympics, which will continue through Aug. 21.