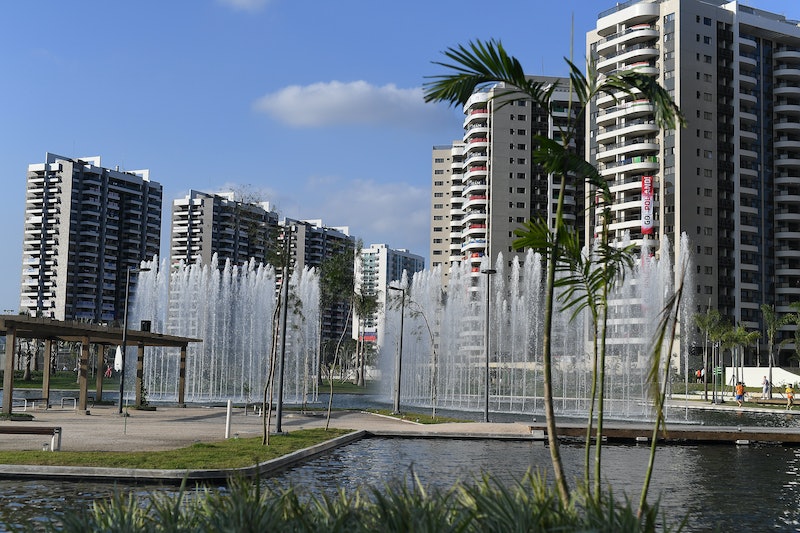 It’s no secret that, over the years, a lot more than sporting events have taken place at the Olympics. Sex ones do, too. What do we know about sex in the Olympic Village? For starters, at this year’s Olympics in Rio, 450,000 condoms are being given out. Yep, 450,000. That breaks down to 42 condoms per athlete. However, that 450,000 is only part of the nine million (!) condoms being distributed throughout Rio during the Olympics, courtesy of the Brazilian government. “This is considered sufficient to encourage athletes to practice safe sex while in Brazil for the Olympic Games,” the International Olympic Committee (IOC) told the Folha de São Paulo newspaper.

Why so much sex at the Olympics, and among the athletes in particular?

“Boxers often abstain from sex before a big fight,” Jeffrey Sumber, MA, MTS, LCPC, psychotherapist and bestselling author of Renew Your Wows! , tells Bustle. “It makes sense, right? Keep all that testosterone pent up in there until it is time to unleash the force. However, for some elite athletes, remaining the master of one’s domain is less appealing as a tool for optimal performance. Why? I believe a possibility is the cultural shift that has occurred in the past decade, largely impacted by apps, swipes, and Netflix-chilling. More and more of us see sex as a workout, not a relationship in process. So what better stress release than sex when you have the world watching and a nation depending on you?”

Putting sex aside for a second, what is the Olympic Village, anyway? It looks like a college campus or super cool condo complex where anything and everything you’d need is at your disposal — cafés, TV lounges, a 24-hour McDonald’s that gives out thousands of chicken nuggets per day in the dining hall (which happens to be the length of two football fields), nightclubs (some of which give out free drinks), etc. And the aforementioned condoms, of course.

It’s been referred to as “just a magical, fairy-tale place, like Alice in Wonderland, where everything is possible,” Carrie Sheinberg, an alpine skier at the 1994 Winter Games who has since reported for other Olympic Games, told ESPN. “You could win a gold medal and you can sleep with a really hot guy.”

1. You Can Have Safe Sex

With all the condoms I mentioned above, all nine million of them, people in Rio can rest assured they can have safe sex. Plus, not only has the Zika virus been spreading across Brazil (and cases have been identified of it spreading through sexual contact), but the country also has the largest number of people living with HIV in Latin America, representing 46 percent of new cases in 2013. It’s most prevalent in the South and Southeast of the country. Yep, Rio’s in that region.

2. The Condom Stats Have Gotten Higher Year After Year

Over the years, the number of condoms that were given out has (mostly) increased at the Olympics. Here are a few examples:

It’s getting more and more common for Tinder and Grindr to blow up at festivals like Coachella and Sundance, so Tinder usage being super popular at the Olympic Games shouldn’t come as a surprise.

You may remember Jamie Anderson, the American snowboarder who won gold in the slopestyle event in Sochi. She told Us Weekly, “Tinder in the Olympic Village is next level. It’s all athletes! In the mountain village it’s all athletes. It's hilarious. There are some cuties on there.” But it got to be too much. “There was a point where I had to be like OK, this is way too distracting,” she said. “I deleted my account to focus on the Olympics.” Whoa, big move.

Grindr too was a huge part of London in 2012. The app crashed right at the beginning of the Games.

4. The Close Quarters May Encourage People To Get “Close”

Dr. Judy Kuriansky, a sex therapist and clinical psychologist at Columbia University’s Teachers College in New York City, attended several Olympic Games, and toured the Olympic villages as well. “You see how isolated the environment is,” she told ABC News. “They are gated off and you have to have passes to get it. They eat together in large groups. That’s why you are psychologically turned to an earlier sense of camp or college. They sleep in these little bunks in suites with common areas. It lends itself to that kind of lifestyle.”

There were so many condoms found on rooftops of Olympic Village buildings during the 1988 Olympics in Seoul that outdoor sex had to be banned.

Back at the Vancouver Games in 2010, six athletes allegedly had group sex in a hot tub, reports ESPN.

7. Some Athletes Get Curfews

Some coaches try to give curfews to their athletes, prohibit alcohol, and/or don’t allow them to visit each other’s bedrooms. During the 2000 Games in Sydney, Olympic swimmer Amanda Beard was in a relationship with another swimmer. “People would walk around for miles to try to sneak somewhere,” she told ESPN. Yep, going along with the college comparison above, this reminds me of college life and people sneaking into each other’s dorms.

8. It May Make For An Awkward Morning After

Yep, the previous night’s activities may make for an awkward morning, whether you have to appear on the Today show, like Team USA’s goalkeeper, 2008 gold medalist Hope Solo, did, or see the person in question again — which brings a whole new meaning to running into an ex. Chances are good some of these athletes are bound to see each other again, right?

9. But Good News: Villagers Seem To Take A Vow Of Silence

“What happens in the village stays in the village,” Summer Sanders, a swimmer who won two gold medals, a silver, and a bronze in Barcelona, told ESPN. Sanders said that phrase is the second Olympic motto. “There’s a lot of sex going on,” said Solo. Ryan Lochte, who holds a world record for swimming, agreed. “I'd say it’s 70 percent to 75 percent of Olympians,” he said.

More like this
16 Ways To Jazz Up Your Tinder Bio This Year
By Lexi Inks
The “Rules For Dating” TikTok Trend, Explained
By Lexi Inks
15 Flirty "Thinking Of You" Texts That’ll Make Your Crush’s Day
By Lexi Inks
What Even Is A Healthy Relationship?
By Brittany Leitner
Get Even More From Bustle — Sign Up For The Newsletter