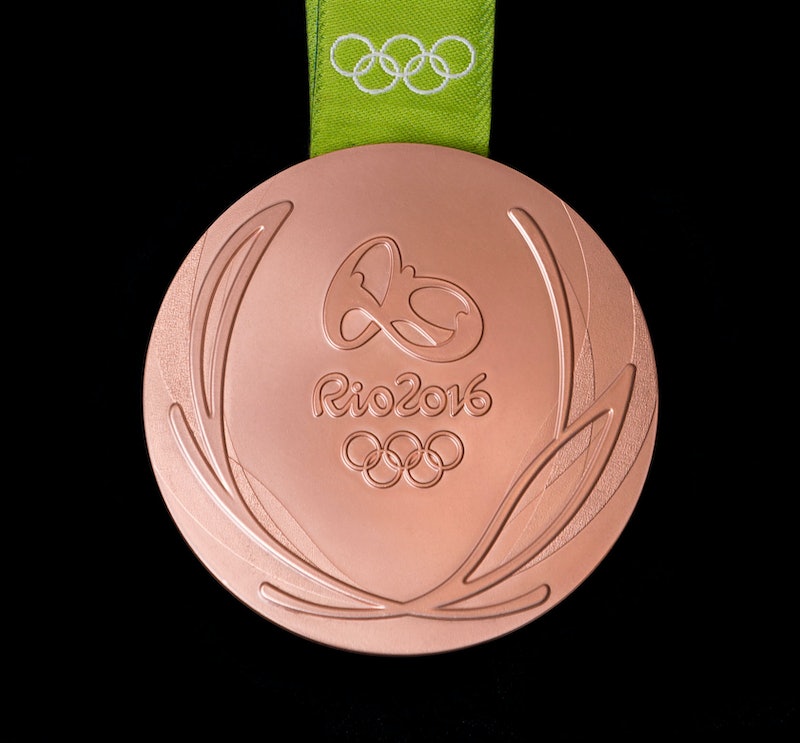 Of course, winning an Olympic medal (even one for third place) is, in some sense, a priceless experience. But how much is a bronze medal worth, really? Do you even know what bronze is? This lesser-known precious metal has an ancient past and a big presence in the modern Olympic games, even though bronze may not be technically worth as much as its better-known podium neighbors.

Bronze is an ancient alloy, or mixture of metals, these days typically containing a large percentage of copper and a smaller percentage of another metal. This high-copper content is what gives bronze its bronzy color, while an additional metal can change copper's typical properties (added tin makes it harder, for instance).

Like the silver medal (and unlike the Olympic gold medals), the Olympic bronze medal contains exactly what you'd expect it to — namely, bronze. The Brazilian mint produced bronze metals for the Rio Olympics with a high ratio of approximately 95 percent copper to 5 percent zinc (in the past, this zinc mixture might technically have fallen under the "brass" category, but by contemporary standards, it counts as bronze). Since bronze is susceptible to corrosion, those currently-shiny Olympic metals could develop a greenish patina over time, unless their winners take careful care of them.

Bronze's value might have been higher in the past when mining and processing was more difficult, but things are quite different now. Copper prices have been declining steeply recently (though they were already low), and the tiny amount of zinc in a bronze metal isn't worth much either, meaning that the "podium value" of the Rio bronze medals is sadly negligible. By my calculations (based on prices at the time of writing, via Kitco metals), the 475 grams of copper plus 25 grams of zinc in each bronze metal is worth a paltry $2.50 or so. Ouch.

If it's any consolation, medal winners at the Rio Olympics can at least feel good knowing that all the Olympic medals were produced sustainably in 2016. According to the official Olympics site, this means (among other things) that each of the 864 bronze medals contain 30 percent recycled materials, and that the attached neck ribbons were made in large part of recycled plastic bottles. And, according to the Brazilian mint, they were able to harvest raw materials for the bronze from their own industrial waste, with oversight by the 2016 Olympic committee. So while the bronze medals don't have a huge financial value, they did manage to incur a low environmental cost too.

More like this
What Is Jeanie Buss' Net Worth? The Lakers President Is Uber Rich
By Hugh McIntyre
'Doctor Strange 2' Star Benedict Cumberbatch’s Net Worth Is Not An Illusion
By Hugh McIntyre
5 Crystals To Manifest More Money
By Megan McCarty
Meet The Disney Imagineer Bringing 'Guardians Of The Galaxy' To Epcot
By Charlie Mock
Get Even More From Bustle — Sign Up For The Newsletter