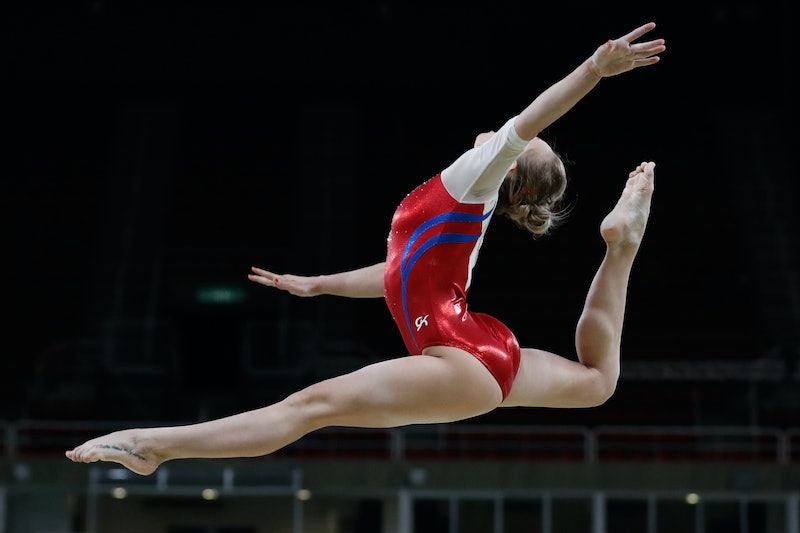 Some professional skills are a little more transferable than others, and it might not be clear what you're supposed to do after you, say, compete in the Olympics as a gymnast. As it turns out, what gymnasts do when they retire varies greatly. And it's a good thing too, because the average age of United States gymnastics teams is a tender 16 years old. When you peak so early, how are you supposed to decide what to do with the rest of your life? It seems from the outside like nothing could top that kind of competitive success, but they've got decades and decades of life and work ahead of them, and seem to be spending them happily.

It might be the case that these former Olympic competitors succeeded at their new careers and lives not in spite of having spent years focusing on gymnastics first, but because of it. Training for the Olympics has got to select for people with a high level of dedication and persistence, and then it probably boosts those positive qualities even further. Gymnastics appear to require unwavering poise and nerves of steel to compete well. Maybe many other jobs, even high-pressure ones, must seem downright easy by comparison. If you can spend 30 or more hours per week training for the Olympics from a very young age, while somehow keeping up with school and life, then I guess you can do anything.

Some retired gymnasts just won't quit! For instance, Kim Zmeskal (now Kim Zmeskal Burdette) competed in the 1992 Olympics in Barcelona before "retiring" to open a gym and gymnastics coaching practice with her husband in Texas. Teaching gymnastics definitely counts as a career change, though, because doing something well and being able to teach it effectively to others are very different skills.

Widely touted as Britain's best female gymnast of all time, Beth Tweddle competed in the three previous Olympics (Athens 2004, Beijing 2008, and London 2012). Not content to become sedentary, Tweddle immediately tried her hand at walking on the wings of a flying biplane. Next, Tweddle won the eight series of ice skating reality show "Dancing on Ice" in 2013. She was scheduled to appear on another sports reality show, "The Jump," but Tweddle broke her back earlier this year while ski jump training for the show in Austria.

Mary Lou Retton skyrocketed to fame when she became the first American female gymnast to win gold, from the 1984 Olympics in Los Angeles. She has spent her retirement working as a "fitness ambassador," motivational speaker, and actress. Though acting is a notoriously tough industry to crack into, her confidence and composure from gymnastics must have helped Retton — she's got more than a few television and movie credits to her name (from both playing herself and playing fictional characters).

4. Go back to school

By all accounts, gymnast Sabrina Mar was all set to take the 1988 Seoul Olympics by storm when devastating last-minute back troubles kept her out of the running. She ended up going back to school not one, but twice — first to study physiology, and later to study animation. Her subsequent career included several years working on hit Comedy Central show South Park . That's one multi-talented lady.

Dominique Moceanu was the youngest member of the "Magnificent Seven," America's first and only female gymnastics team that won the Olympic gold (in Atlanta, in 1996). Her competitive gymnastics days were both the cause of and the result of some dramatic life experiences, which Moceanu documents in her 2012 memoir "Off Balance." Moceanu also co-authored a four-part series of gymnastics books for youth.

Kerri Strug, another member of the Magnificent Seven, has also been busy since the team's 1996 Olympic heyday. After going back to school and working as a teacher for a while, Strug ended up working in politics — first within the White House Office of Presidential Student Correspondence, then the Treasury Department, and finally the Justice Department's Office of Juvenile Justice and Delinquency Prevention where she still works today.

Even though studying to become a doctor takes the best part of a decade, gymnastics careers tend to end early so there's still time! Amy Chow, another member of the Magnificent Seven who continued on to compete again in the 2000 Olympics in Sydney, managed to finish medical school at Stanford by 2010 — not too shabby! Chow is in private practice as a pediatrician, and though her previous fame and glory are certainly lost on her young patients, I imagine their parents remember watching her compete in her first career as a gymnast.

More like this
11 Trends From The ‘90s That Made You Feel So Cool
By Julie Sprankles
Remember These Ancient Pieces Of '90s Tech?
By Lucia Peters and Emma Carey
Starbucks’ Chocolate Cream Cold Brew Tastes Like This Retro Candy
By Emma Garza
Starbucks' Summer Menu Includes A New Chocolate Cream Cold Brew
By Emma Garza
Get Even More From Bustle — Sign Up For The Newsletter