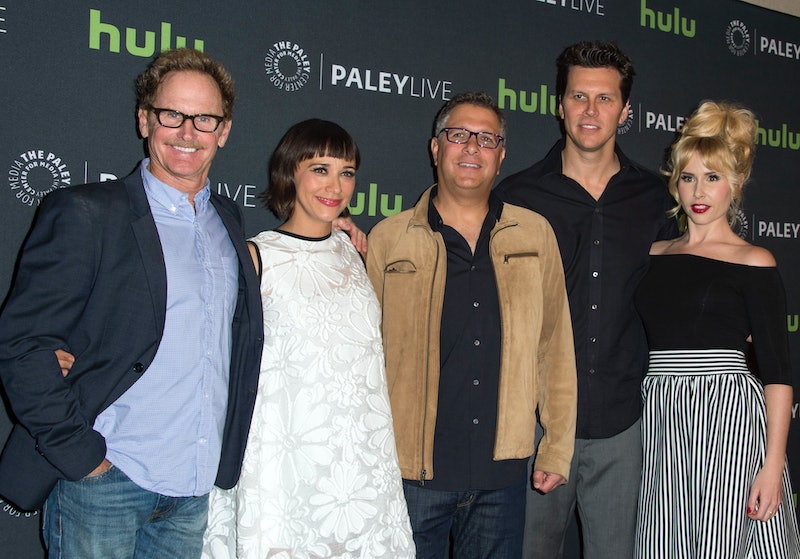 I don't think any comedy has managed to fit more jokes into 30 minutes than Angie Tribeca, which promises to have an incredibly hilarious Season 2 finale on Aug. 8. TVLine reported from a Turner Media press release back in early July that Angie Tribeca was renewed for Season 3 after the hilarious first and second season premiered back to back. But that doesn't answer the more important question: when will Angie Tribeca Season 3 premiere? Right now, star Rashida Jones has been posting pics from a recent vacation, so it looks like the new series isn't filming yet, but according to TVLine, TBS wants those new episodes as soon as possible. In the words of TBS' programming EVP, "Pulling the trigger on renewals early allows us to build on our success by giving fans new seasons more quickly."

Unfortunately, the network still hasn't announced the precise release date yet, but if it is this excited about another season, you probably won't have to wait that long to see more episodes. Angie Tribeca premiered in January 2016 by airing all of Season 1's episode in one long marathon, so that could be a possible time frame for the next season, unless TBS really speeds things up again. But no matter when Season 3 comes out, the wait is going to feel like a long, long time. So how can you help pass the time? How about by watching some other, similarly absurd comedy series? And don't worry — since the hiatus between seasons could be pretty short, so are these series, which all have 30 episodes or less to catch up on.

Unsurprisingly, Netflix is a gold mine of short but sweet comedies like First Day of Camp (so expect to see a lot of them on this list), but none have the same exact dense joke style as Angie Tribeca. If somehow you haven't watched this series, check it out! And if you did watch it last summer, watch it again — you probably missed half of the hilarious gags.

Another Netflix original, this one takes eight sketch comedians and gives the the chance to create a completely original half-hour comedy. Some go for interconnected sketches, while others eschew a framing device. For some reason, it has only a one-star rating, but passionate comedy fans should appreciate the show.

Just like Netflix, HBO is also an amazing place to find hilarious shows that don't overstay their welcome. In honor of the currently airing Vice Principals, you can catch up on Danny McBride and Jody Hill's first collaboration, Eastbound & Down, a serialized comedy about a very profane former baseball player who manages to achieve then fritter away success time and time again over the show's four seasons.

Since this series earned a Season 4 renewal, it will live to exceed 30 episodes, but you should definitely catch up on those that have already aired. Silicon Valley just finished its third season with another excellent finale and the cliffhangers in its first 28 episodes will leave you pressing "next" even when it's 3 a.m.

With just a quick four episodes, you should be able to watch With Bob & David over the course of a single afternoon. It's kind of a follow-up to the classic sketch series Mr. Show, but you don't need to be familiar with David Cross and Bob Odenkirk's first series to enjoy the belated sequel. Of course, if you're a big comedy fan, you probably are familiar, and will enjoy all the nods to the original.

To round out the list, you have to see Lisa Kudrow's amazing performance as Valerie Cherish, an aging former sitcom star attempting to mount... well, The Comeback. It's more satirical than it is goofy, but Angie Tribeca fans will surely appreciate the series' incisive and great writing. It may feel improvised, but there's a lot of skill embedded into what makes the show such a perfect mix of hilarious and uncomfortable.

I think between these series, there should be more than enough to keep you laughing until the next season of Angie Tribeca.