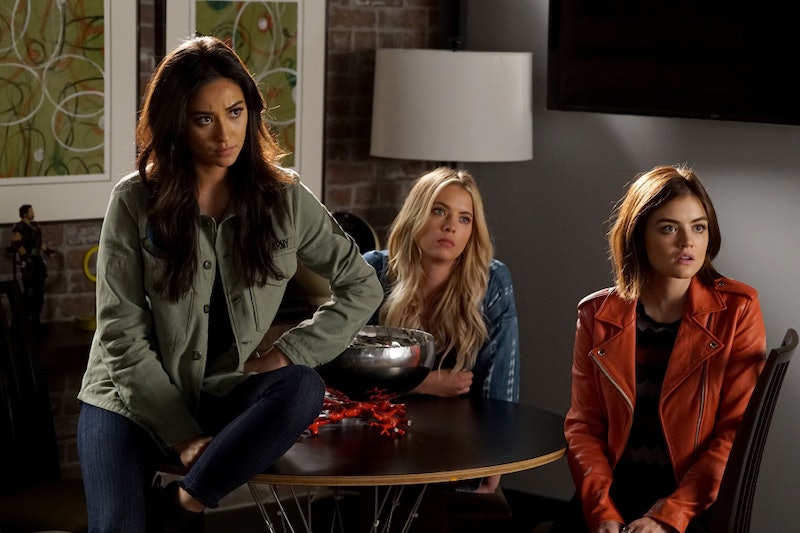 Pretty Little Liars fans have grown accustomed to loose ends and unanswered questions. For example, how did the moms escape the wine cellar after the Season 6A finale? And where is Tippi the Bird? I'm concerned. But, Season 7 seems poised to resolve a lot of mysteries that we thought would never be answered. First of all, a number of characters who we haven't seen in ages have come back to Rosewood, including Jenna Marshall and Noel Kahn — and Jason is returning to Pretty Little Liars. It's a homecoming of sorts and something tells me this isn't going to go well for the Liars. The main unresolved mystery that I would like to see addressed is whether or not the N.A.T. Club will come back into play on Pretty Little Liars?

It'll be a huge disappointment if it doesn't, because the creepy club played an important role in Seasons 1 through 4 — then the plotline was completely abandoned. It's been awhile, so let's recap — the N.A.T. Club was formed by Jason, Ian, and Garrett and its name comes from the Latin phrase "Nos Animadverto Totus," which means "We See All" in English. They got their kicks by filming Rosewood residents through their windows, and they were especially interested in teenage girls like Ali and the Liars. Melissa, Jenna, and Charlotte also had ties to the group. What's even more telling is that the N.A.T. Club was in Ali's room on the night of her disappearance — and, now that we know Charlotte was very likely lying during the "big reveal," it raises even more questions about what else they were up to on Rosewood's most tragic night.

So, here we are after the time jump and both Ian and Garrett have been murdered — meaning that Jason is the original club's sole survivor. Furthermore, he supposedly abandoned the group when he felt they had begun to take things too far. Jenna had strong ties to the club as well — so two people with a long N.A.T. Club history will be in Rosewood at the same time. I have to think that Jason's return will bring the club back into play, because it was made clear multiple times that the DiLaurentis clan had the most to lose if the tapes were ever released. In Season 3, Charlotte (who we then knew as CeCe Drake) told Emily that Ali had called her in a panic over the N.A.T Club videos and stated that "everyone" wanted to get a hold of them, especially Melissa. The Hastings and DiLaurentis families are inextricably linked (and they're not especially fond of each other), so that could be a clue.

The N.A.T. Club was last mentioned during a flashback in the Season 4 episode "A is for Answers." During a confrontation between Ali and Ian, he warned her that the tapes would "bring down" her entire family. Plenty of DiLaurentis family secrets have been revealed since then (like, you know, Jessica's secret twin) — but they certainly are hiding many other things, so I'm sure the videos have more dirt on the DiLaurentis clan. It's also telling that this direct threat to Ali's family was the last we heard about the N.A.T. Club. Coincidence? I don't think so. Sure, there are plenty of unanswered questions about Jason — but I think his return is a sign that we'll finally get some answers about this creepy, mysterious club.