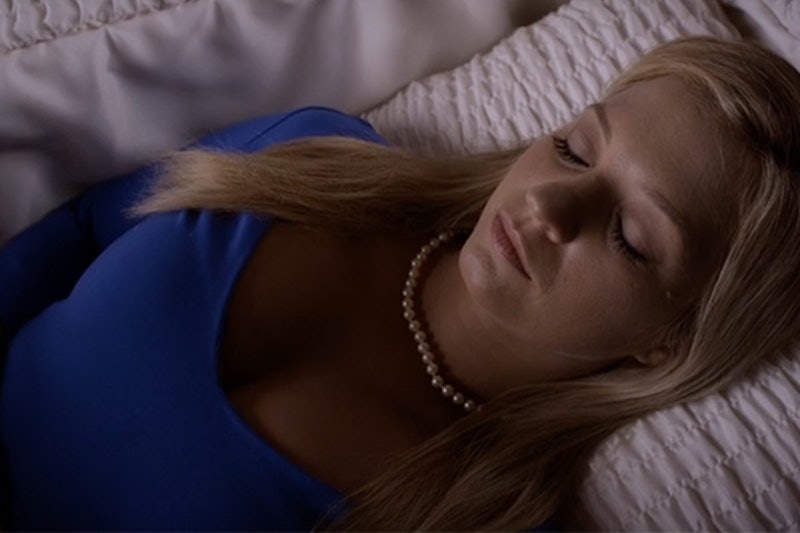 Whenever one mystery is solved on Pretty Little Liars, about 10 others immediately crop up in its place. Although many fans (*raises my hand*) were disappointed by the Season 6A finale, Charlotte's story appeared to answer many of our questions — but, now that we know she was likely working with Rollins the entire time, it casts doubt on pretty much everything she told Ali and the Liars. The Season 6B finale certainly dropped a number of bombshells that helped make up for the disappointing "Summer of Answers" — the most jaw-dropping of which was the reveal that Jessica has a secret twin and therefore Ali and Charlotte are cousins, not sisters. But, another question about this convoluted family tree still lingers — who is Charlotte's father on Pretty Little Liars?

Mary Drake's past still remains mysterious and viewers are constantly debating whether we should feel sorry for her (if, of course, her account of how Jessica treated her is true) or if she's one of the show's worst villains yet. I still can't make up my mind, but it's interesting that she's had a fair amount of interaction between Ali and the Liars and has never mentioned who Charlotte's dad may be. Whether Mary is a villain, a victim, or a combination of the two, I really hope this question gets answered — because it could shed more light on the backstories of both Mary and Charlotte.

While we wait, here are three theories:

It seems highly likely that, while Mary and Jessica were both alive, Mary impersonated her sister on multiple occasions — and we know that Peter had an affair with Jessica, which resulted in Jason DiLaurentis' birth. When Mary and Spencer had a somewhat creepy conversation in the Season 7 episode "Bedlam," she told Spencer that none of her ex-lovers will speak to her. Although this originally lead me to believe that Spencer is Mary's biological child (which is still a possibility), it could also indicate that Charlotte is the daughter of Peter and Mary. This would make Spencer and Charlotte half-sisters and cause all sorts of drama.

2. Someone She Met At Radley

As we've seen before on Pretty Little Liars, doctors at mental institutions don't seem to have any qualms about having relationships with patients. But, I tend to think that Charlotte's dad will be a character we already know (or at least know of), and Wren told Spencer in an earlier season that his dad had a mental illness. So, I think it's more likely that Charlotte's dad was a fellow Radley patient (aka Wren's dad). It could also explain why Mary traveled to London so recently — Wren's family is presumably still in England, so perhaps she was visiting him because they're still in love and/or because he's involved in the A game.

I'm still holding out hope that Bethany Young's storyline will somehow become relevant before the series ends. Charlotte's account of Bethany stealing her clothes and sneaking out of Radley on the night of her murder may not have been accurate. As far as we know, Jessica had an affair with Bethany's father — but what if it was really Mary Drake who had a relationship with Mr. Young and it resulted in the births of both Charlotte and Bethany? Jessica always wanted Bethany to call her "Aunt Jessie" and this could be a major clue.

It seems totally possible that, while they were at Radley, Charlotte and Bethany realized they were sisters and they planned to escape together on Rosewood's most eventful night. They would have both had hard feelings towards the DiLaurentis family, and perhaps their plan was to kill both Jessica and Ali that night. (I assume Mary Drake would have been pulling the strings on this plan.) Of course, everything would have gone haywire after that darn yellow tank top caused Mona and Melissa to kill Bethany instead.

Regardless of who Charlotte's father is, I hope his identity helps piece together this complicated puzzle before Pretty Little Liars comes to an end.