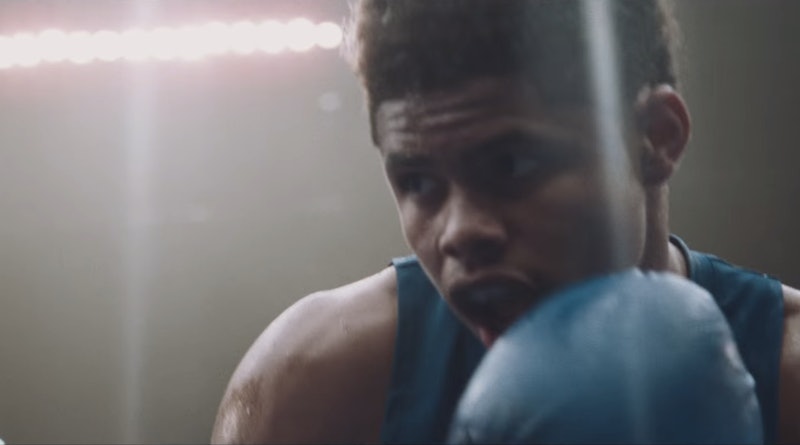 It takes Olympians of all sizes, shapes, and backgrounds to create a winning team. 19-year-old boxer Shakur Stevenson comes in at 5'8" and has all the experience of a boy who grew up in a not-so-nice neighborhood. He is incredibly proud of his hometown — one just has to take a look at his Twitter page to take in the serious hometown pride — but there might be many who don't know where Shakur is from. According to an incredibly moving Powerade commercial starring Stevenson, the teen is from a housing project in Newark where bullies hassle him, cars are set on fire, and children are forced to fight for their safety. Because of that he's "been fighting his whole life." The slogan of the advertisement, which has become synonymous with the young athlete, is "we’re all just a kid from somewhere."

According to his Team USA stats page, Stevenson began boxing at age 5 after his grandfather Wali Moses introduced him to the sport. He's been shadowboxing everywhere he goes ever since. All that practice has gone to good use, because Stevenson has a 23-0 international record and is the first American male to win junior and youth world titles and a Youth Olympic Games gold medal. He's also made it up to this most prestigious of events and will face the winner of the bout between Brazil's Robenílson DeJesus and Algeria's Fahem Hammachi on Aug. 14. If he wins the match, he will have a chance to advance to the gold medal bout.

Stevenson, who is the proud eldest of nine siblings, is even prouder of his hometown. An article from the Washington Post discussed how the boxer was born in 1997, the year after Money magazine named Newark the most dangerous city in America. Because of this, and the then-recent death of Tupac Shakur, Stevenson's mother, Malikah, named him after the rapper in hopes he would grow to be a strong and respected man. Stevenson backs this up in the article saying, "Its nickname is Brick City. It’s a hard city. You got to be tough to live there."

Team USA hasn't won a gold medal for male boxing since Stevenson's idol, Andre Ward, in 2004. Stevenson is the country's best hope to win that medal, and, if he does, he aims to bring it back to his city. In an interview with NJ.com, he shared, "I want to bring something positive back to the city. I want to inspire the kids and show them that just because you're from Newark doesn't mean you can't be something. It means a lot."

Stevenson proves that even "just a kid from somewhere" can rise to great heights and change the world. Even if the boxer doesn't get the gold this time, we certainly haven't seen the last of Shakur Stevenson. I can't wait to see what he does next.

More like this
Jake Daniels Just Became The UK’s First Active Football Player To Come Out As Gay Since 1990
By Sam Ramsden
What Is Jeanie Buss' Net Worth? The Lakers President Is Uber Rich
By Hugh McIntyre
IRL ‘Staircase’ Characters Todd & Clay Peterson Still Think Their Dad Is Innocent
By Gretchen Smail and Rebecca Patton
50 Years After Creating Her Alter Ego, Angelyne Is Still Driving That Pink Convertible
By Gretchen Smail
Get Even More From Bustle — Sign Up For The Newsletter