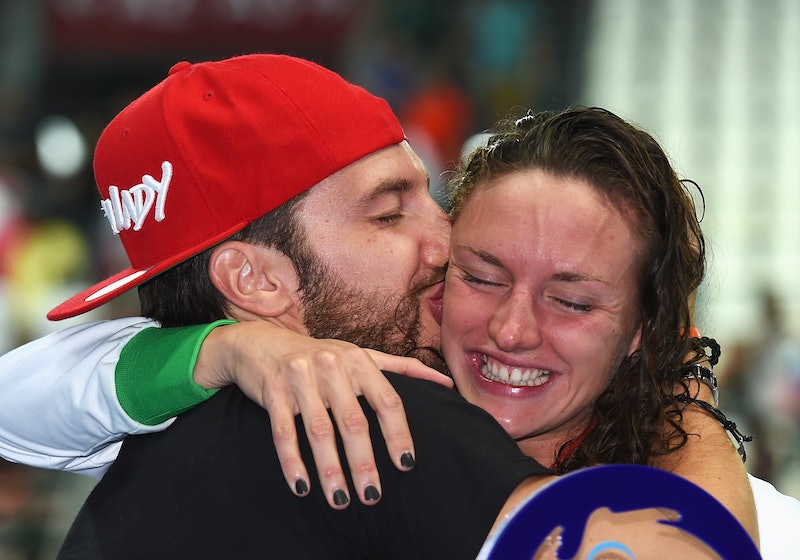 The bond between a coach and the athletes he or she is guiding to success is so close that they can end up feeling like family, with all the affection, frustration, and joy that entails. But what happens when your coach actually becomes part of your family? For Olympic athletes married to their coaches, "partnership" is a word that has just as much to do with sports as with love. Over the years, plenty of athletes have turned their relationships with their coaches from platonic to romantic. This time, at the 2016 Rio de Janeiro Olympic Games, is no different. Although the 11,000 athletes that descend on the Olympic Village at each Olympic Games are notorious for turning the Village into a hookup hub, these four athletes are probably staying on the sidelines of the lovefest. The reason? Their coaches put a ring on it.

The following four couples met through the sports that they each share. They've been preparing for the 2016 Games all year, and in some cases, their paths to a hoped-for gold medal have been long, shadowed by injury, scandal, and defeat. But all four have a solid shot at earning a medal this time around — and for the first athlete on this list, that dream became a reality just a few days ago.

This is the couple you're most likely to have heard of already, since Katinka Hosszú shattered world records on Aug. 6 by winning the 400 meter individual medley by over two full seconds — a huge margin in swimming. Hosszú, who is a Hungarian swimmer known as the "Iron Lady" for her stamina at competitions, is married to her coach, Shane Tusup. They met at the University of Southern California, where they were both swimmers.

If you were tuned in to the 2012 London Games, Kim Collins may also be a familiar name. The track and field star from St. Kitts and Nevis, who has participated in four Olympic Games, was expelled from the team four years ago for staying the night in a hotel with his wife and kids rather than at the Olympic Village. The weirdest part of that whole scandal? Paula Collins, Kim's wife, was and is his coach. Kim had wanted to get "peace and quiet" by staying with his family — and, no doubt, some last words of advice from Paula, a certified IAAF coach.

Now, in 2016, Kim Collins will make another go at the 100-meter race, with Paula at his side. “I believe in form and execution. Some coaches will say that with older athletes it’s hard to change old habits but there is always room for improvement,” Paula Collins told SportsMax.

Emily Batty is an Ontario-born cyclist who was named to Canada's 2016 Olympic cycling team after medal-worthy finishes at the Pan Am Games and the Commonwealth Games. Part of her recipe for success is coaching by her husband, Adam Morka, a former cyclist himself. “He keeps me grounded,” Batty told Kamloops This Week.

Batty says that the two actually met in a bike store, where she was getting tested, and their relationship has been based on a mutual understanding of their sports-related passions ever since. "We pre-ride the world cups together and prepare each step along the way together," Morka said in 2012. That was the year that Batty broke her collarbone while training on the Olympics cycling course. She competed anyway, coming in 24th place (which was pretty incredible, considering her injury). Now, Batty has another shot, and her recent cycling record could bolster her all the way to the gold medal.

You might have caught both Jared and Claire Tallent competing in racewalking events at the 2012 Olympics, where they both represented Australia. Jared won a gold medal in the 50-kilometer walk, and he's hoping to reprise his performance in Rio. This time, though, Claire is accompanying him as his coach, not his teammate. After the 2012 Games, Claire retired from competing and became her husband's coach. "We’re pretty much together all day. We train together in the morning and the afternoon, which can take five hours most days, and then we have a few hours in the middle of the days between sessions, where we might be apart, but we are generally together all day," Jared said.

This year, Jared and Claire will be joined at the Olympics by Rachel Tallent, Jared's younger sister and a racewalker herself. Jared is in turn Rachel's coach, so between the three Tallents, there's a ridiculous amount of skill and success.