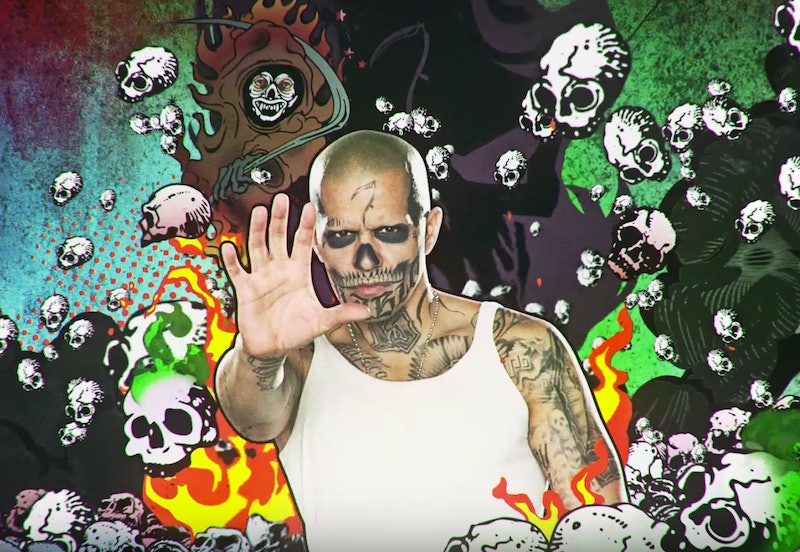 After the dust had settled on Suicide Squad, and all was said and done (by Deadshot and Harley Quinn), one Squad member stood out as a surprise hit: El Diablo. El Diablo is, without a doubt, Suicide Squad's secret weapon. Though he resisted being drafted into battle at first, the former gang member ended up bringing the Squad together and coming through in the final battle — all in a day's work. The fiery anti-hero played by Jay Hernandez (Crazy/Beautiful) is definitely a fan favorite, but just because the fans love him doesn't mean he survived the life threatening Suicide Squad battle. Spoilers ahead! Did El Diablo really die in Suicide Squad ? Sadly, it seems likely.

After being convinced to use his considerable fire power in battle, confessing to (accidentally) murdering his wife and children, saving Harley, Deadshot, and Flag from hallucinations, and embracing the full extent of his powers to take down one of the big bads, Diablo sacrificed himself for the Squad. While fighting the Enchantress' evil brother, Diablo really showed the Squad what he could do, not only aiming waves of fire at him, but turning into a giant fire monster, more than capable of forcing the evil brother into a corner, where Flag and his men had set up an explosive to kill him. Unable to escape the blast without also allowing the evil brother to get away, El Diablo asked Flag and Deadshot to set of the blast, knowing it would kill him.

El Diablo's sacrifice was his final act of redemption — a way of using his powers to protect his newfound family of crazy villains and do something good with the powers that ended up killing his wife and children. And, while I had hoped that he would rise from the ashes like a glorious, damaged phoenix, he didn't. It seems, then, that Diablo is truly, and completely, dead.

Diablo's death is part of what makes him the puzzle piece that makes the Squad all come together. It's the final push the Squad needs to fight together with Flag, instead of fighting each other. Diablo was so crucial to the group because he was the first member of the Suicide Squad to actually have morals: he didn't want to use his powers to hurt people. He was also the first to really open up to the group by telling them about his family. Owning up to killing your own children is no small thing, even if you're confessing to hired hitmen and cannibals. He also wasn't obsessed with escaping from A.R.G.U.S. custody because he understood that he was dangerous, and that he had committed crimes that many, including himself, would find unforgivable. And his death drove the rest of the Squad to understand the moral value of sacrificing oneself for others and gave them hope for redemption.

Diablo's death in Suicide Squad might have helped the rest of the Squad really come together, but it's really a blow to fans. El Diablo was one of the more compelling members of the Squad, with a heartbreaking backstory and a visually stunning power. The extent of his power was marked as "unknown," which means he was also the member with the most potential for potential for growth and original stories. This version of El Diablo is a relatively new comic book character, which means future DC movies could have taken a bit more creative license. Not being married to source material would have opened up so many possibilities in a world often too tied down by fan service. Also, if the initial fan response is any indication, an El Diablo solo film would not have been unwelcome.

Of course, no character fate is permanent in the comic book world. It's still possible for El Diablo to be revived, be it for Suicide Squad sequels or prequels or anything in between. Here's hoping there's more of this character ahead.