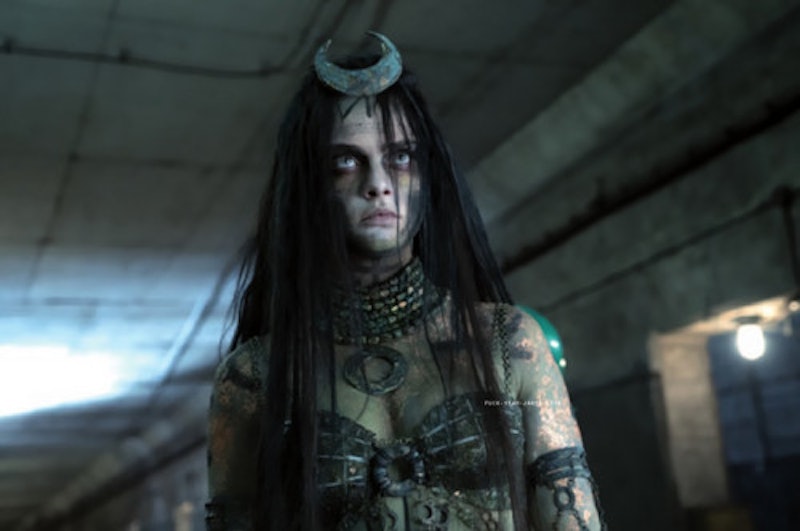 Suicide Squad did something pretty remarkable. I'm not talking about using villains as heroes, or giving the Joker tattoos, or saving DC's reputation after the Batman v Superman backlash... I'm talking about how the movie managed to keep its main villain a secret until the film premiered. Now that it's out, people finally know that the Enchantress and her previously unannounced brother are who the Squad unite to fight, and while fans know plenty about Enchantress, her bro largely remains a mystery. So just who is Enchantress' brother in Suicide Squad ? Small spoilers ahead!

The brother of The Enchantress is named The Incubus, and like his sister, he's very powerful and very bad news. He, too, is an ancient deity, and he is brought back to Earth by his sister, who resurrects him after she herself takes over the body of archaeologist June Moon. The purpose of his resurrection is to take over the world, with the idea being that Enchantress and Incubus united would be unstoppable. Of course, they didn't count on the Suicide Squad showing up, so there's that. Incubus is by any definition an obscure character, more so even than Enchantress, but he does have a history within the pages of DC Comics. Specifically, he factors quite strongly in a particular storyline that likely provided the basis for the film.

The story in question comes from "The Nightshade Odyssey" as seen in Suicide Squad vol. 1, issues 14 & 15. In that arc, June Moon is actually a member of the Squad, and they are led by squadmate Nightshade (who's not in the film) into another dimension full of evil creatures similar to what's seen in the movie. There, they meet the man in charge of these creatures: Nightshade's brother. It's then revealed that her brother is actually possessed by Incubus, who desires to reunite with his sister to bring about world domination. Moon unleashes Enchantress to fight him, but when she does so, it's discovered that Enchantress is actually Incubus' sister, Succubus — not Nightshade as the team had believed. Obviously, the movie skips over the Nightshade aspect and has Enchantress as the instigator, but the main theme of Enchantress reconnecting with her brother Incubus to raise hell remains intact.

This theory is seemingly backed up by director David Ayer, who told Sean O'Connell of Cinema Blend about the villain, "Incubus. It's a little bit obscure, but it is right out of canon. It's one of the first Suicide Squad [comics] I read, where [Enchantress] and her brother end up transporting these people into different dimensions, and it was kind of like, 'Whoa, that's insane. I'm going to go for that.'" Sounds like the "Nightshade Odyssey," no?

Echantress' brother Incubus is definitely bad news, just like his sister. But to be honest, it's kind of nice to see a brother and sister who get along so well together in a movie.

More like this
“The Door Is Always Open” For Another 'Breaking Bad' Spin-Off, Says AMC Boss
By El Hunt
Neil Patrick Harris Will Play 'Doctor Who's “Greatest Enemy” Yet
By El Hunt
Everything To Know About 'The Hunger Games' Prequel Movie
By Grace Wehniainen and Radhika Menon
Everything To Know About 'Scream 6'
By Jack Irvin and Jake Viswanath
Get Even More From Bustle — Sign Up For The Newsletter