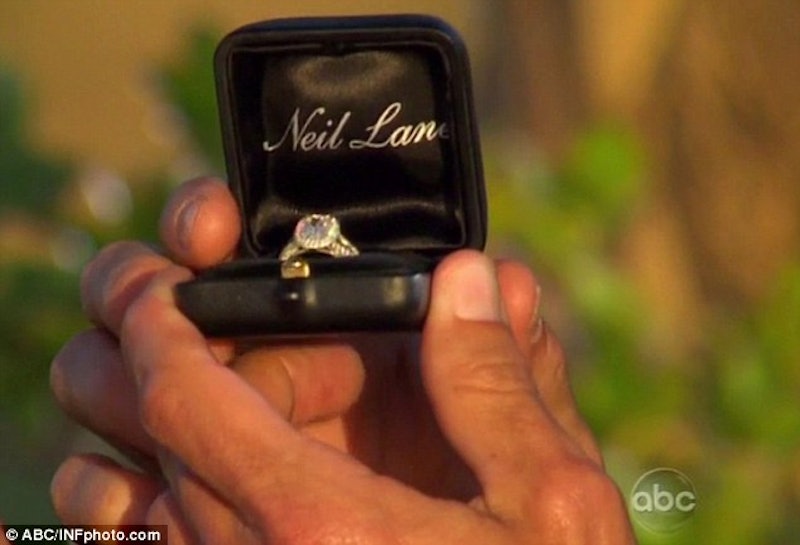 Like those before him, if Juan Pablo proposes during the Bachelor finale, he'll be presenting the lucky lady with a flashy Neil Lane engagement ring. Traditionally the show's rings are bedazzled in diamonds and carry a hefty price tag. Jef Holm proposed to Emily Maynard with a jewel that cost $68,000, according to Us Weekly. So how do these guys afford something so expensive? Are the engagement rings on the Bachelor given away for free? Great question.

Like the fantasy suite, the exact details of the ring have always been shrouded in mystery. It's not known for sure whether Neil Lane "donates" the rings in exchange for the promotion, or if ABC foots the bill, but one thing is for sure: the contestants definitely don't have to put any money down. It's all about the fairy tale ending on this show and it's not quite as storybook if the ring is only what the guy happens to be able to afford.

If Neil Lane does actually forgo getting paid in exchange for the product placement, he doesn't have too much to lose. According to Jesse Csincsak, who was once TV-engaged to DeAnna Pappas, "In the contract, it says if you are not together for two years after the final day of the show airing, you have to give them the ring back." And that happens pretty often, let's be real.

But not all Bachelors have let Lane have that kind of ownership on their ring. Way back in Season 2, Aaron Buerge decided to forgo the show's standard procedure and paid for a 2.15 carat Harry Winston ring himself. Of course in the end, he and Helene Eksterowicz didn't last anyway, and she ended up selling the ring on eBay for $28,300.

But in recent years, all the men have chosen from Lane's (pretty slim) pickings because either they think they'll make it the two years or they just don't want to spend their own money.

Sean and Catherine even let him design their wedding rings. With all this free promotion, Lane has become as synonymous with The Bachelor as red wine, crying girls, and roses. And it seems like the partnership between him and ABC is working because he's stuck it out much longer than most of the show's relationships have lasted.

So will Juan Pablo propose with one of those rings tonight? This deleted scene of him talking to Neil Lane makes things look iffy. "So tell me about the girl," Lane says, assuming JP has one in mind to wear the ring he's choosing. "Tell me about the girls?" Juan Pablo corrects, clearly having not narrowed his options down yet. Watch the clip below:

More like this
Here's Our Ranking Of The Funniest 'Bachelor' Casting Ad One-Liners So Far
By Grace Wehniainen
Where Is Clayton Echard Now? The Former 'Bachelor' Star Is Dating Susie Evans
By Kadin Burnett
Former 'Bachelor' Producer Elan Gale Knows The Secret To Your Favorite Shows
By Samantha Rollins
Why Did Meatball Leave 'The Bachelorette'? His Second Chance Didn’t Last Too Long
By Grace Wehniainen
Get Even More From Bustle — Sign Up For The Newsletter