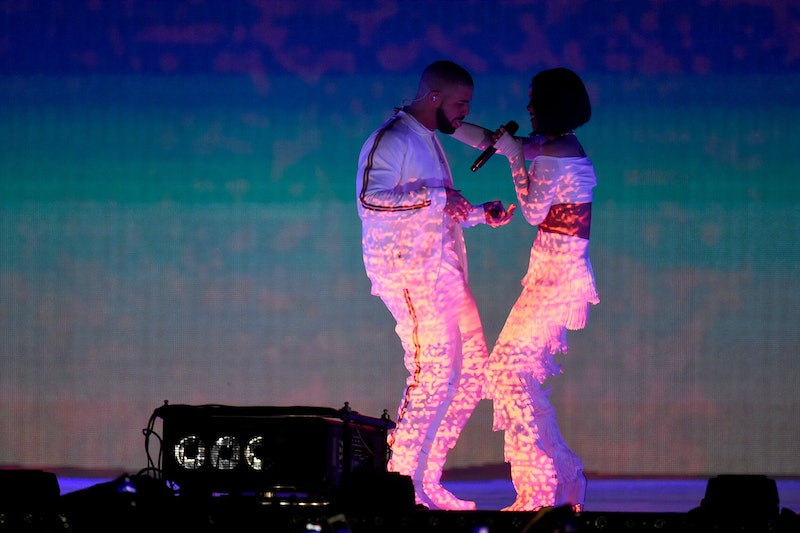 In the seemingly never-ending romance saga between Drake and Rihanna, some new comments may add context to the "Are they together? Are they not?" debate that's plagued pop culture for the past seven years. During his concert at Madison Square Garden on Sunday night, Drake admitted his love for Rihanna. But before you get too excited, there's a caveat. According to E! News, he later asked what the women in the audience were up to later, since he was free after the concert. Definitely raising my eyebrows in skepticism right now, so let's evaluate the situation. Before singing "Work," Drizzy told the crowd,

Yup, everybody knows. Granted, it's unclear whether he met friendly love, but back in June, Drake told the audience in Manchester, "Shout out to the most beautiful, talented woman I've ever seen. She goes by the name of Rihanna...I'm gettin' my heart broken." If RiRi ever needs an ego boost, she should just follow Drake around, because he loves gushing over her. And honestly, it's sort of sweet. He's got no shame in his game. Whether Rihanna is interested in him (which seemed possible, given those dating rumors), he's not shy about his feelings for the "Diamonds" singer.

At the same time, things are definitely on the casual side if they are together. That's because, as mentioned earlier, E! also reported that Drake told Sunday's crowd, "Where's all my New York women tonight at? 'Cause I've got a night off after this." Hmmm, he could just be teasing the crowd, but that sounds rather flirty to me. In which case, I suppose that means he's not going home with Rihanna.

Whether or not they're actually a couple, there's some sort of love between them. I just want them to work, work, work, work, work things out. Because they're the real OTP in the music world. (Sorry, Bey and Jay!)

More like this
Rihanna Is A Mom Now After Giving Birth To Her First Baby With A$AP Rocky
By Ananya Panchal and Jake Viswanath
Is Megan Fox Pregnant? MGK Gave A Shout-Out To Their “Unborn Child” Onstage
By Hugh McIntyre
Harry Styles Opened Up About Olivia Wilde With A Rare Comment About "Trust"
By Sophie McEvoy
Joe Alwyn Reacts To Taylor Swift Earning An NYU Doctorate In A Rare Interview
By Jake Viswanath and Nicole Pomarico
Get Even More From Bustle — Sign Up For The Newsletter