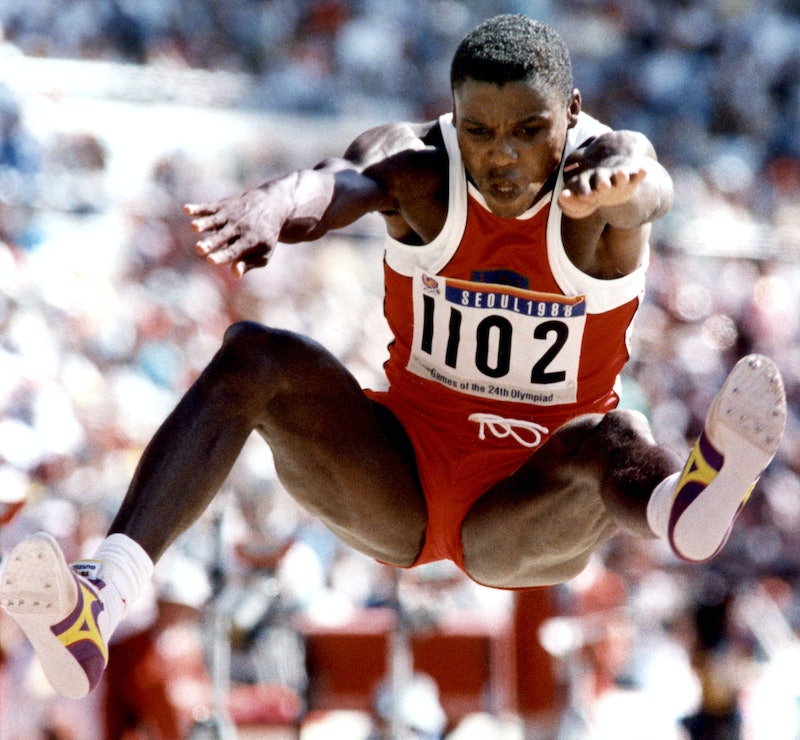 With athletics in full swing at the Rio 2016 Olympics (we've already had a Usain Bolt gold, so you know everything's going as planned), it can make us wonder about the current lives of the great athletes of yesteryear. Michael Johnson, the former 400m champion, just saw his own record broken yesterday by the South African Wayne van Niekerk, and cheerfully called the race "a massacre" from his commentating box at the BBC; but one of the US's track stars, Carl Lewis, has had a more antagonistic role to play in this year's Games — the same kind of role he's played in the world of track and field since he first arrived in it. Lewis is one of the sport's most awarded figures as well as one of its most controversial, and though he is now retired, his words still encourage a combative reputation.

Anybody who grew up watching the Summer Olympics of the 1990s knows Carl Lewis's name. Like his idol, American sprinter and long jumper Jesse Owens, Lewis absolutely dominated the sprint and long jump events, maintaining both an on-track supremacy and an off-track confidence that gave him international fame. Usain Bolt's archer pose is nothing to Lewis's playing of the press in his heyday; journalists dubbed him "King Carl" for his tendency for rudeness to the press corps and his unquestioning belief in future victories. But alongside the public persona was a formidable athlete: after the US's boycott of the 1980 Moscow Games prevented his initial debut, he won nine golds at the Los Angeles, Seoul, Barcelona and Atlanta Olympics, and eight world championship golds along the way.

Seoul, however, remains his most infamous Olympics. At the time, he was maintaining a fierce rivalry with the sprinter Ben Johnson, who was expected to beat him at the post for the 100m gold; but Johnson was disqualified after failing a doping test, and Lewis ran away with the gold. Lewis has since admitted that he himself failed three tests during the Olympic trials for Seoul, and has been completely unapologetic about it. "Who cares?" he told the press in 2003, when the revelation came out. "There were hundreds of people getting off. Everyone was treated the same... The climate was different then. Over the years a lot of people will sit around and debate that [a steroid drug] does something. There really is no pure evidence to show that it does something. It does nothing." (It's important to note that his results in 1988 would allow him to compete under 2016 doping rules.)

With that in mind, it's interesting that Lewis has been one of the world's most vocal anti-doping campaigners in the years since his retirement. Earlier this week, he told an event that he believed anti-doping education for promising athletes should start in childhood. And before Rio began, with athletics gripped by doping scandal after doping scandal, he told Euro News, "If you want to be the leader [in anti-doping measures] then you have to take the lead, and that was a lot of the criticism I received because I did take a lead in trying to make our sport professional and trying to stop the drug problem; so of course you are going to get push back from other places. But I want to continue to push the athletes to take the lead, because I don’t see the athletes stepping up and talking about the issue enough and I think we would be very well served if they did it.”

His doping campaign hasn't met with universal acclaim, though. Usain Bolt declared he had "lost all respect" for Lewis after the former sprinter decided to become involved in a 2015 spat between Bolt and his sprinting rival Tyson Gay, who had served suspensions for doping. Bolt made it publicly clear that he thought Gay should be banned permanently, but Lewis told reporters at a sports award ceremony that "he (Bolt) has raised a legitimate issue and I understand that, but rules are rules. But see a Jamaican is talking about it. Lots of doping issues have come out in Jamaican athletics in the last 4-5 years. He should first think of cleaning up his own house." Bolt didn't take kindly to the insinuation of doping among his countrymen, and a bitter war of words ensued.

It's not the first athlete at the Rio Games with whom Lewis has tangled, either. British long jumper Greg Rutherford, who won gold in the event at London 2012 and bronze at Rio, had to deal with criticism from Lewis back in March that his jumps were "pathetic". Lewis's criticism? That the jumps of 2012 and 2016 were far short of his own world record. "The long jump is the worst event in the world right now. Awful," he told the press. "If I jumped 26 feet I'd walk away and say 'don't measure that, make it a foul.'" Mike (Powell) and me were jumping 28 feet regularly. But this generation? Rutherford? I'm sorry, but it's pathetic to me. He's won everything. Are you kidding me? He's doing his best. He's jumping great. But he shouldn't be winning with that."

Rutherford hit back with an editorial for Euronews, in which he declared it "a pity that Carl appears to be feeling so strangely insecure about himself and his achievements that he is compelled to spout derogatory comments about the sport as a whole," said he was "a man craving attention," and noted that "I don't need validation from Carl Lewis." And Jeff Henderson, the American who won the gold from Rutherford at Rio, noted at his press conference that ”I guarantee you Carl Lewis can’t say much about it now."

Aside from making grand statements ("the sport is dying", he announced to ESPN in July 2016, incurring quite a lot of wrath from American athletes), he's had quite a storied career since quitting competition in 1997. He attempted to run as a Democrat in the New Jersey Senate in 2011 but was disqualified, has appeared in various movies and TV shows, and is an active advocate for veganism. He had brief forays into both music (with one album) and other sports, as he was bewilderingly drafted by the Dallas Cowboys in 1984 despite never playing the game.

Unsurprisingly, he's also a coach for elite sprinters at the University of Houston, thought he freely admits that he doesn't expect to see anybody of his own level of talent: "I tell recruits that I won nine gold medals. I was Olympian of the century," he told Athletics Weekly. "I don’t take a dime to coach for this university. I don’t need anything from you but your success."

More like this
How To See The Lunar Eclipse On May 15-16, 2022
By Kaitlyn Wylde
How To Fight For Reproductive Rights, Based On How Much Time You Have
By Courtney Young
Here’s What Sarah Jessica Parker’s Canned Cosmo *Actually* Tastes Like
By Emma Garza
Rihanna & A$AP Rocky’s Astrological Compatibility Proves They'll Be Amazing Parents
By Nina Kahn
Get Even More From Bustle — Sign Up For The Newsletter