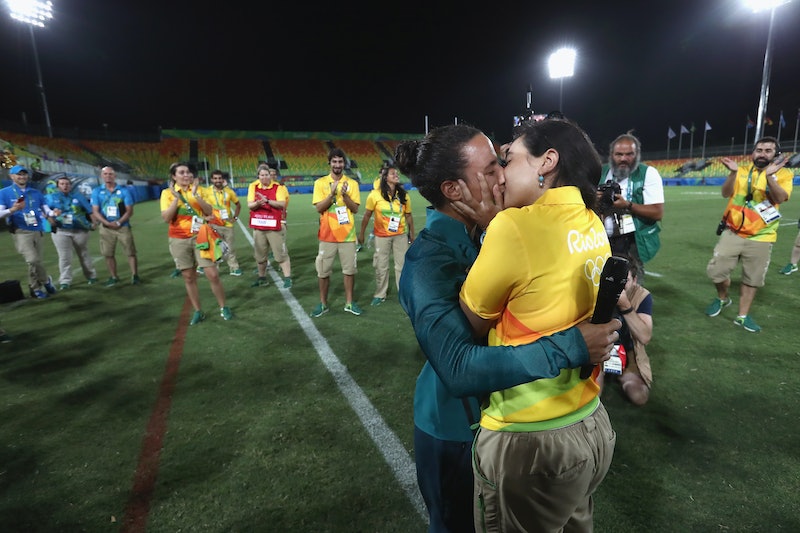 The Rio Olympics hasn't been without its controversies, to put it mildly. For all its rhetoric about bringing people together in the spirit of sport, it's being held in a country where poverty remains an endemic issue and peaceful protests about the costs of the Games have only just been legally allowed. But the competitions have continued with enthusiasm, and people are heralding images like North and South Korean gymnasts taking selfies together and Egyptian and German volleyball players competing on equal ground as the "essence" of the sporting world. Sports, in other words, are supposed to bring out the best sides of us. But can sports actually create real social change beyond photo opportunities?

The spirit of the Olympic Games in modernity, at least according to its founder, the Frenchman Pierre de Coubertin, was all about the use of sport as a means to bond nations: "May joy and good fellowship reign," he said of the Games, "and in this manner, may the Olympic torch pursue its way through ages, increasing friendly understanding among nations, for the good of a humanity always more enthusiastic, more courageous and more pure." But the Olympics is only the elite pinnacle of the sporting world; and in much smaller, less expensive and sparkly ways, sports are seen as a facilitator of community development, helping to mend divides in shattered countries, give kids somewhere safe to go, and foster community spirit. Nobody's alleging that a good game of rugby will sort out the world's political issues; but shrewd development specialists have seen that, particularly for children, it can do more than just get them some fresh air.

Here are seven ways in which sports are changing our social world at a grassroots level, from fostering gender equality to helping out refugees and veterans.

Sports is often the common denominator in regions that are otherwise seriously divided by cultural, racial, or geographic conflict, and that's something that sporting advocates tend to try and use to their advantage. The famous "Christmas truce" between German and English troops in 1914 across Europe's World War I trenches included what the BBC has called "some informal kick-abouts" with a soccer ball. But there are more modern versions. Research in 2010 found that sport in hugely ethnically divided Sri Lanka was helping to bring together three distinct communities, the Sinhalese, Tamil, and Muslims. Sports, the report indicated, "can create ‘momenta of togetherness’ for members of disparate ethnic groups," and mend old divides by working towards a common goal (literally, in this case).

2. Keeping Kids Out Of Gangs

One of the most-cited reasons for installing sporting facilities in crime-ridden areas is that they give kids an opportunity to find a safe space away from gang life. Charities like Fight for Peace, which provides a boxing gym for people in impoverished neighborhoods to escape gangs in South Africa, and AIR Sports Network, a government non-profit that focusses on using sport to help stop young people from reoffending, are trying to use sports as an outlet and protective space to insulate young people from criminal influence. There are some high-profile successes, too; English soccer player Andre Gray still bears an inches-long scar on his face from a gang-related knife attack in his teens, but now plays for the club Burnley and credited sport for giving him the "kick up the arse to get out".

For all the rift-healing power of sport, it can also be insular, a pack with its own team logic, and that contains the possibility for social change too. LGBT sports leagues around the world are a demonstration of the social power of sports for minorities; particularly if LGBT people have no other safe place in which to socialize and bond with other people with similar orientations, sports leagues give a structured team foundation and a ready-built community. You can now find LGBT sports leagues in virtually every major city in America, and then there's the Gay Games, held every four years (the next one's in Paris in 2018).

It turns out that sports also serves a hugely crucial function for disabled vets, some of the most vulnerable ex-armed forces members when it comes to mental health issues and general quality of life. A U.S. study released in 2015 found that participation in wheelchair basketball and other sporting events was a massive boon for disabled vets; the longer they participated and the more team-oriented their sports were, the more likely they were to be happy, healthy, and have better self-esteem.

5. Giving Refugees A Chance To Relax

There is basically nobody in the world who's been unmoved by the Refugee Team at Rio 2016; if you say it didn't make you a little emotional I don't believe you. But beyond the colossal odds of these few athletes, who made it to Olympic level despite the giant upheaval of fleeing a country, sports are also being used to help the refugee community in wider ways. The International Olympic Committee invested $2 million from its emergency fund into providing sporting facilities at the largest refugee centre in Greece, including 600 pairs of running shoes and four basketball courts.

“By providing these sports facilities," said the IOC President when they opened, "we want to give some hope to these refugees. We want to give them at least a little joy of life in these difficult circumstances. We want to give them the opportunity to mix with each other. Here you saw refugees from Syria, from Mali, from Sierra Leone, from Iran, from Iraq, all playing together with us, and really showing a small Olympic community here in this camp.”

Sports initiatives aimed specifically at children are often trying to teach them life skills and new perspectives. PeacePlayers International is one of the organizations that focuses on something very specific: teaching kids from traditionally warring communities (Israeli and Palestinian children, for instance) that you can have peaceful, fun conflict without the need for violence. Its motto is "Uniting Communities In Conflict Through Sport," and it attempts to bring together children from conflicting ethnic backgrounds to empathize with and play against one another, in the hopes of creating better, less war-torn futures.

This is another take on the impact of sports exposure on children's education: specifically, the idea of gender equality. Exposure to phenomenal female athletes like Simone Biles and Katy Ledecky is crucial for helping younger generations understand that women can be powerful, strong, and kick-ass; but it's not just about media. At a 2012 forum called “Tackling Global Poverty with the Olympic Spirit," UNICEF Regional Director Bernt Aasen explained that a particular type of football game was being used to impress gender equality on young boys.

"Not only were football teams required to have a specified quota of girls," wrote development expert Isuru Devendra, "but it was also mandated that the first goal scorer be a girl. This changed the dynamics of the game dramatically. No longer were the girls on the team merely there on the fringes to fulfill the quota, but teams were forced to substantially involve girls in the play to ensure that the first goal scorer criterion was fulfilled." The boys had to involve girls to win, and in the process were exposed to their athleticism and right to score.

More like this
Lydia Leonard Is Setting The Record Straight
By Olivia-Anne Cleary
How To Fight For Reproductive Rights, Based On How Much Time You Have
By Courtney Young
How To See The Lunar Eclipse On May 15-16, 2022
By Kaitlyn Wylde
Sandra Bullock, Girlboss Extraordinaire
By Matt Harkins & Viviana Olen
Get Even More From Bustle — Sign Up For The Newsletter