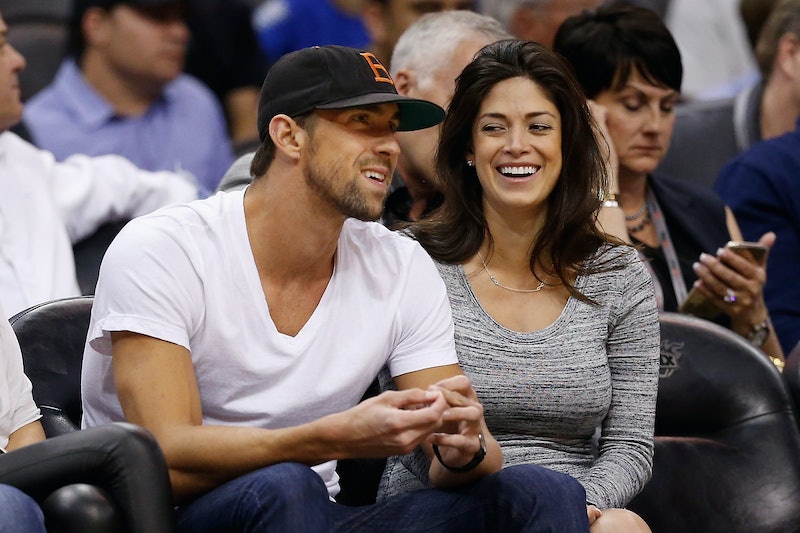 Perhaps the most talked-about athlete at the 2016 Olympic Games in Rio de Janeiro is Michael Phelps, who has more Olympic medals than any other competitor in history. While the internet is buzzing with Olympic enthusiasts wondering if Phelps will add to his medal count, others are wondering: when is Michael Phelps getting married? Since February of 2015, Phelps has been engaged to Nicole Johnson, a former Miss California USA, model, and production assistant at ESPN. Their son, Boomer Robert Phelps, was born on May 5 of this year. But Phelps and Johnson have remained mostly mum about their wedding plans.

Phelps and Johnson had actually been dating on and off for about eight years before they got engaged. The couple had reportedly been broken up while Phelps prepared for the 2012 London Olympics. The two got back together sometime during 2014, and have been going strong since. And, things are only looking up for the Olympic swimmer — Phelps just won his 19th gold medal while competing in Rio. There were rumors that Phelps and Johnson were going to secretly tie the knot in a pre-Games ceremony, but that doesn't appear to have been the case. It seems more likely that the couple will marry shortly post-Olympics.

In a Team USA article that announced the birth of Boomer Phelps, Craig Bohnert said that Phelps and Johnson hadn't picked a date yet, but that the ceremony would occur after the Games.

So how soon can we expect a Phelps-Johnson wedding after the Games conclude? It's unclear, but the wait probably won't stretch on for too long. Plus, the 2016 Olympics will probably be Phelps' last, he says (although he said that last time, too). Assuming he turns his focus to his family, as he seems to be doing, a wedding ceremony in the next few months certainly isn't out of the question.

And maybe, if they keep the ceremony intimate, Phelps can just give out a medal to each guest as a favor. What's he going to do with all of them, anyway?

More like this
Ryan Reynolds Brought Some Famous Friends To Wrexham A.F.C's Last Game Of The Season
By El Hunt
Jake Daniels Just Became The UK’s First Active Football Player To Come Out As Gay Since 1990
By Sam Ramsden
What Is Jeanie Buss' Net Worth? The Lakers President Is Uber Rich
By Hugh McIntyre
Kaley Cuoco & Tom Pelphrey Just Made Their First Public Appearance As A Couple
By Hugh McIntyre
Get Even More From Bustle — Sign Up For The Newsletter