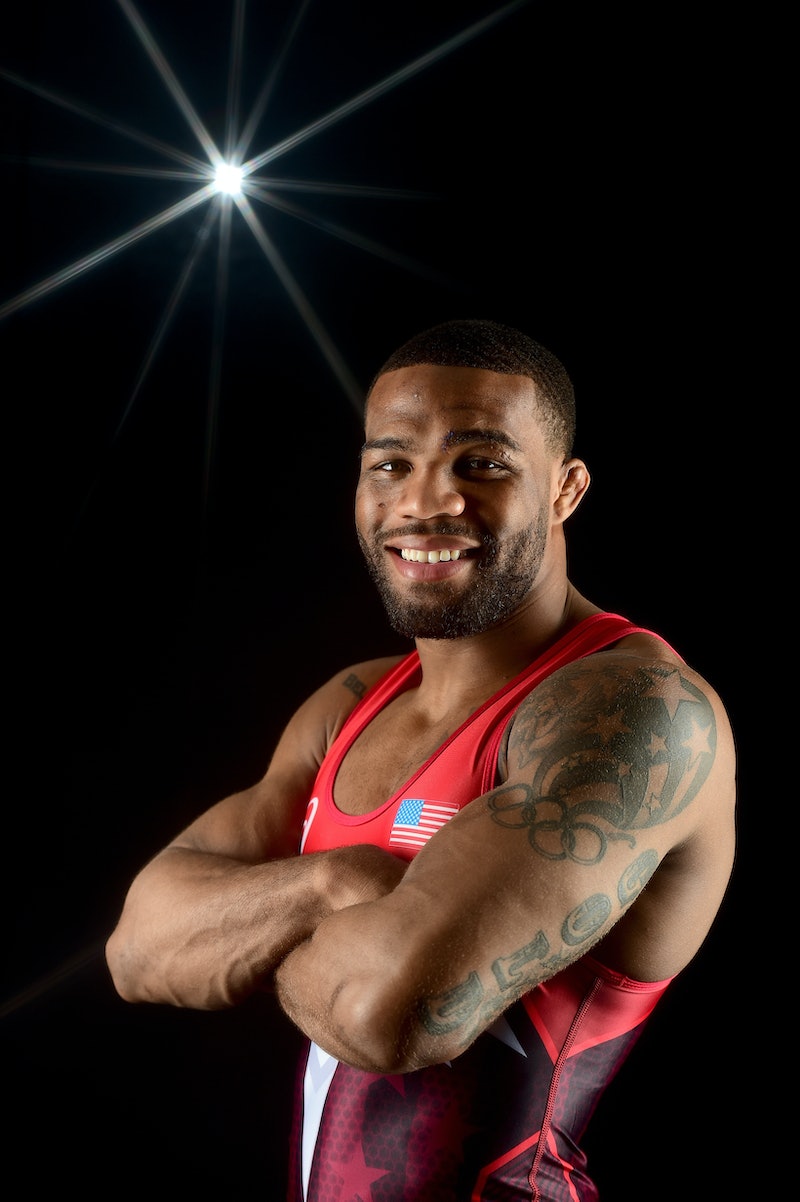 I don't know if you've noticed literally every person on the internet (and TV) talking about it, but the 2016 Olympics are in full swing, and coming up soon is the wrestling portion of the games. And if you're planning to watch, you may notice there's a certain Team USA member you'll want to keep your eye on: Jordan Burroughs. He may only be 28 years old, but he already scored a gold medal in the 2012 games. And aside from his impressive wrestling career, something I love about him is his adorable family. He's married with two precious kids, but how did Burroughs meet his wife, Lauren Mariacher? Their love story started with sports, as you might have predicted.

As Burroughs and Mariacher write on the website they created for their October 2013 wedding, their first meeting was made possible by wrestling and a little bit of kismet. Here's what they wrote — although I have a feeling this one was all Burroughs:

Lauren searched high and low her whole life for this stud. She knew he was out there somewhere, and it was only a matter of time before she found him. She went to college. Nope. She went to church. Not there either. Then one day she went to a wrestling tournament in Philadelphia -- the 2011 NCAA Championships to be exact. Lauren was there to watch her brother Matty compete for American University, but there was another wrestler there that weekend that would catch her attention. A young stallion named Jordan. Jordan just so happened to be wrestling on the mat located directly in front of the section of the stands where her and her family were seated. As she peered down to the mat, she thought, "Is this a dream?" He was beautiful, ripped, and confident. She requested him on Facebook when she arrived home, and he thought to himself, "Wow, a good looking wrestling fan!" He messaged her, and they began chatting. A few months later, Jordan agreed to teach a wrestling clinic in the area and asked Lauren if she would like to meet him. Of course, she obliged. More than a few phone calls, texts, emails, and visits later, here we are...Engaged! Now guess who wrote this?

And if you think that's cute, just wait 'til you see photos of them together. The family pics they've shared on Instagram are enough to prove that they were totally meant to be. Just look at this beautiful couple!

If you love photos of cute people in love plus their crazy adorable kids like I do and you're not already following these two on Instagram, you need to be. Seriously. Because now that they're a family of four — as of just two months ago when baby Ora was born! — these family pics just cannot be beat.

And even before there was Ora, they were all still super cute.

It's official: This family has to be the most adorable Olympic fam at the games this year. It's kind of unfair since it's impossible not to gush over Beacon and Ora, but if they gave out old medals for cute kids, they'd totally have it. I can't wait to see more from this gang as the games continue. Their dad is lucky to have them cheering him on!