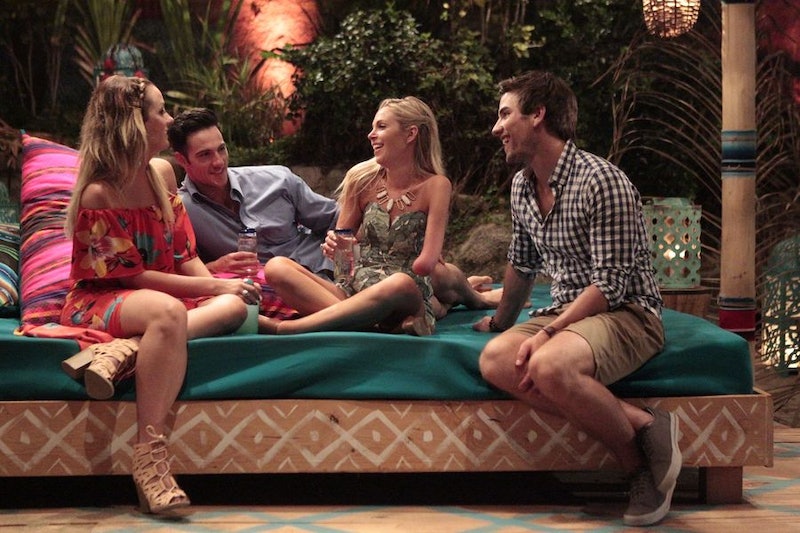 The third season of Bachelor in Paradise is already chock full of hilarious and weird moments. But, over the show's three seasons, I'm willing to bet that there were tons of insane Bachelor in Paradise moments you missed. The episodes are super long (two hours), and there's so many cast members going in and out of the show each week that you need to be paying close attention just to follow what's going on, let alone pick up on some of the show's weirder elements.

And, I'm not going to waste your time bringing up things like Clare being the raccoon whisperer, either — if you didn't notice that weird moment, then you weren't really watching the show so much as looking at it. This article is a tribute to things that went under the radar in the first few seasons, are so ingrained in the fabric of the show, or happened so recently that there's a good reason why you won't have noticed them. Here's to all of the things about Bachelor in Paradise that may seem normal, but are actually some of the bizarrely wonderful things that all fans love about the series.

At the beginning of Paradise Season 1, AshLee immediately jumped on Graham, asking the rest of the women on the island to refrain from giving him their date cards. But while Graham was weirded out by that in the moment, he must have also been thanking AshLee for saving him from getting bitten up by fire ants on the date he almost went on with Clare.

2. The Fact That Ben Brought His Love Letter To Paradise

The moment when a bunch of the cast confronted Ben about having a love letter from another woman was a typical Bachelor reveal. But have you ever stopped to think about how crazy it is that he even had this note, planned or not? Ben's packing list seemingly went something like "sunscreen, flip flops, six pairs of shorts, and... this love letter, just in case."

3. All Of Those Ridiculous Necklaces

Particularly during Season 1, all of the male cast members spent all of their screentime without wearing a shirt, meaning they needed to wear some seriously embarrassing puka shell necklaces to hold their mics. Lately, the cast has been a little less averse to covering their torsos, but occasionally the shell necklace makes a reappearance.

You'd think that the cast members on a hit TV show would get sweet perks, like unlimited wardrobe or makeup artists and hairstylists to help them look their best on camera. But it turns out that according to After Paradise , this style all comes from the cast.

5. Chris Bukowski Dated Through The Pain

When Chris injured his knee, it was clearly pretty bad, and he was obviously in a lot of pain. However, he paused heading to the hospital to continue his overnight date with Elise. Talk about playing through the pain!

Chris Harrison in a short-sleeve shirt is one of the show's underrated qualities.

7. The Amount Of "Quitters"

Almost a third of the participants in Season 2 wound up "quitting." At that point, I feel like that's an unnecessarily harsh description of what was going on. Maybe rename it "Voluntary De-Rosening" or something, because every episode someone decided that they'd like to be eliminated from consideration.

8. When Carly Went To The Fantasy Suite Instead Of Her Brother's Wedding

Carly chose an overnight date with Kirk over her brother's wedding, but she swore her bro was OK with it, and they're still close today so clearly there were no hard feelings.

I've always wondered how number exchanges work on The Bachelor. Presumably, they can't be using their phones, and every episode, someone goes home. Do they put their phone numbers on Post-It notes, old school style? Anyway, Ashley I.'s rant was one thing, but the fact that she had Kaitlyn on speed dial is arguably stranger.

Joe was incredibly villainous, openly admitting that he was stringing people along. But, what about the way that Samantha conspired to meet up with him too, then dumped/un-dumped/dumped him again, yet really didn't get the villainous moniker? That possibly makes her the most skilled schemer in Paradise history.

11. Ocean Swimming Was Considered An Actual Date For Two Adults

It's loud, you're exposed to the elements, and It is not a great place to get to know people. But other than "there's only so many ruins and town squares to explore," I have no idea why so many date cards defaulted to simply a dip in the ocean.

After Chad completely embarrassed himself in the Season 3 premiere, it struck me that this isn't happening every episode. It seems many cast members have some good self control when it comes to over-imbibing.

13. Chad's Suitcase Must Have Been A Huge Pain At TSA

I've never seen a meat scale and deli meat get declared at customs before.

14. That Time When They Left Bloopers In The Show

Remember when a producer in Season 1 jumped off a balcony and broke both his legs? Ever notice how the producer narrating the clip can't even keep a straight face when she describes it? It's priceless.

15. The Realization That Haley & Emily Would Be Treated Like One Person

It's wrong on so many levels, yet somehow feels totally perfect for the crazy atmosphere of Bachelor in Paradise. At the moment when the captions reading "Haley or Emily" started to pop up, it became obvious that the show was having a lot of fun messing around with the Mary-Kate and Ashley vibes.

And, between that and everything else this show offers, I hope it continues on for many seasons to come.

More like this
17 Hilarious British Comedies On Netflix
By Sophie McEvoy and Sabah Hussain
What’s New On Netflix: 'Stranger Things' & 'Somebody Feed Phil' Return
By Arya Roshanian
What’s New On Netflix: A Victoria Justice Rom-Com & The Return Of David Letterman
By Arya Roshanian
Becca Tilley Confirmed Her & Hayley Kiyoko’s 4-Year Romance With A Heartfelt Note
By Brad Witter
Get Even More From Bustle — Sign Up For The Newsletter