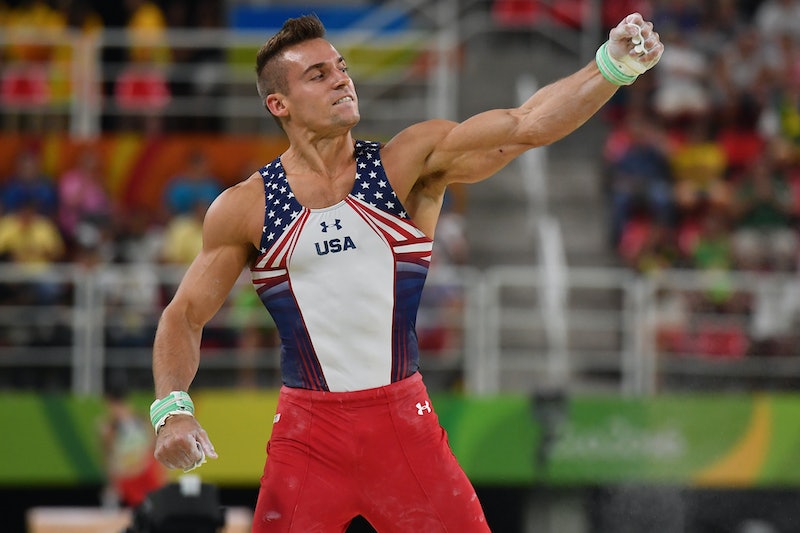 It's the one time every two years when I care about sports as much as the humans around me. It's really not hard to get swept up into all of the action of the 2016 Rio Olympics. Of course, aside the athletics, there are also the personal lives of the competitors to examine as well. So, is Sam Mikulak single? The Olympic gymnast on Team USA has been turning some heads — namely mine — not just with his superior showings in the athletic arena, but also with those dimples.

The good news is that it seems like we're all still in the running for that gold medal. The 23-year-old athlete hasn't handed down the official word on whether he's single or not, but a glimpse through his social media would seem to suggest that he is currently without a girlfriend. (Which honestly doesn't surprise me, given the amount of time and energy and focus it probably takes to, y'know... qualify for the Olympics.)

Although Mikulak did reference his significant other as recently as March 2016, the last trace we can see of any romantic partner is a little over a year ago, when Mikulak and his then-girlfriend Anissa Ciani celebrated their anniversary. However, in that interview with NBC leading up to the Olympics, he named Cinque Terre, Italy, as his favorite place to visit, saying, "I went to visit my girlfriend who was studying abroad." But it's unclear if they are still together, considering there haven't been any pictures of the two for the casual fan to look through all year.

It appears the couple was together for two years, after meeting at the University of Michigan, but possibly didn't make it too far beyond that two-year mark;.Ciani's social media and graphic design website currently states that she's on a cross-country road trip from New York City to Orange County. I can't imagine that she would have embarked on such a trip if she and Mikulak were still together. More likely, it's a very smart way to keep her mind off of the international event that her ex-boyfriend is currently competing in, and Sam Mikulak is still on the market for the rest of us. That's great news for those of us with active fantasy lives inside our own brains.

But it's also bummer news, because look how cute they are. With the situation so unclear, here's hoping that Mikulak gives us a definitive answer one way or another soon.