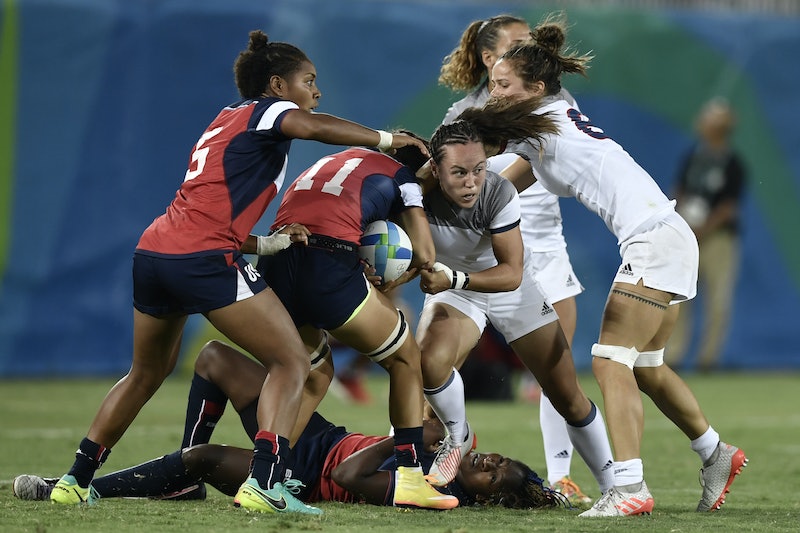 As someone who can barely afford a monthly gym membership, I've recently spent a lot of time wondering how Olympic athletes make a living. Like, how can they possibility afford all those years of training? And then once they got to that seriously competitive level, how did they afford the maintenance and upkeep? The equipment. The trainers. The injuries. How much does the cost of staying in top physical fitness put one back, financially? And how much does it push you forward?

Olympic athletes don't have much room for anything in their lives beyond training — a notion that leaves people with a lot of questions like, how do they have the space and means to worry about bills? How do Olympic athletes pay cable bills? How do they get their sports bras and protein shakes and doctor bills and massages? Sure, if they end up becoming famous in a popular sport, sponsorships and endorsement opportunities roll in and that's a great way to make money throughout the year — but what about when you're not a household name and your face isn't on cracker boxes and toothpaste tubes?

Here's a fun fact that might blow your mind and make you rethink the way you regard Olympians: a lot of them have normal jobs. They're teachers, they're coaches, they're writers, farmers, firefighters, nurses, members of the armed forces. That's right — for many athletes, working their asses off at normal jobs is the cost of chasing after their dreams. Because until you're winning medals, you're worrying about paying your rent and buying tampons.

In recent years, athletes have gotten creative and started GoFundMe pages for themselves and their teammates. Short of asking for money from supportive communities, some of these athletes are option-less when it comes down to it. It's incredibly difficult to work full time and have the time to train enough to be in a strong position to qualify. Olympic training isn't really something you can half-ass. So for the people who have managed to work full time and qualify, hats off to you! These are some of our last summer Olympics full time employees:

This triathlon runner worked as an accountant at Ernst & Young.

This Norwegian marathon runner also worked as a janitor.

This American sailor helped out at her family's Italian ice shop whenever she could.

This Russian Javelin thrower was in the Armed Forces.

This Australian water polo player worked as a research analyst.

This Australian kayaker worked as a nurse when he was in the off season.

This Haitian jumper works as a attorney when he wasn't on the track.

Surely these brave, ambitious and hard-working souls will inspire you to cut back on the complaining when the going gets tough. If you want something in life, you have to go after it. There's always someone willing to try harder. Let that person be you. And also, like yes, you can make it to spin class after a long work day. I believe in you. So do these guys.

More like this
5 Crystals To Manifest More Money
By Megan McCarty
What Is Jeanie Buss' Net Worth? The Lakers President Is Uber Rich
By Hugh McIntyre
Your Home Could Seem So Much More Expensive If You Tried Any Of These Cheap Tricks
By Dena Ogden and Sara Brown-Rigoli
Are Gemini & Cancer Compatible In A Relationship?
By Kristine Fellizar
Get Even More From Bustle — Sign Up For The Newsletter