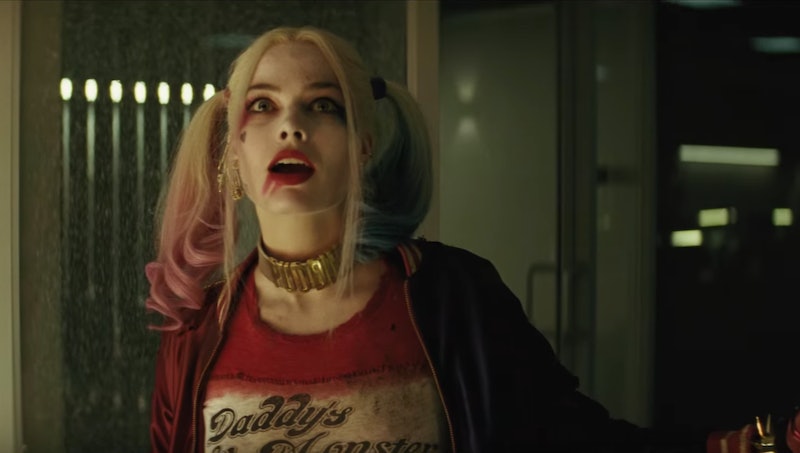 Suicide Squad might be earning mixed reviews from fans and critics, but that hasn't stopped audiences from flocking to the movie theaters. And, as with any hit superhero movie, Suicide Squad will probably warrant a sequel, perhaps in the form of a Harley Quinn spinoff. The potential spinoff would reportedly feature Harley Quinn alongside other DC female characters Batgirl, Poison Ivy, and Katana, according to The Hollywood Reporter. There's no question that a movie that would bring Harley Quinn, Batgirl, Poison Ivy, and Katana (a character tragically underused in Suicide Squad) would be awesome. But DC could make a much stronger film if they made a Harley Quinn origin story movie instead.

Spoilers ahead! For many fans, Harley Quinn was one of the main appeals of Suicide Squad. As a relatively recent addition to the Batman universe, Harley had never before been represented in live action on the big screen, and actor Margot Robbie is somewhat of a Hollywood it-girl at the moment. Harley was one of the first major characters announced as part of the presumed franchise, and was heavily featured in the promotional material, making her, essentially, the belle of the ball. But, sadly, in a cast of roughly nine main/supporting characters, there wasn't a lot of Harley Quinn character development, and what was shown of her backstory and her character all had to do with her relationship with the Joker.

Harley is one of the most engaging characters in Suicide Squad, but the glossy way the film portrays her love of The Joker and their relationship borders on the inappropriate. Harley isn't just a woman tortured by love, but someone who is physically tortured by her lover, a fact that is mostly overlooked in the film. She's a victim of domestic abuse, tortured into madness and left to die by the Joker. (Yes, he eventually tries to rescue her after her capture, but it hardly seems as though it was a priority.) It's a terrifying, troubling story, and although it's often hard to watch, it's definitely worthy of exploration on-screen — and yet Suicide Squad barely scratches the surface of Harley and the Joker's twisted romance.

In the brief glimpses we get into her origin story, we see Harley fawning of "Mister J" when she was meant to be treating him professionally, and then practically begging to be tortured by him. But what made her do it, how the Joker wormed his way into her heart, is never really shown or explained. What reason does she have to jump in a vat of chemicals — her final transformation into Harley Quinn — when The Joker asks? Suicide Squad would like you to think it was for love, but that's clearly not the entire story, and I, for one, want to know more.

When Harley's backstory was explored in Suicide Squad , all I could think was that I wished I was watching that movie instead. Like too many superhero films before it, Suicide Squad is filled with clunky dialogue, weak characters, and strange villains. A good comic book movie needs much more than this; dark, twisted characters, CGI bad guys, and explosions are fun for a while, but not enough to sustain a cinematic universe. Super-hero fatigue (at least where critics are concerned) is going to hit DC hard if it doesn't shift its approach to its films, and a Harley Quinn origin story spinoff could be the perfect opportunity for DC and Warner Brothers to make a change.

By focusing on a smaller, non-super power/CGI story, like Harley's initial meeting with the Joker in Arkham Asylum and her seduction to the dark side, the DC Cinematic Universe could go from over-the-top to deep and introspective. It would also add depth to both Harley and The Joker, two potential villains and heroes of future movies, and be another opportunity to explore the history between the Joker and Batman, as well as the patients at the Asylum. More importantly, telling the story of an abusive relationship in the comic book world could be extremely effective while setting it apart from all other comic book movies. Would it alienate some hardcore comic book fans? Maybe. But it could also be a great opportunity, one that would benefit both DC and fans everywhere.