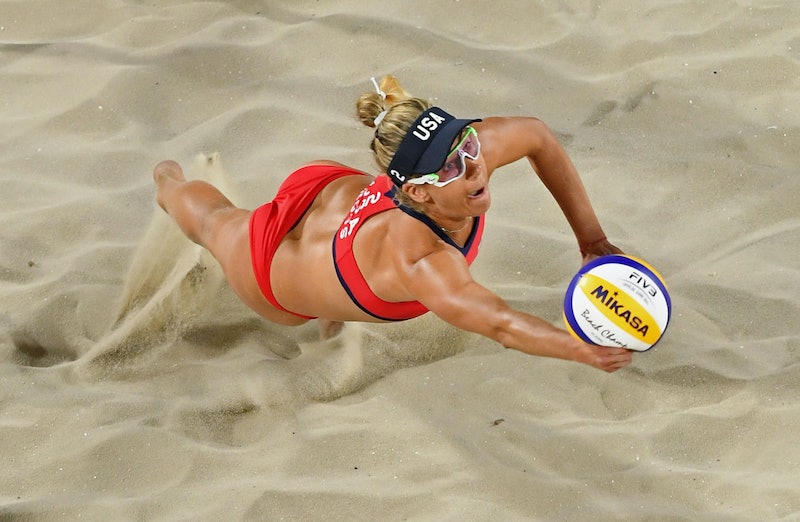 At one point in her long road to Rio, Olympic silver medalist April Ross was out of a job and out of volleyball. Following an impressive court volleyball career at the University of Southern California, Ross headed to Puerto Rico to play in a professional league, one of the few in the United States. But after just three years, Ross quit volleyball. It's a slightly atypical Olympic story, but it's a decision Ross says she's proud of, and one that has helped her get to the 2016 Rio Olympics as a beach volleyball player.

The stress from three-hour practices and insufficient training took a toll on her body. "It got to the point where I just hated what I was doing, so I quit," Ross tells Bustle. "I'm really proud of that decision because I had no idea what I was going to do, but I just knew that I didn't want to do what I was doing."

Her fearlessness in admitting she wasn't enjoying volleyball and her decision to move back home to California without a job are part of why Ross says she has no regrets in her career. Moving back home led her to beach volleyball, which has been her career and passion for the last 10 years. "I think because I made that decision, beach volleyball presented itself as an option and I got into that," Ross says.

Olympians are often the poster children for perseverance and never giving up, but that's a tough line to walk in elite sports. For every Olympian who makes it to the games, a dozen athletes had to let go of the dream at some point due to injury, finances, or just plain reality. In some ways, it's the braver decision to stop pursuing your passion when it's become impractical. For Ross, it just so happened that giving up one sport she loved meant finding another.

An old college teammate called Ross while she was working as a hostess at the House of Blues in Anaheim, California, and asked if Ross wanted to play in a couple tournaments, so she thought she'd give it a shot. Ross began her professional beach volleyball career in 2006, later winning the Rookie of the Year award from the FIVB, the sport's international body. Her success in her rookie year continued through the next six years on the tour, and earned her and former partner Jennifer Kessy an Olympic berth in 2012. Ross and Kessy faced off against the legendary duo of Misty May-Treanor and now-teammate Kerri Walsh Jennings in the finals, coming away with a silver medal.

Now that she's staring down the gold medal once again, Ross is drawing on the adversity she's faced throughout her life and career, which she says helps her feel unstoppable on the court. One of her biggest inspirations was her mother's battle with breast cancer, which Ross says giver her the power to face her opponents and a cause to advocate for during her Olympic spotlight. "My mom's battle with cancer was a really inspiring thing for me," Ross says. "To see someone so close to me go through such hard times and show such courage has really shown me what being unstoppable is about and I find strength in that every day."

"I was so caught up in the process that I just gave my all every day, and that's kind of how I got to this point. It's about following your heart and doing what you're passionate about."

Ross also cites the sexism she's faced in her sport as an inspiration for achievement. The 2012 games sparked huge controversy about the mandatory bikinis, a rule which has since been relaxed, but Ross says it still seemed like a distraction from what the women playing the sport were accomplishing. "It makes me feel like they're taking away from what we do as an athlete and how talented you are and how much work you put in because they're focused on your uniform," Ross says. "You never hear them talking about the men's uniform like that." And Ross says the sexism helped her keep her eye on the goal, adding, "It's just another hurdle you have to overcome."

And that was definitely an obstacle for Ross during the 2012 Olympics in London: "I remember in London that was a huge deal, it was the number one question that we got at the press conference — 'How do you feel about playing in a bikini?' I'm like, 'I don't care. I'm here to play my sport and wear what's comfortable.'"

Ross has an unmitigated talent for parlaying negatives into positives — maybe that's the mark of a true Olympian. She'd be the first to tell you there were hiccups on her road to Rio, but what she thinks got her there wasn't setting her sights toward the Olympics, but rather playing a sport that she loved and always working to improve. "Growing up, I was all about the love of the sport and how much I enjoyed my team and competing and trying to get better, trying to be the best I could be every day. I was so caught up in the process that I just gave my all every day, and that's kind of how I got to this point," Ross says. "It's about following your heart and doing what you're passionate about."