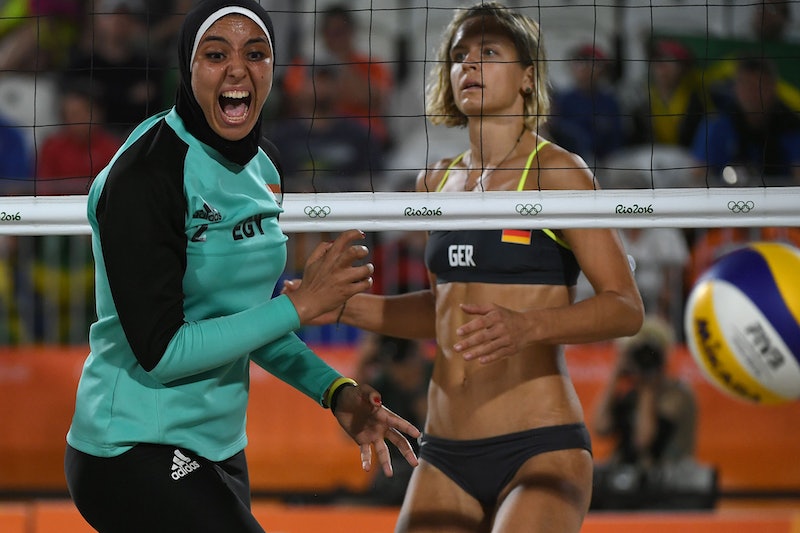 Much of the world is currently glued to social media and television to track the ongoing events in Rio de Janiero, where the Summer Olympics are underway for the next two weeks. The games are hailed as a way to bring people from around the world together to defy divisions in race, religion, and politics for a few days in order to create bonds between human beings. That spirit of harmony is being tested this year, as many expressed mixed reactions over one picture from the Rio Olympics, which highlighted the cultural collision that the games engender.

The picture shows Egyptian beach volleyball player Doaa Elghobashy wearing a hijab and long sleeves in the midst of a match against Germany's Laura Ludwig on Sunday. While some have praised the photo as a symbol of inclusion and a testament to the power of the games, others have criticized the picture and claimed it highlights "a massive cultural divide between Western and Islamic women's teams."

Despite the bad reactions from some, the games are making amazing progress toward true inclusivity, which this picture so visibly demonstrated. The London games were the first in which all participating countries included female athletes in their delegations.

The United States just fielded its first athlete to compete in a hijab this year — an inspiring message for Muslim American girls who choose to cover their heads. Brazilian women have used the event to advocate for the issues that affect them most, and they received a platform from an influential journalist. The Olympics have always had a goal to produce positive social change, and feminism seems to be one of the biggest and most important issues it's tackling this year.

This is a huge step forward for beach volleyball as well. Before the London Olympics, women were required to wear bikinis in competition, per the sport's governing body's rules. Bottoms could not exceed six centimeters in width at the hip, and tops had to be bra-style. The option for athletes to now choose what they wear and dress more conservatively not only opens up the competition to athletes whose culture requires them to cover their skin, but also gives more freedom of choice to all athletes.

However, there are still obstacles to overcome if the games are to be truly equal for the sexes. Female participation, while now universal, still needs serious encouragement and support in many countries. Derogatory comments toward women in hijab have been pouring into social media. Commentators have received flack for attributing female athletes' success to men and comparing them to men in other sports. Feminism seems to be slightly lacking in these Olympics, but the picture of Elghobashy shows that the games are on the right track, and it puts our cultural differences in an empowering light. After all, the outfit doesn't make the athlete, and women should feel confident and comfortable wearing whatever they want.