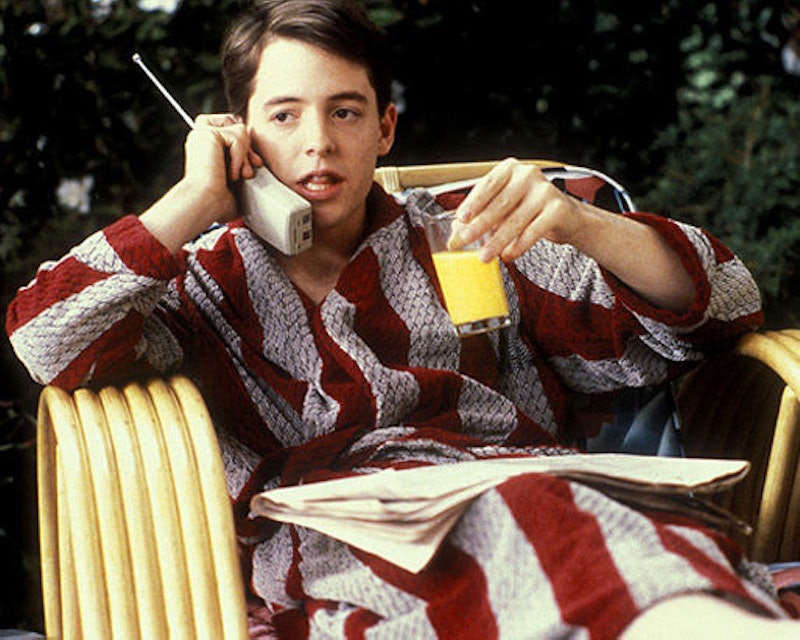 Ferris Bueller has no doubt become a pop culture icon in the three decades since the movie Ferris Bueller's Day Off premiered. As played by Matthew Broderick, Ferris was cool, confident, and charming, conniving his way to a day off of high school by faking sick. As the character Grace, assistant to the principal, says of Ferris, "Oh, he’s very popular, Ed. The sportos, the motorheads, geeks, sluts, bloods, wastoids, dweebies, dickheads – they all adore him. They think he’s a righteous dude." But looking back on the movie, which recently turned 30, I've come to a very important realization: Ferris Bueller is kind of a jerk.

Maybe it's that I've grown up and now find myself identifying with the adults in many teen movies and shows more than the kids (don't get me started on My So-Called Life), but really, Ferris Bueller is actually the worst. He's a bully, he doesn't appreciate his girlfriend, and he treats his best friend like a punching bag. It's time to stop treating this character like a hero. Just look at how much of a jerk he is to his family. Tricking your parents into believing you are sick to skip school is a natural right of passage; we've all done it. And being a brat to your sibling is natural, too. But there's something super manipulative about the way Ferris acts toward his parents and sister that skeeved me out on a recent viewing. His baby talk towards his parents while trying to convince them that he's sick is truly weird, and the knowing wink he gives sister Jeannie (Jennifer Grey) is less conspiratorial and more boastful. Usually, kids team up together to trick their parents, but Ferris makes his innocent sibling his enemy. Personally, I think it should've been time for Jeannie's day off, instead.

Ferris is also pretty awful to the other woman in his life, his girlfriend Sloane, played by Mia Sara. Now, from the get go, Sloane is a pretty underwritten character with zero personality. But Ferris also treats her like crap. Does he ever ask Sloane what she wants to do? If she wants to skip school? If she's happy? Sure, she doesn't look too thrilled when she's seen in class, but what if Sloane is a total honor student who actually excels in school? Ferris just shows up and demands that she join him. Even more, he basically confesses that it's going to be hard not to blow her off once he moves on to college, since she's got another year of high school left, proving that his phony marriage proposal is exactly that.

But the person Ferris treats the worst is definitely his so-called best friend Cameron, played by Alan Ruck. Cameron is sick, tired, depressed, and doesn't want to leave the house, but does Ferris care? Of course not. His selfishness is on full display in the way he treats Cameron. But putting his own wants and desires before his friend's illness, Ferris proves that he only cares about himself. Sure, he frames the whole day as a way for Cameron to break out of his shell, appreciate life, and de-stress, but his "tough-love" method just comes off as inconsiderate. He bullies Cameron into taking his father's expensive car, and leaves him to take the blame when it's destroyed. Cameron may come to some self-realizations by the end of the film, but Ferris gets off scot-free. His manipulations and schemes were successful, so he'll keep on doing it without consequences.

But maybe its OK that Ferris Bueller is a jerk. He's hardly the only mean, inconsiderate character in teen movies fans root for. Just think of how awful any of the characters in The Breakfast Club, Dazed and Confused, or Can't Hardly Wait are to their fellow teens and the adults in their lives, and yet are still loved by audiences. And maybe, the point of watching a movie like Ferris Bueller's Day Off isn't to worship or identify with the lead character, but to learn from them. Many Ferris fans are probably much more likely to feel resemblance to Cameron or Sloane, more "human" characters, than Ferris himself. Perhaps there's a lesson to be gained from all of Ferris' scene-stealing actions — that it's important to notice bullying behavior, and have sympathy for others. That may not be the original intent of the movie, but it matters that some people are starting to notice that a day off isn't all fun and games.